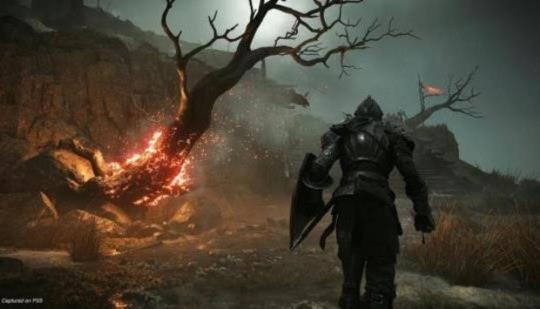 Bluepoint’s PS5 launch title was one of the highest-rated games of 2020 and received widespread praise in particular for its visuals, which many perceived to set the bar for new-gen console games.

Speaking in the latest issue of Edge magazine, which is on sale now, the From Software designer revealed that he’s not played Sony and Bluepoint’s remake of his 2009 title, but he suggested that its impact has been felt by Elden Ring’s development team.

videogameschronicle.com
Credit url:https://immersedgamer.com/m...
- Comments (42)+ Comments (42)
TopNewestOldest
Expand all
The story is too old to be commented.
147d ago

I don't think anyone plays any of the Soulsbourne games for the graphical fidelity. It's all about the gameplay, the same will be true for Elden Ring.

I wouldn't say I play for the fidelity, but I actually enjoy the graphics in Soulsbourne games. They have a certain charm that I've come to appreciate now - even dark grey tones of BB with all its chromatic aberration.

The sound of parrying, rolling, hitting, backstabbing; it's all what makes these games uniquely Souls.

Graphics and art design are two different things. While both are technical and creative, art has no limitations whereas graphics do based on the hardware. Graphics relate to stuff like lighting, textures, draw distance, stability of the image and input resolution.

I think a lot of people play From Software’s games due to their superb art design, lore and atmosphere, and gameplay and customization.

I absolutely understand that, friend, but I would consider overall fidelity to be a combination of the two, even though they are indeed different. I guess I could say that I enjoy the overall look of all of the Soulsbourne games.

It doesn't bother me that these games aren't the most mindblowing at the technical level, and I actually appreciate and find charm in the limitation combined with the art style, atmosphere, and level design.

The lore, atmosphere, and design are absolutely what make these games along with what I mentioned previously. I find DS1 to be groundbreaking in the level design aspect. Surprise, that door leads to the beginning of the level! Very cool.

It is 2022. The days of having to choose one or the other, graphics vs gameplay should be long gone. The one area that has continually lagged is AI. It is one of the reasons there is a new PvP survival game launched every other day. An environment, some mechanics, poof. It isn't that difficult.

But look what Valve did with the original Half Life AI. Look at the combat sequences with the Assault Troops. The AI was limited. It couldn't do things like run and reload. But they did force the AI to reload. Only one AI could talk at a time. But Valve's implementation, level layouts, and encounter designs were so smart it made the AI seem smarter. It has been almost 10 years since the first AI beat the Turing test. Great implementations are long overdue.

BB had the most impressive architecture and object textures of all the games short of the remake of DeS.

Hard disagree, I just bought Demon Souls because it looked incredible on the PS5. I'm enjoying it even more than Bloodborne (which is the only other Soulsborne game I've played).

The PS5 exclusive Demon Souls is absolutely a graphical showcase, and is an all round technical masterpeice... but it is a Remake that wasn't developed by FROMSoftware.

Yup, I mean the games look great, just not stellar like some out there. But the gameplay and exploration is what it's all about.

FromSoft’s modern games have always been more artistically impressive than technically impressive. Every Fromsoft title I have played has had a mixture of the following visual flaws: performance issues, frame pacing issues, low poly character model and dated textures.

I’ve watched several sections of the Elden Ring tech test. Frankly, Elden Ring, looks artistically very nice. However, it looks pretty similar to Dark Souls 3 and too a lesser extent Sekiro. Being a cross-gen multi-platform title, I don’t expect Elden Ring to look better or even on par with Demon Souls (2020). Plus, there seems to be heavy assets recycle from Bloodborne,Dark Souls 3 and Sekiro.

Elden Ring on a high end PC should look comparable to DS PS5. Hopefully it's a decent PC release.

How? It’s literally cross gen. DS was BUILT for the ps5. Elden isn’t.

They should just do a co-production with Blue Point for their next game and really blow people's socks off.

Yeah they should. Honestly think that bluepoint has the skill to do a souls like game IP that really competes with from software.

Seriously though, bluepoint really outdone themselves. Fromsoft aint big on crazy and amazing visuals but more about the art, design, and gameplay as their biggest strengths so you guys just worry about that. Although the remake does make me hungry for another fromsoft game with those amazing visuals....bloodborne maybe?

As a massive fan of From Software, I personally really enjoy the art design in their games. The way they weave the lore of the world and characters into the visuals as well as making everything look cool and interesting puts them near the top of the list when it comes to art design in video games.

However, I have to admit that when playing through Demon Souls 2020 I couldn't help but reflect on how incredible it would be if From Software were able to improve on the technical aspects of the visuals in their games too. The fact is, Demon Souls remains one of the best looking games I have ever played and the idea of From Software stepping up to the challenge of improving the technical aspect of the visuals to match the incredible standard of the artistic quality of their games, really makes me excited.

I felt exactly the same.

If they can solve frame pacing or stable frame rate it will be good experience, buuuuuutttttttttt...
Game and gameplay looks awesome.

I fired up Dark Souls 3 the other day and it is starting to show its age after playing Demon Souls. While I still enjoy playing Dark Souls 3 and the other games, I hope Elden Ring is at least a small step up in graphics from their older titles.

...I feel the same way bro, but I don't blame them. The game is also for last gen that's why. Just hoping that next time developers should make games for current gen first then port it to last gen after a couple of months.

Its not really fair to compare the two. Demon Souls is smaller game with small environments Elden Ring is open world.

Well duh. It is a last gen game.

Ah, the graphics vs Graphics debate. But what do you mean? Yes!

From software was always between ugly graphics and ok and for the gameplay it depends, it was between ok and very good.

This is what I was suppose to write :

From Software was always between ugly graphics and ok
The gameplay, it depends, it was between bad and very good.

Im not sure about that since Elder Ring it doesn't look it has the same visual quality of PS5 Demons Souls, Elder Ring looks good from third party game point of view.

I hope the rumors of BP making Bloodborne 2 prove true. Imagine what they can do with that game?

Fromsoft has a really cool eye for artistic design that really goes a long way, which is why some people still prefer the original. The dragon in the opening for example just has this gravity to it. The color in a lot of locations don't have the same desolate atmosphere and some character designs were made less unique.
Both studios have their strengths and Fromsofts has effected the entire industry. You can't make a game with blocking and dodging anymore without it being compared to DS.

Demons souls is a beautifully detailed game, I'm replaying it right now and can't get over how good it looks. With the tech behind these new consoles why not have both great gameplay and graphical presentation.

Because it’s cross a generation title and not built for next gen?

They never were great in graphics department and the they were technically flawed. The carrying power was always the art style and gameplay. Still I think it would be stupid to compare linear PS5 only game to a multiplatform open sandbox game that is also being made for last gen.

Elden Ring: Fingers on the Pulse of Nostalgia

7 Best JRPGs on Xbox Series X/S and Xbox One, ranked