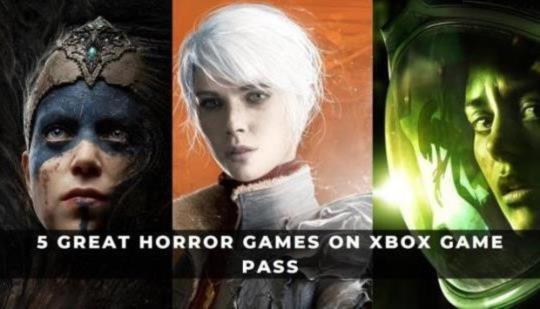 When it comes to horror games, there are incredible experiences out there for you to get jump-scared indefinitely, or maybe just to survive in a dreadful and creepy environment. From The Evil Within to Alien: Isolation, on Xbox Game Pass there is a plethora of great horror games, covering all the categories inside the spooky genre.

Was this article written a week or 2 ago? Man of Medan is no longer on gamepass, it was removed last week.

Hello! Thanks for bringing it up to us, we checked with the Author and there was indeed a mix-up with his list, which he has addressed and corrected. Thank you again!

It’s pretty good although my favorite is medium so far. Blair witch was great after it got patched up too.

You should play condemned criminal origins before all of these. There is a lot of talk about survival horror lately but it’s always about bullets. In condemned the bullets were limited but you can also pull a pipe off of the wall. It’s my favorite horror game of all time and it still stands up. It’s the only game that ever “got me”. I was creeped.

If Xbox made another condemned that would be an absolute win imo. Its time. Dead rising also.

Condemned was multi platform, so it wouldn’t be up to Xbox, but SEGA.

That said, I’m down for a new one regardless!

Was criminal origins on PlayStation? I know bloodshot was. Regardless, Xbox paid a bunch of money for games that ended up going multiplat like dead rising and bioshock. I don’t care what systems it ends up on but let’s face it, ms is the most likely to invest in a condemned game. Simply because they have already on the 360. I wasn’t fanboying or trying to troll you.

Condemned criminal origins was an exclusive to xbox consoles, PS got the sequel bloodshot.

I own the game, on both PC and Xbox, so I know. Hence why I said “Condemned” and not “Criminal Origins”.

On top of that Criminal Origins was only exclusive because of timing (no PS3 when either the Xbox nor PC versions released). Bloodshot was another matter. So, my point stands.

I think a new Condemned would end up multi out the gate. MS invested in far bigger projects that are now day/date PlayStation releases too, such as Mass Effect.

Anything is possible, but that’s most likely of outcomes, I’d say.

If whoever owns it self published sure. Like if sega just made another condemned it would be multiplat. The series is essentially dead though. I think 2 killed it like fear 3 killed that series. It would take somebody like Microsoft nudging sega(?) and being like “hey, how much for a new condemned? I got a studio.” For it to happen.

If it were to happen at all, I’d say a timed exclusive for MS. I’d be more than happy if Sony made that investment though. It’s just a little sketch after the last bomb and I don’t see them making it rain like Microsoft did and does. They did just snag deathloop for a year though so who knows.

I'd be down for another Condemned. As long as it's like Criminal Origins and not like Bloodshot.

Condemned, what a game, another great game is F.E.A.R series, now that game gave me a few jumps.

I don’t see a timed exclusive at all. Like I said, the first one was only exclusive because the PS3 wasn’t out yet.

If it’s to ever happen, it will be PS5/PC/Xbox Series day/date.

Not on gamepass unfortunately

Oh really? I could have swore I saw it, my bad yo. It’s worth the 5 bucks or whatever they charge now. Highly recommended

Amazon Slashes Up To 67% Off On Select Games