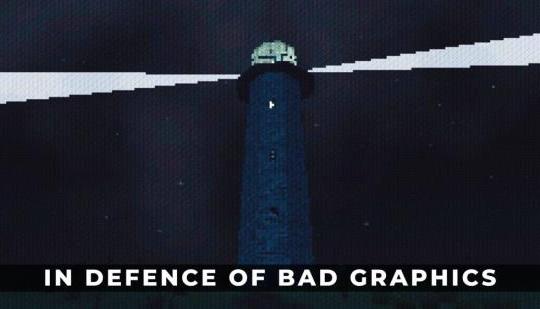 In Defence of Bad Graphics

KeenGamer: "Let's look into why we shouldn't be quick to dismiss games with bad graphics. As game visuals grow increasingly elaborate and powerful, there’s a forgotten power to the mysterious, indistinct styles of retro games. When playing a horror experience, there can be a lot more to fear from all the things you can’t see, rather than those you can."

Let me shorten this opinion piece. Dont judge a book by its cover.

Or a game by its cover.

Graphics only matter when it's time to marginalize one of the big 3 in the console war. Otherwise, they are a nice-to-haves, not a must. See Hades as one example. Gameplay, narrative, art style, atmosphere, voice acting...loading speed, framerate....usually all more important. I like good graphics, but they don't make the game.

Graphics are the marketing sizzle to the steak of gaming, but their value beyond a certain point wears off rather quickly when playing in earnest, in my experience.

Hades is a terrible example. That game's art is crisp and clean, unlike some "8-bit" diarrhea other developers have released in recent years.

I don't care about them, not for story based games anyway. This author is referring to an indie title that intentionally went for ugly graphics as a stylistic choice, but I've always found that even in the realm of the major release market (not necessarily AAA, just boxed-release, big commercial titles), Fallout New Vegas was always a bit of a dog (although I'd argue the graphics kinda has a charm to them) but is my favourite game ever. The shit graphics were not intentional but it was fine. There are SO. FEW. games made like that, where the graphics are merely a 'serviceable' 3D kinda thing but just to support an amazing story/quest design/rpg mechanics.

For example, I'm on PS5 now but I'd HAPPILY play a game on it with PS2/PS3 level graphics if it had something compensatory like amazing destruction, a fully-explorable open world (with lots of interiors etc), advanced stealth/ai, or complex player interaction . Ultimately, I'd wish games started going more for everything besides graphics, as a lot of the stuff that drew me to videogames in the first place has been at a dead standstill in recent years.

Agreed! Especially at the standstill part.

this is so wrong. graphics and art direction are two completely different things. bad graphics is the bad implementation of certain graphical techniques. bad lightning, bad render, or even animations, not the chosen artistic way the game should look. Mass Effect Andromeda has bad graphics, Celeste and Stardew Valley do not.

Repetition in Video Games is Great