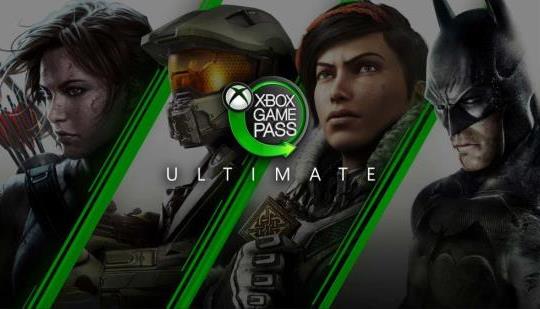 Get three months of Xbox Game Pass Ultimate for $24.99

Get EA Play, over 100 AAA games available, free games every month, free perks on games, and more with three months of Xbox Game Pass Ultimate for only $24.99.

The amount of quality games you get with the service is insane. Especially on Xbox, where there's a bunch of past gen titles. Everything there for you to download. No need to stream, unless you want to. Definitely the best gaming service on the market; especially for a console gamer.

As a PC guy, I'll happily admit that. I wish they found a way to have access to the 360/original Xbox titles without streaming, but it is what it is.

I brought a whole year n only spent 100 dollars

@Brazz
I mean it depends. New, fairly new, and ofc all of mcsfts first party AAA games make it on gamepass. Really though you should just buy a single month for specific games you want to play and then once your done with those games, go ahead and cancel.

I love how people talk about how great Game pass is when its $180 a yr (which is the one I'd be interested in) or $120 a yr for it with XBL (WHICH IT NEEDS!) was is not cheap!j. When I was averaging like $30 a yr for XBL. And I also dont like how the games are rotated out.

look for deals, they are out there, you dont have to pay the full 180, im set for 4 years with ultimate for that price basically. its a steal, if they release 4 good exclsuives a year it more then pays for it and everything else is a icing on the cake and theres a lot to play with, over 350 games to choose from

Whats really funny is how "good" it supposedly is yet all you ever hear people say is that they'll repeatedly cancel and re-sub later if something they like comes a long. Doesn't sound like that great of a service if you're frequently canceling and re-subbing. Also trying to convince people they're going to get to do that for a dollar forever is ridiculous.

That's what happens when you believe all the internet try hards and associate that with an entire install base.

If you believed everything people said on the internet, half of the people here on N4G would all have a series X/PS5 since launch, and are running 3080ti on their PC.

At the end of the day, if you need to create a new gmail account every month just to circumvent a $10 - 15 monthly fee for new games, you probably shouldn't be gaming. I'm going to assume that's a vast minority though. Like Netflix I'm sure the majority just subscribe and let it do its thing.

To address the narrative you're trying to create though, people circumventing the system says nothing about the quality of the system. It just shows you how cheap people can be, if anything. Though, again, I think you're attributing the actions of a minority to the whole.

Xbox Live didn't give you day one 1st party releases. Same as 3rd party games, as well as those that released just a few months prior.
It also didn't allow you to stream games on almost anything with an internet connection.

There's a bit of a difference there.

You're a fool if you're paying $180 a year. I've routinely gotten 3 months XBOX Ultimate for $20-30. It just depends on the time or major titles releases. I have almost 3 years worth and I don't think I've spent more than $200. I'm good until August of 2024 on both PC and Xbox. Last year CD Keys were selling 3 months of Ultimate for $20 each. The 1 month was under $10 so I snagged a few of those. All said and done I added over two years in addition to my 1 year after I converted Xbox Live Gold to Game Pass.

You can even use gamepass on the Ipad

Target also has this deal

Probably but I can't confirm. I've just being doing yearly for $75. My year is up in March so I'll find out for sure around then.

Yes the conversion is still working. I wouldn’t be surprised if you could get 3 years for less then $181.

Buying gold and converting with 1 month GPU is still the cheapest way but for people looking to extend current subscriptions then $25 for 3 months is a good price.

Bought 6months worth today from GameStop at this price

Who cares. This comes across as paid advertising, let’s see some real articles about actual games.

How is this any different than when people post Amazon game deals almost daily here?

Oh wait; you don't feel the need to speak out because they aren't MS/Xbox. Just going by your post history.

There had been a lot lately. If you strictly talking about first party games, they recently have Flight Simulator (console), Psychonaunts 2, Age of Empire IV, Forza Horizon 5, and Halo Infinite Multiplayer, with Campaign coming next month.

So what more game do you want to talk about?

I just find it funny we constantly have articles talking about sales on games from all avenues, but it seems to be ones focusing on MS that tends to annoy most here on N4G.

This is a great deal.

"I buy all my games physical"

"Gamepass is too expensive"

I got a bunch of them at Target.com recently

PlayStation Store Sale "Games Under $20" Now Up for Jan. 19, Over 400 Titles Discounted