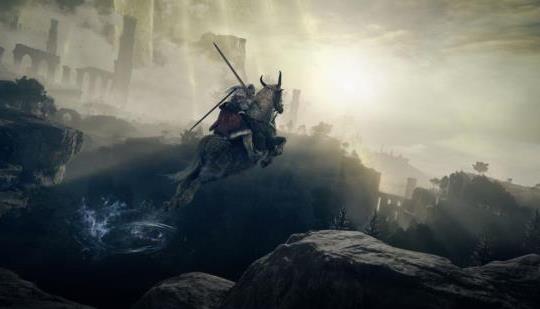 Gamesradar: "In case I wasn't clear in my Elden Ring hands-on preview: this is one FromSoftware-ass game, y'all. If the test build I played was leaked before Elden Ring was announced, I probably would've assumed it was Dark Souls 4. It looks and plays very like a Dark Souls game, and like the games it builds on, it has nothing but scorn for the player, at least outwardly. It's an openly, almost comically hostile game at times, and its rules are transparently punishing.

That's what I thought, until I played more of it. Because the more I played it, the more welcoming Elden Ring felt. By using its RPG elements to cut through the ruthless reputation of the Souls games, Elden Ring enables and empowers players in ways that previous FromSoftware games never truly did, creating an approachable sandbox that loudly tells you to overcome challenges however you see fit. As a result, it's on track to become one of the studio's easiest, most enjoyable, and most approachable games."

Adhttps://www.youtube.com/watch?v=IJUbGKExS0A
- Comments (7)+ Comments (7)
TopNewestOldest
The story is too old to be commented.

“As a result, it's on track to become one of the studio's easiest, most enjoyable, and most approachable games."

Great to hear! I might actually give this game a go.

I've heard this from a few outlets, but they all say the game is still "hard" generally, which I like.

I think part of the "approachability" is the open-ended nature of the game; you can do things in the order you like to some extent.

I hope that's all it means because I live for From games and their style of difficulty.

Its approachable because you can go anywhere, but I bet when you get there you'll want to be some place else

I should clarify that I’m talking about being more approachable now. I like the fact it’s open world and you can pick which enemies and bosses to fight when you choose to do so.

I’m not against difficult games. However, I will only enjoy a difficult game if I enjoy the core gameplay. Unlike Dark Souls and Bloodborne, I didn’t enjoy Sekiro’s core gameplay. Therefore, I never finished Sekiro. I never finished Sekiro because I found the gameplay unrewarding, unlike Dark Souls and Bloodborne [two games were some bosses nearly broke me…and my controllers…].

Sekiro combat is rewarding once you get the rhythm down. I think souls fans try to play it like it's souls, and it is but it's also an evolution on souls. Just like souls it's absolutely necessary to learn enemy attack patterns, but parrying and learning when to strike are critical. Get greedy and you'll get punished. Once you git gud you'll feel like a boss, and like nothing FROM throws at you can faze you.

Minstrel : [singing] bravely ran away away...

Minstrel : [singing] When danger reared its ugly head, he bravely turned his tail and fled.

Sir Robin : I never did!

Minstrel : [singing] Yes, brave Sir Robin turned about, and valiantly, he chickened out.

Minstrel : [singing] Bravely taking to his feet, he beat a very brave retreat. A brave retreat by brave Sir Robin.

Minstrel : [singing] He was not in the least bit scared to be mashed into a pulp Or to have his eyes gouged out and his elbows broken To have his kneecaps split and his body burned away And his limbs all hacked and mangled, brave Sir Robin His head smashed in and his heart cut out And his liver removed and his bowels unplugged

Best Games to Play to Get Ready for Elden Ring