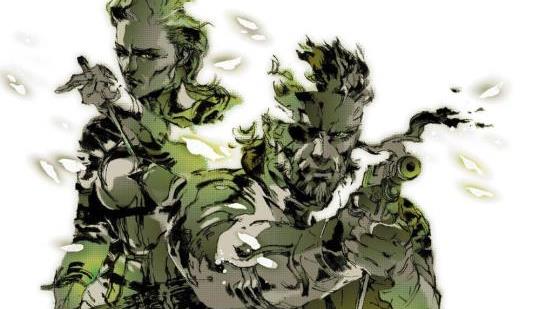 Kojima looks back on the creation of Metal Gear Solid 3

This week Hideo Kojima has been sharing some stories in celebration of Metal Gear Solid 3: Snake Eater's 17th anniversary.

Recently there have also been rumors of a MGS3 remake being in the works, but I'm not sure whether to believe them.

MG3 still hold up well I would say. I'd rather see a MGS1 remake if they don't screw it up.

Yeah I agree. MGS1 would be a better choice. But the latest rumours I read were about MGS3 being remade. We'll see I guess.

I'd be very concerned they would screw it up. Just look at GTA: DE -- it has made a mockery of the originals.

MGS1 has already been remade. Twin Snakes.
I'd rather not have a remake of a remake.

Still one of the greatest games of all time and the best MGS entry imo. Sure the plot was convoluted as always but it felt more grounded overall considering the supernatural aspects were mostly present only in the boss battles (which were amazing). I'll never, ever forget THAT ladder climbing scene with the soundtrack playing the whole way...

LucasRuinedChildhood434d ago (Edited 434d ago )

I suppose it's because they're the origin stories of each era of the franchise but MGS1 and MGS3 are the most grounded mainline entries and easy to jump into.

I have a very special experience with this game.. I had a ps1 since the beginning but never been interested in MGS. PS2 came out this series still not my thing.
One day I bought MGS3 very cheap and decided to play it. Didn't catch me either but forced myself to play it anyway and I made it to Sokolov. I started to be addicted and never let go of it until I saw the credits screen..
This was my first MGS game which is also the first one in the chronological order.. I played Spec Ops on PSP with Boss, the direct sequel to it. Then I played MGS2 then 1 on game cube... I had like 2 of my best gaming months ever

Agreed. I frequently harp on about my love of Snake Eater. It definitely feels more grounded, but I also wonder to this day if the supernatural elements were exaggerated and not intended to be literal. It felt like all of the most significant figures to the plot had the least supernatural ability, if at all: Ocelot, The Boss, Naked Snake, and EVA were all pretty "normal". The COBRA Unit's only significant member to the plot, The Sorrow, was an exception, but it was also a brush with death that triggered his appearance. So it's questionable how supernatural that really was. It was definitely a game that played with your perceptions of reality, and I liked that. It's never explicit. The implication is that all of that was really happening since there was no indication of hallucination etc., but it did feel like Kojima made a concerted effort in later entries to explain away the mysticism of the series.

One of the great questions I ponder on.

Speaking of the ladder scene, have you seen this? https://www.metalgearinform...

MGS3 was imo the worst one of the mainline series. They took no risk in the writing and setup unlike MGS2

This was the first game in the series that took place in a different time and different kind of environment, you also played as what was essentially the villain in the series.

Best in series along side Peace Walker. Also it was the most drastic change in the series, hell you get to play as who essentially is the big bad.

It was the set up of the entirety of the Metal Gear series. That’s a huge risk of failure there. Plus it delivered a more emotionally charged story. Playing as a man who is torn between his duty, his country, and his mentor. In lesser hands, that would have fallen apart or flat.

My least favorite Metal Gear. Total Departure from part one in style and atmosphere and character creation. Hated this game. Let the down votes begin!! Hah!!! (and part 1 and 4 are my favorites in the series)

I know it's your opinion but just can't understand how would you hate 3 while loving 1 and 4. I like all of them but 3 is perfection IMO. Some of the best bosses, smart use of the gameplay to tell a story, and a smooth deploy of the argument towards the epic final battle, which feels surprising and natural at the same time. Almost no movie or game achieves that.

Bacano!! You started off your statement just perfect I have no beef with your love of part 3. Hmmmm, let's see what can I say to describe my hatred for it. Number one I played the original release before they fixed the camera options. So, I spent most of the time getting caught because I was essentially blind to the presence of surrounding guards. Then I simply had ZERO interest in surviving off the land. I hated finding food to eat and experimenting with random reptiles and insects to see what effect they would have. Not interesting at all for me. Then the bosses imo, were simply corny. A geriatric who falls asleep, a mystic bee keeper, and the boss who is a woman with a disgusting scar down the center of her chest and guess what, she trained Big BOSS, uuuhhhhhhhh, no. This game stepped so far away from Metal Gear that I couldn't wrap my brain around it. Had it been called something else and was original maybe I would've made more of an effort to stick with it but going from Shadow Moses Island to that forest was just not my cup of tea at all. It didn't feel like Metal Gear. I hated part 2 because of being forced to play with a supermodel instead of Snake but I stuck with it and beat it and didn't like it any where near part 1. Honestly I stuck with it because I'd gone to E3 that year and Konami ended up putting my gameplay and face in one of their live demo reels and it got shipped with PSX magazine so that pushed me to continue. Shallow, I know, heh.

MGS4 is easily the worst of the series such a let down story wise and let’s not get started on chapter 3 that whole part should of been left out the game. MGS4 and MGS are probably my biggest gaming disappointments in a long time.

Well, I think it's safe to say pietro you suck, lol. Ok, ok, that was mean. Kinda the point though right. No, really pietro I wouldn't mind having you over for gaming session because going off of your taste, my collections completely safe and I know you wouldn't steal a thing.

I'm really just kidding you with you. To each his own. That's all I ever say. Game on.

I meant MGS4 and MGS5 are my biggest gaming disappointments, MGS (that game is amazing)

Hands down one of the greatest games I’ve played

This is the only one of the mainline games I didn't complete.

What a series. MGS3 is soooo good. 🎶Snake eaterrrrrrr🎶

My favorite Metal gear game. Everything about it was great. I hope the rumors of a remake are true.

Best game in the entire series...

Next month, MGS Snake Eater remake will be announced.

Well, remake or not, they should at least port the games to current gen systems.

Imagine if MGS3 got the Demons Souls treatment 🤤