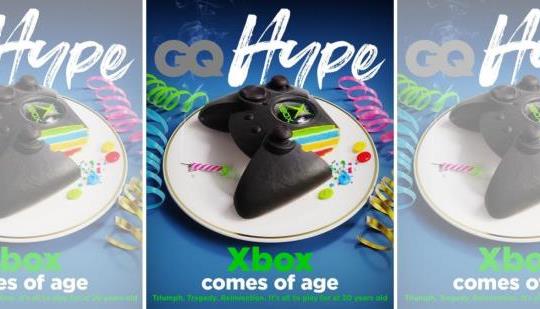 From GQ Magaszine: "Phil Spencer saved Xbox. Now he wants to reinvent gaming. Ahead of Xbox’s 20th anniversary, we sat down with him and Microsoft’s gaming A-Team to discuss their wildly ambitious future including Game Pass, Xbox Cloud Gaming, Halo Infinite, The Elder Scrolls VI exclusivity and more."

Wait did this just say elder scroll 6 was exclusive??

They strongly implied it. They also implied Papa Spencer will be retiring soon.

Heres some points of interest from the interview on Gamepass and exclusivity:

“Something like 75 per cent of a game’s revenue used to be made in the first two months of release,”

“If every single person plays Sea Of Thieves on Game Pass, and we don’t sell a single copy. Are you kind of cool with that?’” Spencer was categorical.
“Absolutely.”

"In the end, Sea Of Thieves had a great launch, people still bought it and it was heralded as Rare’s return to form. But more importantly, it proved Game Pass could work. The economics were “100 per cent a success,” says Bond. Xbox’s business model transformed. Since then, every single Xbox Game Studios game, no matter the size or budget, has been released, day one, onto the service. Major publishers such as Electronic Arts, makers of FIFA, have partnered with Xbox Game Pass too. The 18 million subscribers spend 50 per cent more than non-subscribers. A game’s average engagement goes up eight times when added to Game Pass. And player experimentation within genres dramatically increases. Three years after release, Sea Of Thieves just passed 25 million players, and that continues to grow."

"It’s been confirmed that next year’s Starfield, arguably the biggest game of 2022, will be Xbox and PC only. Spencer says he sees the same for The Elder Scrolls VI. In his eyes, Xbox is the whole experience. Xbox Live. Game Pass. Cloud Gaming. Friends lists. Save states. “It’s not about punishing any other platform, like I fundamentally believe all of the platforms can continue to grow,” he says. “But in order to be on Xbox, I want us to be able to bring the full complete package of what we have. And that would be true when I think about Elder Scrolls VI. That would be true when I think about any of our franchises.”

Why is anyone even still questioning this? It feels like this and/or Starfield comes up on a monthly basis.

Has it though? 18 million game pass subscribers when there are billions of PCs and Androids as potential game pass users isn't a seismic shift. That's not even half of the numbers Xbone One moved and it was an underperforming console. If game pass was a console it would be well behind the pack in terms of install base considering the amount of time it has been available. With an upfront cost of zero dollars one would think those numbers would be much higher if this was really what the public was clamoring for. Could it one day have 100 million users? Maybe, but that's just rampant speculation.

"Could it one day have 100 million users? Maybe, but that's just rampant speculation."

They have been clear it isn't making them money. If they want to make money with it they will have to either raise the price, add more MTX or both. Especially if many of its users are streaming games from the cloud. The hardware and bandwidth for that doesn't come cheap.

It has no choice but to raise prices, but for now theyre in customer aquisition mode where theyll lose s ton to gain subs. So far 18 million in 5 years or so isnt that good imo. The games people actually want to play take a long time to be made. You only add so much indie filler. It may get there one day but its gonna be a slow crawl to that goal

you keep saying that GP will be getting a price hike but it hasnt happened yet. I bet you will continue to keep saying it until it does and then you can tout "see... I was right" (years later).

ApocalypseShadow63d ago (Edited 63d ago )

Darth, playing online used to be free. Then, you had to pay for it. XBL later got a price hike. They almost, sneakily, hiked it again to push gamers to game pass.

Xbox gamers used to have to pay for XBL for years just to play free to play games online. Game pass should have free online as PS Now doesn't require Plus to play online. Subscription on top of subscription.

Do you really think Microsoft, the leader in nickel and diming, will not raise the price? I need a puff of what you're smoking. It must be good.

If Microsoft outgrew the console industry, then why release a console? Because they still need the core to hang on long enough to push services and digital over physical ownership. And sit back like Valve to collect checks from a service instead of making games.

It don't take a genius to figure that out. If you can't see that, you're blind buddy. Microsoft has no choice. They have to make profit some way

Yup they are hype specialists leading the world in buying studios and writing opinions for journalists to post.

If he released high quality games 1% as often as he put out PR pieces the Xbox ecosystem would have 10 times as many banger games as Sony and Nintendo combined.

Please provide proof of your conspiracy theory. Why would journalists post opinions made by MS when PS and Switch are clearly leaders and will provide them with the audience that provides clicks and cash.

The problem I see in gaming journalism is that there are a ton of small journalists that are nothing more then fanboys for the big three console manufacturers. You look at some of the so-called "Journalism".... There is fanboyism, spelling mistakes, grammatical errors, and the articles have zero fact behind them. There are a ton of articles like that. Just makes me shake my head, and I have a good list of gaming journalists. If they aren't on my good list I simply don't click anymore. GQ, Forbes, VG Chartz, Polygon, VGC, and any gaming site with XB, PS, or Nintendo/Switch in their domain name are all garbage.

“PlayStation is no longer the competition.”

We really change stuff from being last to being last. The diference let's spend billions because we can't make a single blockbuster beside halo, forza and gears.

Sony is paying to keep final fantasy off the Xbox platform, of course Elder Scrolls 6 is going to be exclusive, they own it.

i thought so as well, but I was reading that there's apparently a whole thing going on in regards of JP devs releasing games on US based platforms. Apparently is not as easy. The article speculated that it may be simply easier to release on Sony than Sony having to pay for it.

The revolutionary practice of buying up the competition. What a risk. Also, a game rental service on top of it? So innovative and brave.

If you're getting your arse kicked with your original strategy, it only makes sense to evolve and adapt. Good on Microsoft for changing the game....what it morphs into is anybody's guess, but so far I applaud their efforts after suffering through next to nothing from mid xbox 360 thru the entirety of xbox one gen games wise.

i think you are on point imo. its actually refreshing seen more varied news out there. Nintendo news, Steam deck news, Epic , Xbox, Sony. Everybody is doing something and thats amazing.

Danganronpa gets a surprise Xbox release, and it's on Game Pass too