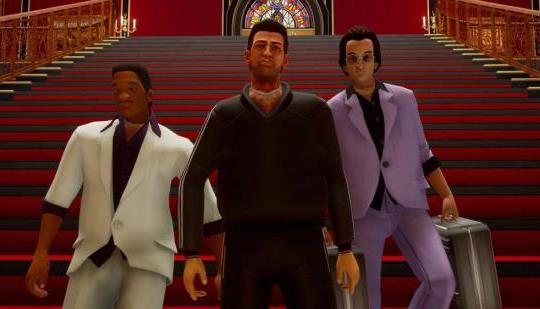 Grand Theft Auto: The Trilogy Gameplay Video and Screenshots Arrive Ahead of Release

Users with early access to Grand Theft Auto: The Trilogy - The Definitive Edition have uploaded a slew of fresh gameplay videos and screenshots.

The gameplay and visual improvements look good while not losing the feel of the original.

Looking forward to replaying the trilogy on modern hardware.

From what I've seen on YouTube I'm actually very impressed it's a significantly better looking game(s) than the early rumours and leaks had us believe.

I mean it's not hard to make PS2 games look better in a remaster on PS4/XBO level consoles.

The reason people were downplaying this is because there was already a group of people modding the PC version of these games and made them graphically close to what Take2 / Rockstar a multi-billion dollar company did for FREE. Then there are the mods people made that revamps all of the textures, events / characters, HUD, and more of GTA V into GTA 3, again for FREE. I think that's the big issue. The PC players had no need for this, but instead of just releasing this they flat out took down all the PC versions of the original games, so modders wouldn't outdo the billion dollar company, again for FREE.

Publishers hate modders they only tolerate them because the community loves and appreciates them.

To be honest I wasn't sold at first but I'm curious since GTA3 is the only game that I've played in the trilogy. I was even more curious after seeing the trailer. Now, after watching the gameplay vids, I think I'm finally sold. It's finally time for me to experience Vice City and San Andreas.

The other 2 games are a lot better than 3.

The music in Vice City on it's own makes it better, let alone everything else.

@Sully yeah I agree but do they still have the licenses for those tracks or are they going to be excluded from this version of the games?

^ God knows, we can only hope because that was where the game's personality came from.

I mean... got my hopes up too high. Watching Vice City, you can't climb over walls. This was something introduced in San Andreas and was a huge quality of life improvement.

I'm still going to buy it because nostalgia, but damn. I was hoping this would be a bigger improvement until 6 eventually hits winter 2032.

GTA 3 looks pretty much the same as the original but the cars and characters are polished. I wouldn't even have realised it was the new version if you didn't tell me. The San Andreas world looks fantastic though, it's in a different league to GTA 3 improvement wise...what's that about. Not sure why they said GTA V controls though. Its basically the same apart from a weapon wheel.

Lolll u clearly havent played the them, its a stark difference to game i played on ps2 mate like huge difference

You might want to watch this video if you really think you wouldnt be able to tell the difference between this version and the original release. 🙄 https://youtu.be/K8xphTI_Xe...

Obviously a side by side it'll be easy to see but GTA 3 personally didn't look much of a change. At least compared to SA where its night and day

I'm going to wait and see if someone hacks VR into it, I recently tried RE2 VR and it's great, this week we already got Mafia 2 and 3 VR patches, this is tempting but it would be even cooler to play it in VR.

you do know they announced San Andrea's remastered for oculus quest 2 right?

Just played gta 3 for the last hour and the tracks seem to be intact so far espcially from flashback station my favorite hahaha.

Game looks great for what it is, i was expecting worse, its honestly taking me back to high school days.

The auto aim is still a bit wonky though.

I just need to keep myself from rushing 3 so i can get to vice city, hands down the best gta!

For those wondering how im playing i live in australia, so we generally get games first due to time difference

Vice City is my favourite from this era as well. Love the setting, era, music and style. Can’t be topped!

Should’ve put this on smartphones instead.

If I had to choose only one console, this is a Switch buy for me.
Switch needs a good filler game on that device like this.

The games are fun, hold some nostalgia, and on a smaller screen like the Switch, can condense those visuals to even look better than they actually are.(when in handheld of course)

What would you guys prefer to play this trilogy on?

From what I have seen so far today, it looks pretty good. I like the inclusion of Nintendo specific features such as gyro and touch screen. This shows care and attention to the ports. I am getting more hopeful

Everything in GTA 3 and Vice City now looks like clay models.......

Whoever this idiot is that's playing the game has no idea what they are doing.

How is this ahead of release? You can literally find streamers on YouTube and other platforms that are streaming it. Based in Australia….so rather self explanatory.

Is the original soundtrack in place?

I hate how San Andreas now have unlimited visibility and can see pretty much the whole map from Grove street and why everything look so flat even Mount Chilliad look like a volcano now.

Blah blah blah.. who cares about this game.. tell me when Summer Pockets or A Sky Full of Stars gets a Switch port. Actual good games you know?