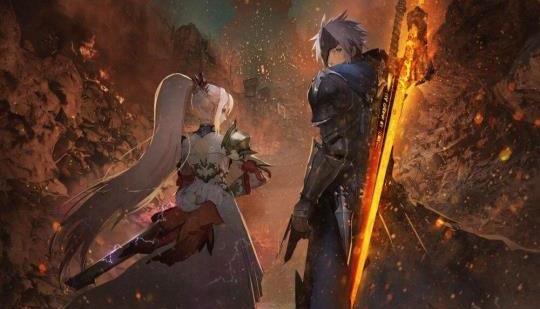 In comparison to its first half, Tales of Arise does not cross the finish line strongly.

Currently just finished all the immediate side quest and beat the temple bosses and have to face the final boss. I have enjoyed the grounded first part of the story. And I’m sure a lot of people can feel satisfied just ending there.

The second part has been a nice expansion to the worlds core mechanics. How things work on a macro level and looking beyond the initial scope that looked to be oppressive for them at the time.

Looking forward to plating this game overall since I got 60 percent of the trophies.

I've never played a Tales game. Would it be ok to start with Arise? Also, how long is each part?

depends , do you like rpg in general ? I'm currently playing the game at hard mode , doing most side quests and exploring dungeons while progressing the story. Im around the end game and i have about 90 hours so . if you rush through the story youll prolly have around 40 hours of gaming . which is pretty good

Yeah I love RPGs. Been playing both JRPGs and western RPGs since the 90s. And I usually try to complete all the side content.

But like I don't need any prior knowledge of the series, right? It's a standalone game?

@porkChop - yes, you'd be completely fine starting with Arise. It's a one off story like most of the other Tales games. It was also a friends first Tales of and he absolutely loved it. Think he also wrapped up his Platinum last week, though, he went and played Diablo 2 for a while hence the delay lol. But if you enjoy JRPGs, yes, do yourself a favor and at least check it out. imo it's not the best Tales of but it's a dam good game that's well worth playing. 2 cents

weirdly for me , Berseria did not connect. From all the tales games I've played over the years its the only title where i felt univested in the story and the characters inside the main party. Very underwhelming compared to Vesperia lets say or even Arise as of most recent.

Thanks for replying to him NatsuX great responses.

I platinumed this game, but the second half of the story left a lot to be desired. I hate emotionally charged games, very unnecessary.

The second half was more interesting but they did little with the conclusion. Nice little ending.

I love the game . To each his own of course

After getting the platinium, I did have some complaints about the pacing of the story. Tales of games have great adventure and discovery elements, but the first part of ToA was too predictable. You know there are 5 regions you'll visit, it was estabilished in the intro, so not much of a surprise element there. They also feel extremely rushed, just breezing through couple maps in each region to fight a boss. I felt like there was a lack of world building there, plenty of missed opportunities to make the story and the world more immersive.

On the other hand, the second part was too focused on the sci-fi part (again, also estabilished in the intro), I felt it's more of a domain for games like Star Ocean than Tales of.

Genereally, plenty of missed opportunities due to writing and pacing. It felt like first they came up with a thesis, and then forcefully tried to write a story around it while adding typical Tales of elements here and there.

Writer's Choice: Our Favorite Games of 2021