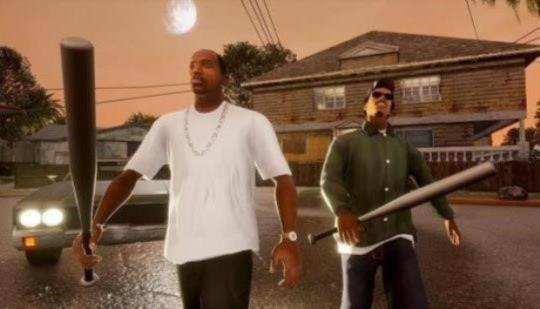 Rockstar has released a slew of pictures and a trailer for GTA: The Trilogy - The Definitive Edition. Here are a few more, including Switch screenshots.

I know they are about to release but even a 5 minute gameplay trailer would be nice. I am more interested in gameplay improvements, quality of life features, mission checkpoints/rebalancing some of the most frustrating missions

Usually with R* games we do get few gameplay trailers so to only get screenshots is kind of underwhelming. Developers have had more than 2 years to remaster so it's not a lazy quick cash remaster from the looks of it and they should show some more

I want physical but I can't wait so I will have to double dip. Buy digital and than buy physical later. That's only if there are some legit improvements not just graphics. I hope skip the mission feature is there if you fail certain number of times like I'm GTA5 this way at least everyone can progress

I can only think of GTA v that featured a gameplay trailer outside of this we normally get a few cinematic trailers filmed in game with the HUD disabled like everything we got in GTA 4 or rdr2 as an example.

Id agree I would like more footage but more importantly I want a solid confirmation on the radio station content. I want to know if they managed to renew the licensing for many cut songs over the years so many songs are now unavailable and they play such a key role in the games feeling that if they are not renewed Id call the physical original games the definitive editions. I got excited and replayed the older games on my ps2 for a few hours and what was a standout to me was all the music that's no longer in the steam versions or the PS4 backwards compatibility version as an example.

Hofstaderman79d ago (Edited 79d ago )

Sadly that's the truth of the matter, due to licensing issues alot of the original tracks had to be scrapped. That's why physical trumps digital. You own your copy of the game in the exact shape and manner it was released. At least that holds true for Ps1 and Ps2 games.

Yeah let's see I am also hoping for more information. Yes these are older games being remastered but nee information on gameplay improvements and quality of life features would be nice

If I'm not wrong with the original trilogy Rockstar had a lot of licensed music where as in GTA 4 and 5 they had a lot of regional soundtrack especially 5. And they have very deep pockets so if they want they can renew most of it but it would be very interesting to see which route they go down

Either way of they do a good job I will buy it. You and many are focused on licensed music I am more focused on gameplay improvements (not saying either is right or wrong just different preferences)

I was surprised San Andreas was dropping, on the 11th for Game Pass. I have never played it. Looking forward to it!

whats the comma for?

No offense but I'm pretty sure it's for your whore mother

But that comma isn't necessary though. "I was surprised San Andreas was dropping, on the 11th for Game Pass. I have never played it. Looking forward to it!" You don't need a comma after dropping

I wanted to get this on switch so I can play portable but since 2 of them are on XGP and PSNow I think I’ll just get Vice City on Switch (if you can buy separately).

The disappointment is real.

Get some Balls. $49 for 3 updated games shouldn't cut too much in to your 'allowance'. "TimmyT"

I'm going to tell my dad that you said this

On Series X, San Andreas "the definitive edition" is included. That is the only one I really wanted to play. I am already playing Forza 5. Stunning game!

If I had the option to only buy vice city I would have done it. I bought all 3 on PlayStation. Evolution 2 is going to sink most of my gaming time.

I’ll get around to forza eventually. It’s a Ms game so I don’t have to worry about it leaving gamepass anytime soon.