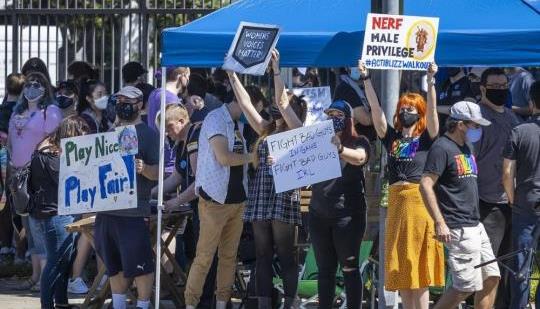 Blizzard Seems To Be Crashing, Burning, And Sinking - And I'm Perfectly Fine With That

By now you can probably write a book about all that happened during the Blizzard lawsuit. And I’m fairly sure most of you know the basic outline of what happened. But on the off chance some of you do not, here is a brief recap.

On July 20, 2021, the California Department of Fair Employment and Housing filed a lawsuit against Blizzard after years of thorough investigation. The investigation revealed a toxic “frat boy” culture in their workplace. A culture that encouraged sexual harassment, and other equally disgusting behaviors towards women.

Since filing the lawsuit, the fallout has been massive. Between key talent being fired, or just leaving. More and more stories of abuse just kept on piling on. The stocks of ActivisionBlizzard also took a hit, and they have been down 15% since July. Many fans chose to boycott Blizzard products, and even protests outside their offices took place.

Definitely. When call of duty comes out and sells like crazy as usual stock will go back to normal.

I just bought some.

Good let them burn. Anytime a Company sells out or caters to China and has employees sexually harrased to the point of suicide, well then it can all burn in hell. Remember when Blizzard was at the forefront of becoming woke. What a sick joke of a company

I stopped liking them when they lost their talent and started pushing aspects of their games that have nothing to do with making them better to play. I don't like the fact the protest was focused on white men as a whole rather then the ones who did the acts. It just makes the whole protest a joke, because it's unreasonable, and the perps get away anyway. Acti just goes "Oh we're going to make half our workforce not white men" but the leadership will not be any different then it was before.

Haha all that money and fame went to their heads. Glad they're crashing.

They will disappear for a year and re-emerge in 2023 with Diablo and over watch. They expect people to forget by then. Are they right? Probably. Going into the shadows for a year is their best move for sure. Anything else like politics, it works. Political junkies forget about this kind of shit in 3 days. Gamers though? We’re a spiteful bunch so maybe not.

I cut blizzard off when they took that guys winnings for saying free Hong Kong. And I don’t even play hearthstone or whatever that game is lmao. It was easy to give up as I never gave a shit about blizzard but I wasn’t an outspoken opponent of them either. I find joy in their misfortune now where I was indifferent before.

Edit: please don’t confuse me for people like that idiot with the “nerf male privilege” sign either. They aren’t any better.