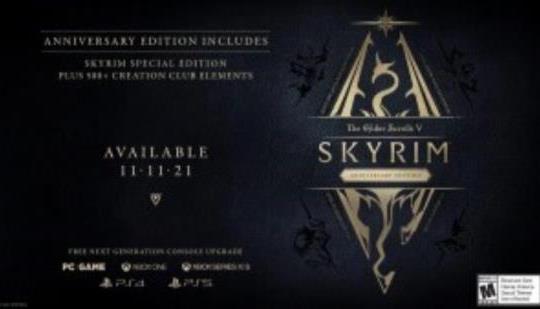 Skyrim: Anniversary Edition has been announced, and so has new content for the base game.

Who's actually buying this?

I can't get excited about flat Skyrim anymore after trying it in VR. It's the only way I'll even play it now.

they say there is a sucker born every min, so probably a lot of ppl

Your both right. I have played it on psvr and it's far superior to the regular game, even with mods. And yeah, just like with GTA, people will rebuy this game again for sure.

I'll be honest, they sold me when they baked in the user mods. I played this game when it first came out on PC up until about 60 hours in when a save glitch prevented my progress(I could not zone in or out of any door, it would freeze).

So I already own the most expensive version of this on PS4 as well, bought it a while ago just on a whim. So, yeah, I wouldn't mind playing it again at some point. Especially with the lack of competition this holiday. User mods being baked in is icing.

Of course, this is all predicated on the new version being good. I'd much rather play this than Fallout 4 or 76, unfortunately.

I will probably buy it. Aside from me this game has been out for 10 years so a entire new group of gamers might enjoy it as well. For me I love this game and don't find myself enjoying many rpgs like I do skyrim.

I've never bought or played it before (more of a Fallout fan) but I plan on eventually getting Skyrim for the Switch.

People who don't own it

Honestly at this point I just wished they remastered Oblivion for a change instead of this every 2 weeks.

I'd be afraid of them changing the charming aspects of the game for being too old or not in line with what Skyrim brought in. Like redoing VAs with different people, changing the way models look but also restricting everything in character creator to do that, or just rewriting quest dialogue for whatever reason. I can remember the Adoring fan, Glarthir, and the grey prince clear as day 15 years later, but in Skyrim I can only remember the guy you click a single option to buy him a drink in Whiterun and he goes, "My favorite drinking buddy" every single time you see him. Plus the other 2 obnoxious NPCs in whiterun that just exist to be obnoxious.

I've been hollering for a Fallout 3 Remastered and it never came either, lol. I have to fire up my PS3 in order to play Fallout 3 but you can play this on damn near everything, lol

Would be nice if the new content came to the existing editions on various consoles.

It's Time Skyrim Pass the Torch, But What Game Will Seize it?

Skyrim: Did it Actually Revolutionise RPG’s?