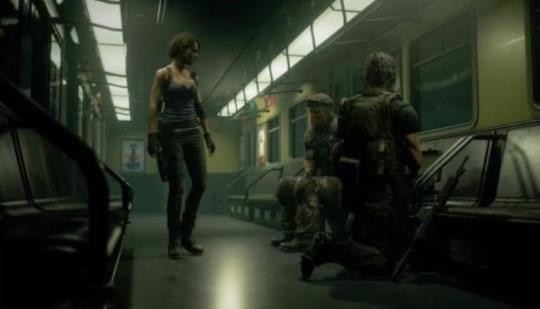 Resident Evil Three Remake has already outsold the original game, according to Capcom reports, attribute success due to digital sales

The only RE remake to do that was the original. Capcom stayed faithful to the original and added new enemies and new areas as a bonus. After 2 and 3 I don't think they are capable of doing that anymore. They cut enemies and areas from both games. 3 got it the worse but 2 didn't get away unscathed either.

I just know they will tone down 4 in some way. I just hope it's closer to the way they handled 2 at least. Capcom seems to have some respect for it. They took their time after all unlike 3.

Both remakes were in development are the same time .. they released them the way they did because that’s how the originals were released. 3 came a year after 2

This one may have gotten away with it based off the success of RE2 remake, but I think the next remake is going to have to deliver a little more to be a huge success.

Their original idea for the Remakes for 2 & 3 was actually very commendable (combine them and sell them together). But yes once the decision was made to separate the two then they definitely should have added way more content to 3

Would think use if "success" would mean just that, sadly.

You'll take whatever they offer, or not. Enough of the other suckers will still buy it.

Ya, success is measured in many ways. If they are measuring financial and sales success I think the game was successful.

But, if they are measuring how it built the brand and the community around RE, I think it was very unsuccessful. To me Capcom has a lot of ying and yang. And they build some really great games and IP like Monster Hunter, Street Fighter, Dragon's Dogma, Devil May Cry, etc. But for every great release they have that raises the bar, they seem to do something that re-lowers the bar at times. RE7 revitalized the IP and brought it more back to its roots. RE2 was a solid remake that I quite enjoyed. RE3 remake was really just taking the RE2 remake engine and reapplying it to RE3. Then Village. Well, let's just say I think they took a few steps backwards. RE7 established a modern identity to RE, RE Village went away from that new identity.

I'd say a big factor was RE:2 Remakes success, but to me RE3:R was just so disappointing.

I really don't want a re4 remake I wish a code Veronica remake first, but if you do it I swear to dragons make a classic.control options or we'll riot.

I bought the remake and loved every min of it.

Yup me too even got the platuim trophy.

How long did it take you to beat it?

Same here, but I do wish there wasn’t cut content. Can you imagine how much better it could’ve been with everything included like the giant worm boss?

Same here. I loved it just as much as 2 and replayed it over.

@Tacobato
For me, playing on normal, without finding collectibles, it took 8+ hours.

Jill was annoying and unattractive and moved/dressed exactly like Claire (with her jacket removed) not to mention they toned the violence waay down and cut the game basically in half...
a success only in capcom eyes if you ask me...

She is attractive, but exactly like Claire, yes. Jill was always more cool and collected, almost stoic. She was also very girly girl, not kind of a tomboy, like Claire…

I loved the game for what it is, not what it was supposed to be, but i agree that Claire and Jill dressed exactly the same by the end of both games. Lol. That’s why I preferred her OG 3 costume.

Jill moves nothing like Claire. If anything she moves a lot faster in RE3. I agree on the violence though lol.

Unpopular opinion among the hardcore fans but I enjoyed it. Was it worth full rrp though no chance I paid $10 for it and finished it within a weekend.

Graphically it was amazing on console and it tookoat of the beats I remember from my time with re3 in the 90s but yeah it missed some areas others were streamlined still it was fun. I would of liked a headshot mode where the game was less about ammo conservation more about pulling off headshots only.

I enjoyed it, I beat it like 5 times too. I’m a few trophies from a plat but convinced myself to play something else. Should revisit on my 5 and finish it out. But if rumors are true about an enhanced edition might give it 4 more gos

It's so hard for me to pick things up again lol

I have one trophy left in Ratchet Rift Apart and I'm just missing one collectable and I know where it is lol but I just don't have the motivation to do it for a trophy.

Good luck man. You can do it ❤

Cutting content from a game and charging full price for the title is a success I was not pleased with RE3 glad it got some love but it's still a half baked cake. If Capcom ever remade Dino Crisis which is my favorite title I would hate to see what they decide to drop from that remake. Out of the two remakes RE2 and RE3 RE2 is the better game I am glad I paid full price for that title day one.

They really did a good job there.

I don't support a gimped remake though and REmake 2 wasn't that amazing as well.
I don't want Capcom to get the wrong message.

I didn't realize they published a remake of the third Resident Evil title. Capcom's releases are just blurring together at this point.

It was pretty disappointing too especially compared to REmake, RE 2 Remake, RE7 and RE8. To be fair though Capcom didn't develop the RE3 Remake so the next one has a chance at being good.

I really hope so! Fingers crossed!

Wow, as someone who bought it at launch and played the original through over a dozen times this upsets me...

Are they also going to present themselves with an award?

If they say so.

It sold less than half of what RE2make sold, in the same timeframe, so i guess based on their shoestring budget for the game yeah it was a success but the game is abhorrent.

I hope Capcom doesn't continue this trend of cut content in their remakes and slapping a full price tag on them. Please don't do this to the RE4 remake

Rainbow Six Extraction Review - Get In, Get Out | Gamespot