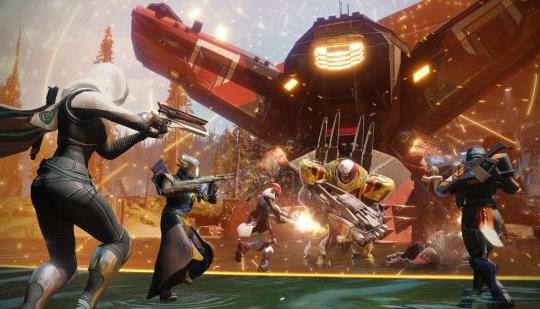 With the emergence of a recent Destiny 2 glitch, Bungie has now started suspending and banning players that are exploiting the game with it.

Adhttps://www.releases.com/?utm_source=n4g&utm_medium=native&utm_campaign=c1
- Comments (18)+ Comments (18)
TopNewestOldest
The story is too old to be commented.

Funny, I banned Destiny 2 for being a boring, repetitive grind fest with more cash grab mechanics than new content.

I dodged a bullet by not buying it.

If you have game pass is easy a good game to play. Idk about buying it

I play the game but I have to give it to you on that one, solid burn.

To be fair, if it's a glitch. You know damn well it's a possibility getting banned for it. Trash game but they decided to risk it. They also deserve to get banned from that game so they can play something worth playing lol

You should not get banned from an exploit that is the developers fault.

So Bungie is NOW banning people for something they've known for a long time as it is? You can keep this garbage of a game and glad I stopped after Dark Below from the first game.

I always love the outrage over something Bungie does from people who say they haven't even played the game for ages. LOL! People mad at the dev for putting a stop to something that people are exploiting in game to get an advantage in a competitive mode and ruin other peoples experience. I thought that was something we praised developers for not chastised them but I forgot the world is insane right now. I get it everyone loves to hate Bungie so much so that they are ok playing against teams in pvp with infinite supers apparently, smdh.

Praise is when the glitch/exploit is caught, acknowledged, and/or taken care of soon as possible. Bungie knew about this for a long time and did nothing until people whined and complained about it - which is where the hate comes in.

"This isn’t new information for the company either, it seems, as Bungie has been aware of the glitch for a few months. " (Verbatim from the article)

This isn't hating on Bungie just to hate on them, this is an issue they were aware of and did nothing about it until recently.

"I always love the outrage over something Bungie does from people who say they haven't even played the game for ages." or.... call it boring and repetitive, but play games like call of duty (or any other basic b*^ch game) where all you basically do is shoot shit with a paper thin ass story. Pretty much bandwagon haters with a severe case of ADD

"Praise is when the glitch/exploit is caught, acknowledged, and/or taken care of soon as possible."

Its easy for all of us to play arm chair developer but some times these things take time to fix and again it wasn't a wide spread issue until recently also (verbatim from the article).

It's easy to be an armchair developer these days

I'm willing to bet most of you people calling Destiny garbage don't even play the game or haven't played it in years. Destiny is the most successful live service game in console and that's for a reason. I'm not saying the game doesn't have it's problems or boring moments but name a game that doesn't.

I fired it up a few months ago, immediately got sent on a fetch quest. Game is just a mess, they keep you doing busy work so you don't realize you're not actually accomplishing anything. Destiny 1 was somehow much better. Destiny 1 also had the choice of difficulty in the campaign missions, D2 campaign was easier than easy, designed to rush the campaign to get to the the grind, what a waste. I just feel the whole game is watered down and caters to people that just want to put in the time and watch their number go up. Skill trees are fairly pointless as all classes play quite similar except the super. Just a very casual game, which IMO is not garbage, but a big waste of potential to what Destiny could have been.

I have been playing it for years, the game play is solid but, It is becoming quite stagnant, It doesn't help that they "vaulted" parts of the game that I paid for, I didn't get the game for free, I expect to play what I paid for, and what is left is repetition and mindless grinding. And add to the top of that all the new "mechanics" in the game (micro transactions and cutting out dungeons as an extra purchase unless you buy the deluxe editions is just disingenuous and wrong....and don't get me started about the new "synthweave" grind (unless you want to pay).

You sound like someone who has played the game a good amount of time and I agree with most of what u said. My issue is with people who haven't played in years or at all.

Destiny 2's Story So Far (Until The Witch Queen)