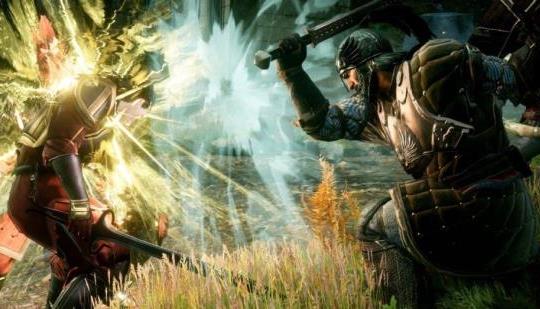 Delving into a well-loved game or series years after its release, when it already has an enthusiastic and devoted fanbase, can be incredibly difficult. People can be casually mean on the internet without intending to, and that happens a lot when you say you don’t like something they do. Fans of the franchise take their love of the game very seriously. They’re fervent and devoted, which has its charms, but it can also feel like you’re disappointing them when you decide their thing is not your thing.

Why'd you play DA2 if you thought 1 was boring?

Because of the reviews, I thought they could do better specially gameplay wise and the third one was even worst

I've never been able to complete a Dragon Age game. They always felt too rigid in design. I eventually think "why am I playing this over Witcher 3?" or pretty much any other rpg.

Idk, because maybe you completed the witcher 3? Not all of us like repeating a game over and over just because its the best in genre.

@arkard
Never found the story or lore of DA interesting. Inquisition was just generic evil dude with demon army wants to conquer world and you're the chosen one.

@jeromeface
I've played through Witcher 3 once, at the same time I was playing DA Inquisition. Hence the example. I never finished Inquisition and went on to complete Witcher 3.

Well the first bored me but I loved 2 and 3. I could never get into The Witcher or Elder Scrolls but I enjoyed those as far as medieval themed RPG's go.

I played inquisition and thought the story was pretty well done. Voice acting as well.

Lost interest when i found an ultimate weapon that could only be wieldable postgame. Like wtf would they let me even obtain it for?

Is it really a cult following if it's in the millions?

lol Definitely a fair point. When a game is made and published by one of the largest video game companies on Earth, has at least 12 million sales between DA:O/DA2/DA:I, DA:I noted as being BioWare's most successful launch, and made EA enough money to greenlight a 3rd game? I'm thinking it's tough to argue that's niche :-p

If you take cult following on the face of it - a group of people who are highly dedicated & passionate about something - the author wouldn't be wrong. But they have to know that term is most widely associated with the group being small/the object being obscure, so it can't really apply here.

Yeah, in what universe is a series with three games, a fourth on the way that's sold millions and is published by EA a "cult favorite"? Next you'll be telling me The Witcher 3 is a plucky and underrated indie.

Cult favorite? It’s well known and sold fairly well and they are making a fourth game . I don’t see it anywhere near cult favorite status . I really enjoyed the first game and the third was pretty good (with failed mmo faults you could notice) but the second game was lazily made garbage .

Second was the best game which is the biggest hot take I've ever had, lol

Loved the first one, second was pretty good. Couldn't even get through the third one. Don't have high hopes for 4, but hey, nowhere to go but up hopefully.

DA: Origins was cool, but I got Mass Effect 2 at the same time and goddayum there was no comparison imo.

I tried Dragon Age out I played for 2hrs I couldn't get into it myself other people seem to like it and enjoy it good for them. I even tried out Elder Scrolls and the Witcher I just couldn't get into them I think the only Western RPG I could get into was ME. All my other RPG's are JRPG's I have no issue getting to into that type of RPG.

2 hours doesn't even get you through the origin story... what a weak take.

Weak take usually a person can tell if they can get into the game or not by the feel of the game is pulling out the vibe was not there for me and Dragon Age. You may like it I don't have to so go back to your trihard skills in GTA or go back to Fortnite.

while its true that some hardcore fans suck, but most of them are actually nice and help you out if you tell them that its your first time playing it.