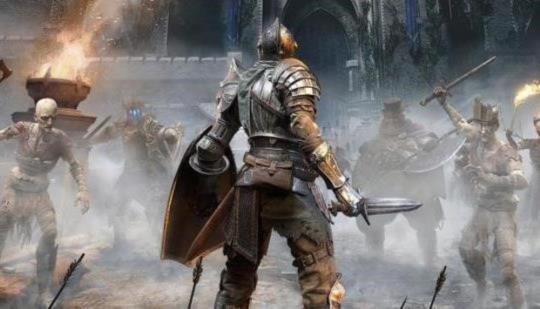 PlayStation Officially Acquires Bluepoint Games, Next Game Planned to Be an Original, Not a Remake

From IGN: "Sony Interactive Entertainment has announced yet another studio acquisition - Bluepoint Games, the developers of the Shadow of the Colossus remake on PS4, and, most recently, the PS5 remake of Demon's Souls.

Bluepoint and PlayStation have worked closely together for years, but the news comes after the studio's latest successful release, as Sony confirmed Demon's Souls has sold more than 1.4 million copies since release. IGN spoke with PlayStation Studios Head Hermen Hulst and Bluepoint President Marco Thrush to learn more about the acquisition, PlayStation's overall studio strategy, and about how, thoughBluepoint is steeped in PlayStation remaster and remake expertise, it wants to explore original ideas."

Adhttps://www.youtube.com/watch?v=EjfojxXOobE&t=463s
- Comments (109)+ Comments (109)
TopNewestOldest
Expand all
The story is too old to be commented.
119d ago

I bet it gets released before ES6...

Insomniac is gonna release 10 more games before they have a release date for TES6 lmao.

Same here. I didn't care for getting my thume on.

That is not surprising with Bethesda shipping Starfield in 2022.

I know Bethesda has multiple teams, but to top ES5 Skyrim they have to do something massive. I don't expect ES6 until at least 2024.

It wouldn't take much to top ES5, the modders are the ones that put in the work. They could remaster Marrowind and it would be infinitely better than the RIM.

A great acquisition welcome to the family it took long enough

I think it is an interesting move.

Time will tell. But I applaud Sony for taking risks. One of the reasons why I like them

That's going to depend on the game they make and how it reviews. It's always a risk with a new IP. Guerilla Game's took risks with Horizon Zero Dawn and they didn't know it was going to be successful

Excited to see what comes from them.

Wonder who will be taking over all the remakes though, I do think they are a good thing for the industry. There's a lot of amazing games that could use just a tad bit of attention to bring them to a whole new level like Bloodborne for example.

This is exactly why i didnt want sony to aquire because no orginal games, but seeing that exactly what they're working on Im thinking sony likes whatever idea theyre working on

This is amazing news!

Really nice. Another great studio that already had a strong connection with Sony.

Great news for PlayStation gamers. Bluepoint and Sony have a great working relationship and they have done some great work. Excited to see what their original new IP will be.

Glad they picked them up. Hope they do a couple more remasters of some classic ps1 games as they work on their own game

Took Sony long enough to make the move would have been stupid if someone else swooped in and made the purchase before Sony.

They’d have to be willing to sell to them . I wouldn’t be surprised if MS tried to buy them too but theyneed a willing to sell when you aren’t a publicly traded company .

Wouldn't surprise me if others did try to buy them with a bigger offer.
I'm glad they are part of Sony now.

Awesome! That's cool they're making an original game. I wonder what it will be

Most likely an original :)

Hopefully an rpg similar to demon souls. That's what I would want

Wake me up when they spend big money and acquire Square Enix.

I like my playstation first party games to be pure quality, no thanks.

PlayStation isn't going to be buying any publishers.

Why? When they can spend a small fraction and acquire better studios like Insomniac.

Because they have ZERO studios that create massive RPG’s. And if they think they can acquire a small studio and have them start making them they have another thing coming. Square has all the knowledge and know-how (as well as patents) on certain rpgs and their mechanics.

You're saying this right before HFW and GOW drop. Don't forget all the exclusives RPG that are coming to PS.

I wouldn’t want any company to purchase them. That would be dumb of Square Enix.

I bet their idea for an original IP was Sony’s pivotal purchase decision, can’t wait to learn more.

The rumor was that Demons souls was finished long ago and that MGS was not long ago close to completion. But it sounds too good to be true.

We all knew it already hahahah !! Amazing news !

So, only when a company is spending big money (like MS did) is the thriving factor to buy a studio. Ore you can spend a lot less money and buy good studio's who you worked with for a while. I like the last option better, Sony's way is smart.

Or you can do both, and stop acting like one method has to be superior to the other.

One method helps the industry grow. The other method takes away games from the competition.

Can we not celebrate companies buying companies please? Get your heads in the real world.

Yeah why is better support and stability along with higher quality and quantity of resources celebrated? Get real guys!

But no seriously, this is only a good thing, Sony every only offers, the studio can decline if they want to. It's not a hostile takeover, and i'm sure they are excited for the stability this provides

How is Sony buying a small studio that only made PS exclusive remakes bad. Blue point is for the first time able to make their own game.
But I agree with MS buying a well stablished and funded publisher that already making games for Xbox only so that PS wouldn't get those games. That's really bad for gaming.

Guess you didn't realize they have also made remakes that appeared on Xbox....but please, continue to show your bias.

My bias is against monopolies ruining the gaming industry. Huge Bias!
Yea 2 of the games BP worked on came to Xbox 360 but we're never funded by Microsoft. Every other game they have work on since 2006 was funded by Sony.
Sony funding a small studio since it's humble beginnings and then giving them the privilege to be part of the best studios in the industry with all the freedom and funding they require to finally make that new IP. It really doesn't get better than that for any small studio.
MS bought a publisher with multiple studios that didn't need funding and who where already releasing games for Xbox. Simply so those games wouldn't come to PS.
More Sony less MS.

When its good news for gamers its gonna be celebrated. When EA buys a company and fires everyone its not. There's a stark difference. Did someone fuck up and buy an xbox?

That's common sense, they have no place with smart delivery.

Really looking forward to seeing what these guys can do with an original IP. They've nailed everything they've touched for many years now, so they clearly have the talent.

I just wanted them to remaster Bloodborne for PS5. Looking forward to this original though

Sony got a really good one here though.

So this means no MGS remake??

For now I think. That's not to say it isn't happening. Think about it though, now there isn't a huge pressure on it to release asap, they can take their time... like the project deserves.

There goes the theory they were bought just to do remakes.

I would love these guys to revive Resistance for PS5. A brand new game in that franchise would be incredible.

Right, with the rumor of the Killzone collection, I would love some Resistance!

or maybe actual new IP... ever think the remaster guys might not wanna be IP restricted for even just 1 project?

I'll be looking forward to their original game!

Roguelite platformer Vagante is out today on Xbox, PlayStation and Switch