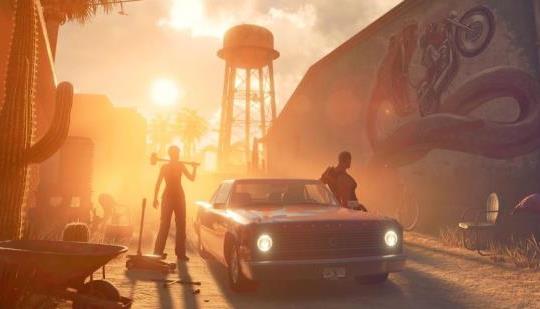 Oleg and Kinzie will be missed, but it's a good thing that Gat and his rag-tag team of gangsters are being swapped out.

Ditching Johnny Gat yup well thanks I will just skip the reboot now. Johnny Gat is one of my favorite characters in the whole franchise next to Shaundi.

It's less Gat being gone and more like people know whoever they add will never compare.

Ditching Gat, Pearce and the others for these generic looking guys was a bad move. They could have just rebooted after Gat made a deal with the Devil

Strongly disagree. The Tomb Raider survivor trilogy is proof of how reboots can be done while staying true to the franchise.

I think it's pretty obvious why they ditched Johnny Gat, because he's white. Where's the white person in the new crew? The only one in the trailer was the rival crew leader getting killed.

Dude Johnny Gat was Asian and the guy that is on the dirt bike in the new game is a white guy named Kevin. What are you smoking if you think Gat is white?

IDK WHY YOU GOT DOWNVOTED GAT IS ASIAN AS HELL 🤣🤣🤣

Sure, that's why they made that half-naked uwu helmet wearing smoothie drinking Kevin look similar to Johnny, right?

It's ok to create a new crew (only Johnny Gat and Playa were present in Saints Row 2 from original Saints Row, yet new gang was still great and memorable), but they need to be interesting/relatable. But what do we see here?
Why Kevin is half-naked? «Kevin is shirtless, i don't know why». And he also wants to be a TV chef, i guess that's why he decided to become a Saint. At least he has a gun (but didn't use it once).
Why Mina look like that? Because she looks almost identical to the Lead UI Artist Kalynn Ogle. And it looks like she doesn't use guns, at least in that heavy situation (when they were almost killed in the trailer), she didn't have a gun.
Eli is just a smart guy wearing a suit. It looks like he's afraid of confrontation and don't use guns.

So only person who's not afraid of using a gun is the Boss/Playa. I can't see then as a group of gangsters, at all. Personally, i think the worst crime they ever committed is wrong parking.

Also, quote by Ray Hazlip (Project Manager @ Volition) - «100% they're relatable». But they're not. Maybe in some small area, sure. But to the rest of the world they look like Silicon Valley tech startup CEO ("Boss"), CTO (Eli), HR (Mina) and barista (Kevin).

You can check for yourself trailers from older games and trailer for this reboot. Comparsion is not in reboot's favor.

Am willing to give this game a chance. But having the likes of Johnny Gat not included is like God of war without Kratos. Little big planet without sackboy or Hitman without Agent 47.

Agreed. People will always complain but it’s definitely the right move. You gotta move in at some point. They took it as far as they could take it and now they’re doing the right thing by starting over.

Agree 0Disagree 0
▼✖-+
SPAMInappropriate
Show all comments (12)
The story is too old to be commented.
50°

Review: Uncharted Legacy of Thieves Collection Revs Things Up on the PS5 - Siliconera