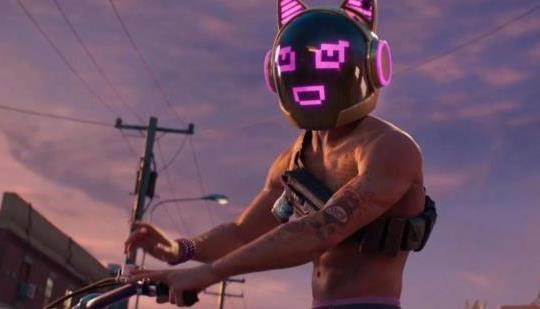 Saints Row Taking a New Approach is a Double-Edged Sword

Deep Silver Volition's forthcoming Saints Row reboot is going back to the series' roots, but this tonal reset may have its share of drawbacks.

I hope they at least still have character customization and a choice of gender like the last games.

They do, but due to poor communication on Volition's part it has been a muddy lake of info.

Here’s what the game’s official press release says:
“Create the Boss of your dreams, with the most extensive character customization suite ever seen in the series, then complete the look with incredible options for weapons and vehicles.”

Yep... I don't get the reboot craze. There must be an artistic void and lack of creativity in modern gaming. Sad.

I don't care whether it is a reboot or new IP. I just look for great games.

It's a sign of the mediums slowing down of creative thought and idolizing former work. It's a bad omen. If all we do is look back and idolize the things that came before how will we create new forms of gameplay and places to see and experience in games?

Its not unlike music... When people say, "X band is the best that ever was and no one will ever be better" it's like saying theres nothing new to offer... I don't subscribe to that.

As a fan of the series, this reboot feels strange. Almost like they want to make it a little more family friendly but the cast just doesn't mesh with the concept of building a gang through murder and other crime. They look out of place. It just feels really off overall...

I'm kind of liking the idea of not playing the usual people who do murder and crime and seeing people not normally up for it stumble their way through it. I actually have a ton of games I can play already that have criminals doing crime real well. I'm not saying more of the same can't be good, but I'd like to give something not the same a chance to be good if it's also something different and entertaining.

That’s fair but that’s why people are saying don’t use the SR franchise if they want to make a game like this which from this trailer doesn’t feel like SR at all.

"If Saints Row similarly wants to grow up, shedding some of its crasser qualities in the process, that’s an admirable endeavor. But juvenile charm is still charm, and it must be replaced by something equally compelling."

Always a hidden subtext in a lot of these articles. Author is implicitly condemning the "crassness" of SR's well known themes and humour. I do wonder if that's what he really thinks or is he putting on a mask in public?

Why so sensitive? People can like stupid things while admitting they are stupid. Like giant dong sliders and weapons. It’s crass, but it’s also fine. It’s perfectly explained in his opinion.

It's part of the original appeal.

The negativity to this reboot is very similar to DmC's reboot reveal about a decade ago. Some brands have a very strong identity and attachment. Completely altering it will of course elicit strong reaction. This is a natural response.

I don't think the author is implicitly saying that the crass humour is fine. He is obviously trying to say that it belonged to an era that is 'no longer acceptable.' Seeing how this has been a running theme in videogame journalism for a number of years now, I think my interpretation isn't far from the truth.

“It's part of the original appeal”

But that’s exactly what the article is about…

Why would he say it’s a double edged sword if the change was inherently good and he thought it was great? He seems to know that the original is crass and juvenile, “but it’s still a charm”, while this one seems charmless. And he is right.

It doesn't contradict what either of us are saying. That's why I asked in my original comment if that's what he really thinks or if it's just a public mask.

Author: "But juvenile charm is still charm, and it must be replaced by something equally compelling."

You: "Author is implicitly condemning the "crassness" of SR's well known themes and humour."

I think you might want to reread what was written there. They're not negative towards it, just identifying for what it is. And they say that removing it, as it appears the developers are doing (not the author of this article), needs to be replaced with something else equally compelling.

I understand that point. But when reading this, I felt an implicit bias for being done with that sort of humour (even if the author did in fact enjoy it).

The author is expressing admiration for Saint's Row "growing up." Considering these new characters, their design, their personalities, all seem to be "youth" targeted than what we've seen in previous entries, this makes me think that "growing up" wasn't used literally here.

Preferring less crass humor isn't a condemnation of it. Much like you, the author can have an opinion. But, part of their opinion wasn't to label one as better than the other, just that they liked that it was approaching humor they likely would prefer. To call that implicit condemnation is you reading into it based on your own implicit bias, not them saying it or meaning it.

Again, they say that the change in tone needs to be equally compelling, which by your own concept of "implicit condemning" being read into it must also mean they consider what they are condemning to be compelling as well? That doesn't make sense. Your logic just doesn't follow through if you take all their words into consideration rather than just the line about "growing up."

From that quote just make a new franchise instead of diluting an established brand name.

not a proper Saints Row imo. Should have brought Julius back and have him head up a new gang back in Stillwater or someplace else. These four members are more kid like than actual Saints material. Blown opportunity which seems to be the trend nowadays with many devs and franchise reboots or sequels.

The trailer still feels like a Fortnite add on like SR joins the Fortnite roster I would have liked to have seen at least Shaundi in the trailer. Only time will tell if it's a day one purchase or if it is wait until it hits the bargain bin. I didn't like the aliens, I didn't like the Matrix feeling type atmosphere with super powers SR3 was ok the purple dildo bat was worth a laugh. SR is willing to do shit that GTA won't do and when SR does it it's actually pretty funny the whole play as a male or female for a while achievement/trophy was interesting.

IV was my favorite... I liked how insane it was. This looks okay. Waiting for the gameplay trailers.

This reboot looks like a huge stepbackwards. It's not even Saints Row, it's wannabe Watchdogs 2 with annoying zoomer characters. Where's professor Genki, a purple D1LDO, OR Johnny Gat?

Yeah I think you nailed it.

All of those things exist already. But, they're also out in space. I'd rather play new things than redo what I've already done in 4 other Saints Row games.

Yeah honestly where the fuck is Professor Genki

I think it looks great. Looking forward to it. Expecting awesomeness. I really loved how they made Agents of Mayhem feel like it was a part of the SR universe while also being its own thing. I mention it in relation to the growth of the games and I loved it.

I think we're gonna see the best game the team has put out so far and it'll probably have some things people don't like. I bet overall it's gonna be epic and really good.

Tha was a sad day... saints row got woke
RIP

Why not just call it something else?

So they can get people to buy it thinking they will get a saints row experience. Bait and switch. Really curious to the character creator and how much they change it.

If they're not going to make a sequel to Saints Row, why not reboot the franchise? If you don't like the reboot, why not just play the other games that exist? Why does this have to have a different title just to appease people who prefer the older characters?

Not liking what I'm seeing. I don't think this was the reboot people were hoping for.

Idk. I get everyone is upset with the change, but the whole, "shouldnt have been called saints row" angle confuses me. Its like naming your kid after yourself and being upset they dont act like you.

Lol at all the salty comments who thinks the world revolves around them.

Dont like the new style, who is forcing you to buy/play it?

This game looks like a SJW parade on an overdose of oestrogen. I can't wait to not play it.

Agree 0Disagree 1
▼✖-+
SPAMInappropriate
Show all comments (43)
The story is too old to be commented.
50°