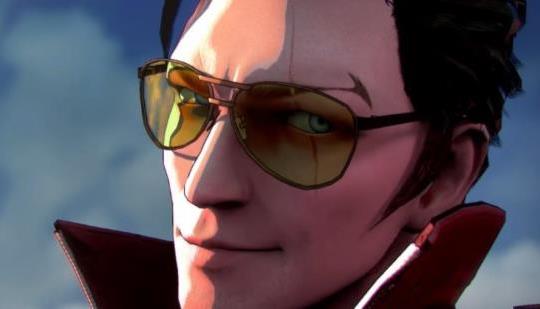 Half-Glass Gaming: "Travis Touchdown is awesome, and he’s a huge reason No More Heroes is so great. That said, series creator and director Suda51 said he would be open to making a spinoff starring fan-favorite Shinobu. And though the series’ fate isn’t entirely up to Suda [as he doesn't own the IP], a sans-Travis entry could definitely work."

I totally get the sentiment, and I agree to a certain degree that these character action games feel a certain type of special because they focus on a single character most of the time. That said, given NMH's lore and other rad characters like Shinobu and Bad Girl, I'd say that universe could definitely be explored from a different character's perspective and still be super badass.

Many of those other characters & themes revolve around Travis though. Suda even stated the unique setting of NMH is based on Travis. He as a character is too ingrained in the very essence of this series to ever be removed. Suda also stated Travis is his favorite character.

I could see other characters being made playable like in NMH2 and NMH TSA alongside Travis similar to how other playable characters along with Dante have been introduced since DMC1. However not featuring Travis at all doesn’t seem feasible.

In addition one must also consider that NMH as a series has niche sales as if is. Removing the most recognizable face of the franchise wouldn’t work well commercially.

Travis is definitely integral to NMH. I think if a spin-off were made where he's not the playable character, it would still work if he's an important NPC or a core part of the story.

Suda also said he'd be down to make a game where Shinobu is the main character, and she's super popular among the NMH fan base. So while the series is pretty niche, that niche audience has an appreciation for a lot of the characters (especially Shinobu).

So while I don't necessarily disagree with most of your points, I think in terms of a spin-off or a Shinobu-centric game, it could def work.

2023 Game Anniversaries To Keep Note Of

Amazon Slashes Up To 73% Off On Select Games

Amazon Slashes Up To 75% Off On Several Action Adventure, RPG, Shooter & Simulation Games

PlayStation Store Kicks Off End Of Year Deals Sale: Over 800 Games On Sale

“Codename: Wandering Sword” is dropping its time-limited demo via Steam on February 6th, 2023