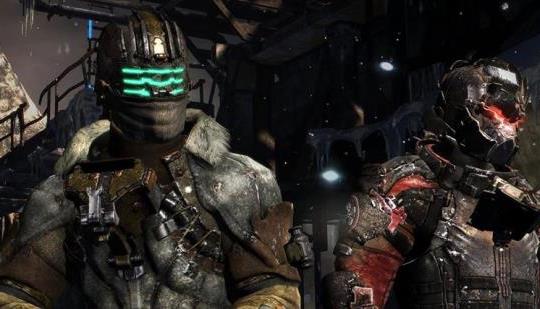 Dead Space 3's hallucinations were one of its most interesting ideas, so it would do EA Motive well to include them in the Dead Space reboot.

The author doesn't say the remake should add coop just Issac shoot some enemy but turns out it's not there.

PS. The author seems to confuse about DS3 Story. He says Issac gets Hallucinations while Carver sees nothing.

I didn’t play number 3 so it’s news to me but yes he absolutely says that Isaac has hallucinations and carver doesn’t have them and you would have to explain this over the mic to whoever you were playing with.

He sounds pretty convinced. Are you saying this doesn’t happen? It’s an awesome idea either way.

It's opposite.
In the Coop mode, There is a side mission that Carver (Your Partner) has hallucinations while Issac (You) sees nothing.

It's a good experience that peoples say should happen in the whole coop mode.

The smart thing to do is a little of the best of all 3 games so it can be established earlier and have better continuity. That way with the sequels newer things can be added and it doesn't just be a 1 to 1 remake

I thought the whole reason Isaac didn't see these hallucinations that strongly yet in DS1 is because he's not been exposed that long. Adding them like in part 3 would go entirely against the lore and story, wouldn't it?

I hope they don't add too much new stuff that changes the game. The game deserves a proper remake, but does not need a reinvention.

It's more and more strongly in a later chapter (saw and interest with Nicole) Which leads to DS2 event.

No. Upgrade the graphics and the audio and do nothing else.

Wouldn't be much of a point if that's all they did.

I agree, it’s already perfection. Adding the stuff that was cut and redoing assets from scratch instead of adding polygons, this is fine.

But don’t remake Willy Wonka with Johnny Depp when it was already done right the first time. Everybody knows gene wilder is the only Willy Wonka, put that shit in 4K and call it a day. Save money on a colossal failure and abomination.

I am on the fence with the remake nothing beats the original and the talented team that created Dead Space. But thanks to EA the original team is gone and the original studio is shut down. I liked Dead Space 3 but not as much as the first 2 and Extraction. The game is a remake from the ground up by a new studio last thing we want is anything from DS3 ported over to the remake. Personally I would like DS2 thrown into the remake pile as well and I would buy both remakes as a double pack day one even breaking my don't buy shit from EA rule because I love Dead Space.

Dead Space Remake Update Graphic Fix Live on PS5; Before and After Comparison