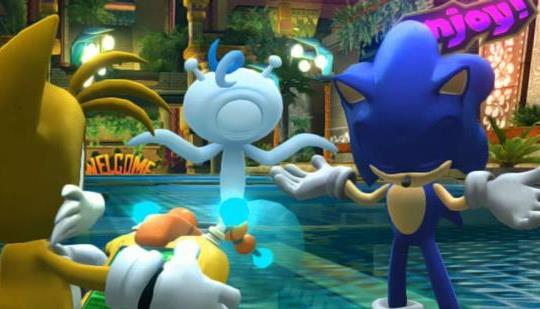 SEGA has shared the latest set of screenshots for Sonic Colors: Ultimate.

Adhttps://n4g.com/General/Sponsored/arise
- Comments (6)+ Comments (6)
TopNewestOldest
The story is too old to be commented.

Personally as a sonic fan. I thought colours was very over rated by fans. Hated that so much of it was side scrolling and that boost only came from wisps. Unleashed on the other hand was amazing with day time stages and praying it's rereleased soon. It definitely has the best boost gameplay designed stages followed by generations which I wouldn't mind a rereleased for either lol

Personally as a Sonic fan I'm completely the opposite.
I think Colors deserved it's praise. I loved that most of it was side scrolling and I loved that boost was a commodity. Big fan of the wisps and what they brought to this game,

Unleashed on the other hands was terrible, with boring night time stages and day time stages they mostly felt like they were just showing off what SEGA could do with the hardware as opposed to making fun levels. A whole lot of memorization was required for the awfully designed later stages, and none of the day time stages were designed with any sort of pacing in mind, no downtime to slow down and do proper platforming and exploration. I completely agree with the negative general consensus this game received, and can absolutely see why it was one of the games SEGA delisted around that time.

I highly doubt Sega will re release Unleashed knowing that it will be critically ravaged, laughed at for being a ridiculously bad video game by the general gaming community, and only really defended by a small (but vocal) niche corner of the fanbase who have recently decided to get behind this bad game, probably due to the nostalgia of playing it when they were younger. Another badly reviewed Sonic game is the last thing Sonic needs following forces.

As for Generations I think that has better boost gameplay than Unleashed, far less focus on memorization, no night time stages, no boring world hubs and no boring medal grinding. I'd definitely take a re release of Generations.

That made no sense. So basically you're saying you're not a fan of boost gameplay because that didn't make any sense.

First when was unleashed delisted? Because it's never been a issue to get or play even now. It's been on PS Now for years. Second. Memorization and learning the best layouts is literally what Sonic's about lol. That's why Unleashed had fantastic daytime stages. The stages pacing was exactly what it was suppose to be, if you play em wrong that's on you. But they're suppose to keep the flow going generally. Boost gameplay is about high speeds and high pacing. Not stoping 40 times a level in a side scroll. Might as well just make a sonic rush 3 then.
Wisps is literally the worse thing that happened to sonic. Games went from skill, trial and error and perfecting execution to, rockets beams and digging. Only time it was fine was Team Sonic Racing and that wasn't that great to begin with lol

First off when was Sonic Unleashed delisted?
https://www.eurogamer.net/a...
you didn't know this? Lol ok. It was delisted to stop harm to the franchise along with other bad games. It was silently put back on the PS and Xbox stores later when the commotion had ended because they knew they would get nostalgia sales. Plus the games were old by then and no one cared.

Secondly memorization has been a part of for sure, but not trial and error memorization the way Unleashed did it. The games were always fair and memorization was rewarded not relied on.

Stage pacing have to disagree, boost gameplay has seen a few games and it's been implemented in them differently so when you say "its all about high speeds and high pacing" I disagree. I think other games have used the boost as either a set piece, a reward, visual eye candy, or a transisiton, and balanced it off with platforming and side scroller segments. Colors does this best in my opinion, Generations does its pretty good to. "Not stopping to do a side scroll" you can speak for yourself on that. I prefer this to whatever "challenge" Unleashed is trying to present.

Wisps is literally one of the best things they added, after years of messing around with silly gameplay styles and characters, they added tools that tack onto the Sonic gameplay and give your creative ways to take different routes, either for exploration for red rings or for shortcuts/speedruns. This works well towards the core tenants of the original games and was a great addition that should definitely be expanded on in the future.

And Team Sonic Racing was fine to begin with lol.

https://en.wikipedia.org/wi...
You can read about it being delisted on it's wiki, or many other places with a quick google search.

The problem with remasters in 2021