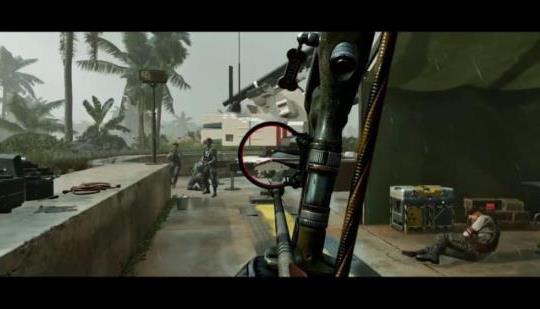 A YouTuber has hit the publish button a bit early, but shows off a lot of what Far Cry 6 has to offer players from location and story moments to custom weapons and sweet rides.

Keeping an eye on this one

Idk if I really want another copy/paste far cry game this time. The last few felt exactly the same except for the spin off ones.

Far Cry 5 was the only game in the series with great side stories/content in an environment that felt less copy/pasted, it was a big step up over 3 & 4 in that regard.

Like they couldn’t afford to make them speak in 3 and 4 😑🤣 just lazy rushed yearly (or near enough) churned.

You ever play the first Far Cry game? I'd take a silent protagonist over that any day of the week. Then again I do think there are some games that are better due to their silent player character. Half Life series for example.

In Far Cry 5, we the player was just a walking gun, cannot even be consider as a character.

Silent protagonist is my biggest pet peeve in video games. It's the stupidest thing ever. Just make the character actually mute as part of the story if you're going to prevent him from interacting with anyone else verbally.

Gordon Freeman is a good example of it. He's barely a character, we just know his name. What makes him interesting is his surroundings and how people interact with him not how he interacts with people. No matter how good Half life is I can't shake the feeling that my character is mute and I'm trapped inside his body.

This looks way more like far cry 2 with better weapon variety.
More grounded realistic world than 3/4 and 5 if ignoring new dawn primal for obvious reasons I was hoping to see a more grounded game overall.

more grounded than fc3? did u not see the jetpack rocket launcher? The CD launcher? The weener dog with no hind legs? a pet alligator? There's nothing grounded about this game revolving gameplay. No similarity to fc2 either.

More cars could breakdown and I though I saw a gun jam in there to. Just getting a more serious vibe over Motorcross chicks and cults

That’s EA Ubisoft and Activision for you 😏😑🤣

Yup and it's sad actually 😁

Absolutely no innovation this is copy and paste with a different setting..

Exactly, and by all the down votes it just shows mostly everyone wants the same crap every year. People are pretty stale and boring. If it was every 2-3 yrs we have a new one I wouldn't be so hard on it, but not every year like a sports game.

Everything they do is never remarkable or amazing (from Ubisoft). It's just a GOOD (up to 8.0 / 10) game, nothing else.

Agreed cannot think with either of the major 3rd party yearly churners actually made a 9/10 game let alone a 10/10. They score 8’s because sure the game is good I’m not saying it’s broken or terrible it’s just boring same sequels every single year or every other have a couple years off make something new and exciting rather than all this copy and paste job every year.

Couldn't disagree more. So many of their recent games have been 10/10 for me.

Looking forward to this, so far so good!

This looks so boring it's not funny.

Why all their games let you pick male and female now? How do you tell a compelling or convincing story if they need make up a generic story that works no matter what gender you are?

If the story isn’t about your gender then how does it make a difference? As long as they have a different actor for each I don’t see the difference.

Exactly!!!!! All of their side missions are now as generic, bland as possible. All the stories are now about ANYONE OTHER THEN ME THE PROTAGONIST. Just compare AC Origin & Odyssey. In Origin, there is a fixed, pre-defined character Bayek. So the writers could write the main story, side missions, all around him; as a man, a father. All those missions felt more personal, more emotional. In Odyssey, the main story & side missions were bland & generic, since the writers needed to accommodate those missions for both male & female. In Far Cry 5, every single main story or side missions are about everybody else. yeah, we controlled a moving gun to shoot everything. But me as the moving gun (i don't even consider the Rookie a character) has no place in the overall story, no emotional attachment to anything in that story.

Agree, I just can't feel connected to the character at all, even in games that don't let you choose gender, this mostly only happens to Ubisoft games, their games always feel like they are missing something, very generic.

All their games are open world that are very similar to each other.

You want sword and scout with eagle? Play AC. You want guns and scout with drone? Then you play watchdog. You want first person instead then your play far cry. And all their games have weak character development and game play, it is all about get to as many question marks as you can, without a good story to motivate players to do anything.

For Honor is unique though, I like that game.

Nailed it. That's exactly what bothered me in AC Oddysey. Story had no focus like Origins.

The issue isn’t gender, it’s just bad writing. A story about a daughter getting revenge for her fathers murder or a son getting revenge for a fathers murder could have nothing to do with the gender of the child, it’s about the murder of the father. You just need a good actor to play each gender and good writing as the foundation. I think it’s great to have more options and it gives women more opportunities to feel represented as well. Sometimes the story is literally about gender and then of course the protagonists gender would matter. But otherwise we just need better writing. AC odyssey literally goes from a random intense 300 flashback to a story about changing your clothes and your uncle not paying people. What a horrible way to introduce the character, nothing to do with gender. Compare that to something like Elder Scrolls Oblivion which opens with the king needing to escape through your prison cell and “the jaws of oblivion” opening. So much cooler, nothing to do with gender. We just need better writing.

@HOLDERofFOOD Agreed!!! It is not the gender. It is the stories that are not written specific for a specific story character that is the issue. Just compare Ubi games with, say Mass Effect (who isn't play the Legendary Edition now!). Even thou we can played as either male or female, both Shepard are a well defined character. All the stories are written anticipating both possibility. So both characters never feel bland.

The issue with Far Cry 5, indeed the Ubi games from the last 5 years, is not the moment-to-moment actions. It the the bland main protagonist used in a story-driven game. All the killing, destruction, etc in the lastest Far Cry, AC, Watch Dog, are all just that, action. In the old Ubi games, the pre-defined main protagonist gave substance, meaning to those same actions.

I'm surprised that people seem to dislike Far Cry 5, I thought it was better than 3 and 4. More interesting world, better side content. It was the only one of those three that didn't turn into a chore to beat by the end.

The issue with 5 was that the Rookie was not even a 2 dimensional character. They are just one dimensional, i.e. a dot, a cursor in the screen.

That was certainly a negative. But I prefer that over having an annoying protagonist, like the one in 3.

Thank you random YouTuber.
And yeah it's just another copy paste.

I can see the 'disabled puppy' mechanic causing a stir....

Are there going to be MTs?

Looks like an Xbox One X game rather than a Series X/PS5 game.

Far Cry 5 was a very good experience to me. Far Cry New Dawn sucked to me. But I cant lie, im going to give Far Cry 6 a shot, but I made a promise to myself that I will not be Pre-Ordering any Ubisoft games from here on out.

I thought visually this game looked rather poor. Gameplay seems a little better then Far Cry 5 though. Might wait for 50% sale. Won’t take long.

FC5 seemed like a cool idea and worthy sequel/continuation but man oh man did that game get neutered. The main story goes stale so they sell you a proper conclusion which also fizzled with its mainstream me-too neon color palate bs and lack of an actual impactful story. Gun play and locations were cool. Too bad the horrid dlc expansions did pave way for true redemption. I had more fun in Primal and FC4.

I hope they really used original assets and locations this time. One more tweak & re-skin edition is going to piss a lot of FC players off.

I bought FC4 and all DLC in a sale about a year ago.

Far Cry 6 Gets a Bit More Maniacal Today with the Launch of Pagan: Control

Xbox Countdown Add-On Sale: Save Up To 70% Off