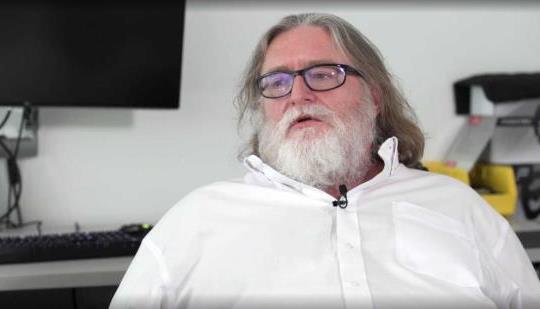 Gabe Newell is hinting that Valve could bring more of their games to consoles. He teased this in a Q&A session held at a public school.

twistedvoxel.com
More Steam games might be coming to consoles according to Valve’s CEOknowtechie.comKnowTechie

Adhttps://store.steampowered.com/app/1488200/Symphony_of_War_The_Nephilim_Saga/?utm_source=n4g&utm_medium=native&utm_campaign=sow_n4g_native&utm_content=png
- Comments (75)+ Comments (75)
TopNewestOldest
Expand all
The story is too old to be commented.

I could see Half-Life Alyx coming to PSVR2.

That would be a welcome addition. It could be played without the VR but probably not as fun of an experience.

I don't think so. At least, not at this time. Sony said "There’s still a lot of development underway for our new VR system, so it won’t be launching in 2021". If Gabe is really talking about a game coming out late in 2021...well PSVR2 wont be a thing yet.

septemberindecember633d ago (Edited 633d ago )

Here is the link to what Sony said: https://www.ign.com/article...

Why do any of you think that they would make Half Life Alyx for PSVR2 and launch it in 2021 if Sony themselves are saying PSVR2 will not come out in 2021?

septemberindecember633d ago (Edited 633d ago )

I did, that's why I said it wouldn't be coming "at this time" and "If Gabe is really talking about a game coming out late in 2021"

I totally agree September. In fact I was going to reply the same thing. (shrug)

Does that mean you also want everyone to reply telling you why they agree?

This is coming from someone who bought OG Xbox over PS2 and who currently owns Xbox one x. My frustration with ms is simple they are on their 4 console and yet to understand what it takes for long-term success in gaming business. They think they want to innovate with gamepass and Xcloud yet the traditional gaming console model is doing just fine if not better than before. Instead of focusing on actual data of what works(great console with a lot of great quality games) they
instead want to compete with Amazon and google

Sure sure keep believing that. Maybe you have missed the past 2+ months of constant bashing of Sony/PlayStation due to their actions/statements

Or did you miss those articles asking Sony to fire Ryan? Or the petition to fire him? Issue with your statement is it's totally inaccurate. 100% false

PlayStation gets a lot more news because it has one of the biggest brand, it sells the a lot of hardware and the most software. so bigger fan base equals to more fans on sites. That's why Xbox doesn't release sales data because unlike the 360 days now it doesn't benefit them(hypocrisy at its finest.

And 2nd point and this is a damn face for Xbox brand: from the last 2+ years of Xbox 360 till 2021 Ms have been playing the wait till next year and wait for E3 card. They were simply unprepared for Xbox one and that is truly shocking since they gave up on 360 more than two years before the release Xbox one to focus on Xbox one games. Where were those games? Bunch of empty promises by Phil who for some reason has made Xbox the weakest brand yet Xbox fans love him. He has been there though the good and the bad and so far his report card is utter failures

So next time you want to know why Sony or even Nintendo fans don't like Xbox one it's not that we don't(I own the Xbox one x) it's the fact that we are 4 generations into Xbox and now they are realizing they need studios and games? And this whole generation those studios will basically set up shop and only start delivering 2024 and beyond. Will Phil get to see the end if and when xbox turn thing around or is it more likely that we will get a new head of Xbox who will come in with different ideas and once again we play the game of wait till next year or next e3

If they agree clearly I get the general gist as to why.

Yeah, that would be you in every one of your posts.

That would be great. I’d buy a psvr2 just for that

And I would buy PSVR2 and get motion sickness for it.

Can you, though? I still see Alyx as Valve's attempt to drive VR sales where they can benefit (PC).

It'll sell a few million copies on PS, I'm sure. But is that really that big of a deal to them?

Maybe they make $100m off of PSVR, while giving their competitor their biggest "exclusive".

I just don't see them doing it.

Except it doesn't sell their HW or store, so why sacrifice those losses?

It's one thing to access Alyx w/o Index, but you're still going through PC/Steam.

What do they gain giving away their only system seller? And why is Sony still doing VR exclusives instead of this kumbaya attitude?

This would be huge! The PSVR sold millions more units than the Valve VR. And I think the PSVR2 can be even more successfull. And Valve bring its fantastic game to Sony console would be a win win strategic, because it will bring more people to the VR world.

I hope it's a new game or something traditional but it's probably going to be Half Life Alyx for the PSVR2...

Either that or another VR game.

I'll take either or both :)

Get a decent PC. S&box will be great and have multiple game modes. It's running source 2 engine and should be more fun than even garry's mod and it comes out this year :)

L4D3 would be great and Portal 3

L4D3 is long overdue. They stopped making it because Source 2 couldn't handle big open worlds at the time.

L4D3 should've been with us in like 2012. The problem with the other games is that once you play them for a few months you can see that they lack a lot of variety and need tons of content to be a truly replayable game. They get very boring quickly.

Back 4 Blood is the spiritual successor to L4D by the same devs. I would look forward to that.

Am looking forward to this. Too bad it's delayed from June to October

I would love to see Portal 3.

Half-Life 3 is a Switch Exclusive. You heard it here first.

Other than HL Alyx what else ?

"coming to consoles" wouldn't be surprised if it's mostly re-releases of games already out, unless they surprise us with a Source 2 port of L4D2 and other games, which would honestly suck. Give new games or nothing.. We've had them forever on PC.

Their coming to solja boys console as 3 year exclusives.

I'd love to eventually see HL:Alyx on PSVR2 and then some new games, but in the immediate term I'd like to see "The Orange Box 2." It Could be all of HL:2, Both Portal Games, and both L4D games. Or I'd love even just an amped up version of L4D2. Now that every co-op game has become a loot-based semi-RPG, L4D2 remains one of the best available co-op games.

Portal on PSVR2 would be awesome.

A console team fortress 2 would be excellent as f2p

Yes and csgo. But I'm not holding my breath.

They did it on the ps3 and 360 with The Orange Box, but that was a pretty poor version of the game, would love to see it on the new consoles.

PC will be the best platform for these games. Gabe does not like console because of the closed environment. But of course he can't say no to money.

People change. So have consoles.

How dare you disrespect Santa Clause!!!

lots of these games would do well on console. and i don't know why they don't crank out more portal games. whats the hold up

WoW, that's interesting! would be nice if they made some games for PC well they are at it... Half-Life: Alyx, was nice and all, but that and crap DOTA games is all they have made in years.

Introducing the hotly anticipated most requested...........Artifact 2

It was so cool when Valve was a game company.

Now they are just the Steam company. Half-Life built your house, Gabe. And you haven't settled the contractor's bill. Not by a long shot.

I don’t see how Steam could go with either of these consoles unless an acquisition takes place. Both of them are in direct competition with Steam. I could see either Sony or Xbox paying a premium to get something like Half-life Alyx on their storefront.

Gabe says a lot of things that never truly come to fruition.........Like the next Half Life. Don't read into anything he says till you see it in the flesh.

It's always SO weird to see your own last name as someone so famous.