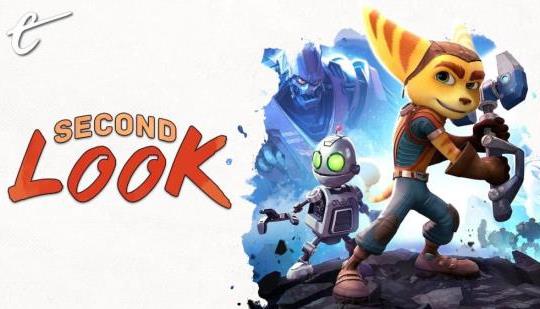 Insomniac Games' Ratchet & Clank on PlayStation 4 (PS4) is an odd duck; it's a remake but not really and too attached to the feature film.

I loved it and it is still so beautiful

I didn't read the article, and never played the original, but the remake is one of my favorite games, not even just on PS4. So if it is such a departure, I am left to assume it was all beneficial at least to me.

I had never played the original RaC until about a month ago. I'm running through every game and spinoff during covid lol. The first one was... WELL,

The ps4 version played SO much better and included all the basic features that every other Ratchet game has, and the weapons were better, menu was better, voice acting was better ...eh I could go on forever but basically the gameplay was top notce but I do think they hurt the story quite a bit - even ruining the canon of the story in a couple instances with their changes and simultaneously changing both character's origin stories. That's just not something you should do to a long running series, but I get it - they had to make a family friendly movie.

The first game on ps2 (or the collection on ps3) is objectively worst from a gameplay standpoint, but the story is much much much better with a ton more content and even planets. But there's no strafing (WHY? SO annoying lol), weapon upgrades, armour, you need to pause the game to pick weapons/gadgets since you only have one page of weapon wheel items, ...god I could go on forever on clunky features. Without being blinded by nostalgia, I think overall if I wanted to play the first Ratchet game in the series I would pick the ps4 game.

I can say that I feel like the movie tie in and making it a new origin story really hurt my enjoyment. I also felt like the platforming from the ps3 entries was vastly superior to PS4 in every way. It was like the thing tried to go back in time but that was a bad mov(i)e.

It was literally marketed as "The game, based on the movie, based on the game" it met that expectation perfectly. I don't think they were trying to go all out with that entry what with Spider-man likely in ptoduction at the time. Still thought it was great personally

So much fun love it. Some gamers are just here to hate and can't accept any changes. It's was $40 bucks and quality remake

Some (most gamers, actually) just can't handle valid criticism of games that they love. If one of their favourite games are ever criticised, it's as if the critic hates video games in general. Maybe you should actually try and listen to the things people are criticising about the game. Ratchet and Clank for PS4 isn't bad because it's new, and we don't dislike it because we can't handle new things, but because it has real problems.

I like how this article comes out like the day after the next game gets a release date announced.

It's just good business. Gotta ride the popularity wave while it's up.

Graphic design are great but the game itself was craptastic. Lackluster,
to short. Clank parts was boring.
wish Insomniac rebooted Going Commando or Up your Arsenal instead of Rift apart.

Yeah sure, keep dismissing a game that hasn't released yet because it doesn't meet your nostalgia needs. 🙄

What you talking about Yoshi???
I was commenting on ps4 ratchet and clank it was lackluster ,short and boring.

Yeah, it completely ruined the personality of the characters. It's like Toy Story if Buzz and Woody became best friends immediately.

The gameplay tapered off towards the end, but it was fine overall. Definitely one of the weaker entries in the series though.

It was my first R&C game and enjoyed it a lot, it looks awesome plays great the weapons are fun new game plus are super addictive and I appreciate Ratchet new design very much.
Very recently I got to play the so called best game in the series according to fans and I get what they're coming from but not when they say RC 2016 is the worst of the series.
Some even get personal with the game it's pretty toxic stuff comparable to some Sonic fans
It was a different time and different objective for the team they didn't thought of it as a remake but more of a reimagine we'll find out soon whether Insomniac lost what made the series special with Rift Apart.

by best game of the series, you mean A Crack in Time, right?

It was my first R&C and I thought it was mediocre, but TheGamingBritShow video made me play the MUCH better original games, too bad this was the introduction to a lot of people

Hmm definetly didnt feel that way when I played it. Cant wait to see what insomniac does with the dualsense. Gonna be as amazing as the game looks i imagine.

I ve just changed the title
"I have just made that clickbait article cause my site needs more traffic"
There you go, fixed.

Good game , not the best but still a good game

I just think they are making it too easy. I want them to focus more on making the gameplay more challenging and rewarding. I want to use the different weapons because I need to, not because I just want to see what it does.

Do you play on hard? Its quite a challange and a lot of fun

Never tried that. I will do that this time.

If anyone hasn't played it, I heavily recommend it! Don't think oh I didn't bother with the others or its not really my thing.. it's brilliant, give it a go!

I've played pretty much all the R&C games and I couldn't tell you what any of the lore is in these games. I buy these games to jump around and blow the s#!t out of anything moving and in that regards it succeeds.

I think many fans disliked the fact they cut so many levels that were in the original.

Hoven, Umbris, Oltanis, Orxon, Gemlik Base and Eudora are among many fan favourites, and they were flat out not in the game. As a big fan of the original, I was waiting for these classic levels to see how they looked in the new graphics engine, only for the game to end without seeing any of them.

This was a $40 dollar remake of the game of the movie. For what i way it was really great. It had lots of ties to the movie which I feel left the game a little light on content compared to other R&C games. However, we are now going to a full new generation with a full supported $70 R&C, this should be a big upgrade compared to 2016, which I and my wife loved.

It's fun and hilarious. Shamefully I'm only getting to play it on PS5 now with the PS Plus collection and loving it. Can't wait for the next one.

Meaning: you are old.

yeah was kinda lame in retrospect

I disagree wholeheartedly. Played the old games, loved them! Played the new game, loved it!

I liked it but would have preferred something completely new

Only problem I have is, I would like the game to be harder. It's too easy.

Also next game should come with 30/60fps option.

it was and still is a great game and looks and plays amazing.

'Ratchet & Clank' – Looking Back at 20 Years of Planet-Hopping Adventures

Ratchet & Clank | How Many Games, Order, and Where to Start