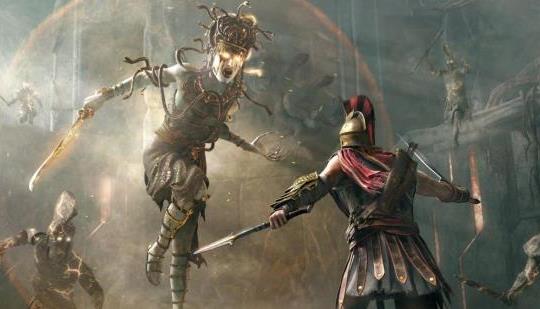 Assassin’s Creed Is The X-Files of Video Games, and It Needs to Stop

Assassin's Creed is going nowhere with its framing of the Animus, Assassins, and Templars, like The X-Files with its alien conspiracy.

It's a game series thay simply does a take on a particular time period.... That's all. I don't see the harm. Skip it if not nterested

And Valhalla has become their best-selling game in the franchise.

That is the basis for Origins, Odyssey and Valhalla. But as somebody who has played the AC series from the beginning, the first and second games setup a very intriguing plot (at least for me) that was derailed with every successive release seemingly because the devs/writers had no idea where to take the story.

Once Origins released, I was fully convinced that they are no longer interested in continuing the overarching plot in the series. Assassin's Creed has essentially become a simple history simulator as opposed to a sci-fi series that actually gave context as to WHY you're visiting specific places and times and what the end goal was.

That being said, I don't think the latest releases are bad or anything. However, they've definitely given up on telling a compelling and interconnected narrative which is what basically got me hooked on the series in the first place, especially considering how bland and repetitive AC1's gameplay was. I don't hate the latest entries but at the same time I've reluctantly (because of my love for AC) concluded that this series is no longer for me, and that's alright but also deeply disappointing personally.

I couldn't agree more with everything you said. I used to love hopping back into the real world and digging into the Modern Day/Sci-Fi aspects. Now I dread that part of it and I really don't even try to follow the "Order" aspects of the game. (Probably why I like Valhalla so much, since ignoring it is kinda how your player wants it)

I have thoroughly enjoyed Valhalla, but it doesn't even get close to scratching the itch the original games gave me. I would like a big time Author/Studio to pick up the threads of the Originals and make it into a Series of Books or TV Shows. It's a huge bummer that the potential of it was wasted when they saw the appeal of an EA like release schedule.

The original story went south when they let Patrice Desilets go after AC Brotherhood. I believe it had been his intention to run with a trilogy and finish in part 3 with Desmond becoming the best modern day assassin and the main character of AC3. Ubisoft had other ideas and padded things out with 2 more Ezio titles and after releasing Patrice it's clear they themselves actually had no real idea of how to finish Desmond's story. Well they finished it.. just poorly imo.

I played a few more titles but after Unity I just gave up on the series because it's like so many other titles out there where the brand and marketing falls in line with expectations but the games themselves are completely different under the hood and its evident the minds behind them have broken away from what the material was originally set up to be. Doesn't always spell disaster when it happens but in a case like this they may as well just rename the series something else since its strayed so far off the core mythology.

And don't forget the grind and xp boosters

Black flag was great and it didn't need Desmond. After that things got ridiculous

Agreed, Black Flag was the last one I played through. Unity was fun too, but they lost their sense of direction after those.

I haven't played an ass crud game since Black Flag. Went out on a high note and I ain't looking back.

Black flag was awful lol. It got fun by origins again once combat changed.

Black Flag and Rogue are among the best open world action games of all time IMO. That's where the series peaked.

Wait until the author finds out Kingdom Hearts is still a thing.

I prefer this random time period stuff. Nobody else is doing a better job of fictional history in video games. I'm all for it. As long as they remain fun I have no issues.

I go in for the self contained stories and experiences, don't really care for the overarching animus crap lol

“Nobody else is doing a better job of fictional history”. Ghost of Tsushima and God of War both say hello.

They teach you God of War in your history class? I'd love to enroll in whatever school you go to. :)

As much as I love God of war...... It has nothing to do with history lmaooo

God of war lmao that's a good chuckle. I'll give you ghost of tsushima, but that's one game. I'm talking about a franchise here, several games spanning several times. Give me a better comparison

I think he means mythology which I also started learning in like middle school history lol. I’ve been a diehard fan ever since.

Ubisoft won't let go of their Assassin's Creed IP, it holds way too much value for them to rename their game series to something else.

As long as these keep selling ubi won't stop. The only reason they stopped making AC games like original series because they started to sell less and less every year. But don't worry ubi will run this into the ground like they do for all their gaming series

its fun ,good looking, and has nice story's ... so you can call it what ever you like , I'll be buying more of it .

Yep, me too I am 155 hours into Valhalla. Love it. Love all of the UBI games, especially the Splinter Cell series.

It stops if u decide not to buy it anymore. Let others who still enjoy it do so.

Its like the Walking Dead of Video Games and just like the TV series it should have stopped a few years ago already.

I pretend the x-files reboot doesn't exist. I love me some classic x-files Mulder and Scully.

Its not, AC has now morphed into an open world fantasy rpg, its clear Ubisoft don't want to make the traditional AC games and are dong this instead but keeping the AC name as new ip's are risky.

Even toward the end Xfiles was and is a far superior piece of entertainment. Content is not locked behind pay walls.

You missed the point of The X-Files

They have hardly had anything related to that for the last 3 games, it's biggest problem is the todo list repetitive, grindy, cut and paste open worlds. Not a knock on the people actually making the games as I'm sure they are all working hard and have a lot of talent but more on management who just seem to want to create the most generic game possible that they can sell to the plebs.

Regardless of feelings about AC series... X-Files does not deserve this abuse.

Also enjoyed the last series of X-files they did :p

its a real shame to be honest.
the creepy lore in the real world made me interested in the series in the first place.
but as it continued on, i really really got sick of it. nothing was ever resolved.

they are obviously good games, but i stopped playing and buying them just before AC3.

Totally agree. All the alien conspiracy stuff bored me in the X-Files and I was a big fan of the show. I've rewatched it a couple of times over the years and always skip those episodes.

As for AC I've only played Odyssey but found the modern day bits boring, baffling (partly my fault for not knowing the prior story I know) and damaging to both immersion and the plot. I was much happier before I found out everything was a simulation. If the lore also meant they were held back from what they could do in the game that's a shame too.

Just don't overthink it. It's a video game. Almost every story in our medium is poorly executed. I can't think of more than a few in the past several years that get story and characters right.

It wasn’t executed poorly though. AC was amazing when it came out. It’s basically a bill cooper conspiracy show written into a video game. Wild new world Illuminati shit lol. But it was done really, really well. My only complaint is that you can’t drag it on like they do. The Templar story needed to end a long time ago. Or at least advanced beyond searching for some artifact.

The first few games were brilliant though. Bringing an authenticity to time periods never seen before really. And on the other side the authentic real world conspiracies from books like The Templars and Assassins by James Wasserman. The time period authenticity could easily be its own brand without the conspiracy and AC should take a break until they can get the conspiracy interesting again. But I disagree it should be removed.

I thoroughly enjoyed the ezio trilogy. Brotherhood was one of my favorite games that gen. Even the MP was super fun.

Those games had a strong lead character and the Sci fi story was cranking on all cylinders. I agree...

The Animus story now is silly. It feels like an afterthought more than a driving force on the game. I have no problem with them reestablishing the animus as something interesting...

Yeah the first AC and brotherhood had the biggest impact on me. AC1 was shock and awe, Brotherhood was mechanics perfected. They started something great but they have milked it conspiracy wise. I think everyone can agree on that.

I haven't played a single AC game, i've always seen it as 3rd party shovelware, mainly because its a Ubisoft game.

Is this guy a moron I mean you’re playing a video game so animus or not your actions will never have consequences!

When do video games become too long?

"I Am Alone" Sale Live On The Ubisoft Store, Up To 80% Off On Select Games