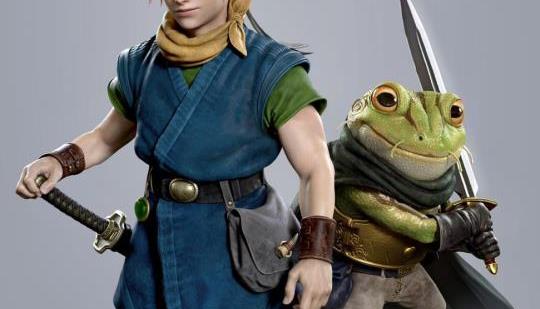 God of War Art Director Raf Grassetti is insanely talented, and he has shared his own version of the Chrono Trigger characters that look beyond amazing.

twistedvoxel.com
- Comments (28)+ Comments (28)
TopNewestOldest
Expand all
The story is too old to be commented.

Wouldn't trust the current Square to do it justice. It is best to leave it alone so it isn't tarnished.

This is spot on

He should do some Legend of Dragoon stuff.

Maybe a cell shaded look could be a good choice, kinda like DBZ Fighters. Chrono looks weird like this

Reminds me of FFVII Remake. I'm ok with it.

Probably because the original artist is Akira Toriyama, the creator of the Dragonball art style lol

atleast someone does something with it, not that Square would do it ha.

Chrono Trigger was such a great game.

Why, no fan remake as per title has ever been allowed apart from Black Mesa/Half life that I'm aware of.

Its not a fan REMAKE. Its "just" fan art.

If you know who the God of War Art Director is, then you immediately know what the article means. There is no clickbait on that.

It is truly bewildering how Square has yet to remake perhaps its greatest title of the SNES era.

This is fantastic! I would love to see this kind of treatment for Chrono Cross as well. :D

Not a fan of Crono’s look (Keep the Toriyama design) but Frog looks spot on.

Loved it! Made me want to play again!

A remake of this in the vein of FF7 remake would be fantastic. This game was such a game changer for its tjme

Please give this to me. I will do weird stuff for this.

To answer a lot of sentiments on why SE doesn't remake certain games or at least remaster them it's because a lot of the same people/same groups that made these games aren't with the company anymore. It's possible they can remake/remaster some of these old school titles but keep in mind that there could also be legal hurdles as well that they can't just jump over. They might be able to release the same game on different platforms like say Chrono Trigger, but it may be difficult to do a remake or remaster for instance unless they get certain people onboard.

Square seems to be saving this game for a rainy day like with what they did with ff7 but hopefully they will be able to release a remake soon.

Would love to see how Legend of Dragoon, Chrono Cross, Parasite Eve or even Xenogears get this artist treatment.