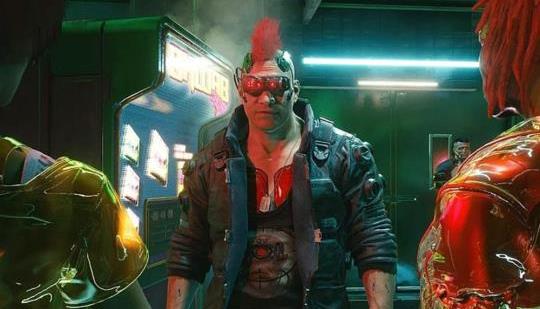 Cyberpunk 2077 is performing great on all platforms with the game performing surprisingly well on the base PS4 and Xbox One as well. according to CD Projekt Red's CEO Adam Kiciński.

Shame the next gen version isnt ready yet, this would be a great game to compare previous gen to next gen.

Guess we'll have to wait a bit longer for the comparisons.

The game should be only current gen exclusive. Last gen support should drop.

Millions of people who still own PS4/X1 still havent made the jump yet and I bet alot of those people are looking forward to this game.

Considering most of this game was made during the last gen phase and is only releasing at the begining of current gen, that's an extremely silly idea

I'm getting this for my base PS4, this is very good news for me, knowing it is performing great on the base PS4 is music to my ears. I will eventually jump to next gen next year. But still very happy to know.

I understand why you feel that way, but it was announced for PS4 and Xbox One and the new consoles arrived later. They can't renege on those versions as it would be unethical and lousy.

Take comfort in the fact that CDPR are going to give the PS5 and XSX versions meaningful upgrades.

"Surprisingly good," to me means that it's good enough to pass, but in reality it's running on minimun specs.

On a separate note - I can't imagine that PS4 fan noise when it tries to boot up Cyberpunk. It'll be worth upgrading to PS5 because of that alone... if you can find a PS5 that is.

I know mate, I was really lucky I manged to get one at GAME, but there was like a 2hr+ online queue. Forget the scaplers as well, don't give in to them, it'll only feed that industry. TBH I couldn't really tell the difference between the PS4 Pro & PS5 gameplay trailer (I know youtube compression is a thing though).

you talk like it will look like stick figures and polygon characters like RDR2 minimu specs on PC. It still looks gorgeous from the footage that has been shown. The fan noise though... It will sound like you're playing at an airport probably

Ooh silly AnnaDea, nothing looks like sex, but sex.

Congrats on your fine purchase. Still using a 1080ti but games are running very nice still. Tried quake 2 rtx version on steam for a laugh and I got about 10fps

Why are you being downvoted?

Because console article and poor people I’m guessing. Won’t lie, 2.5k is the most I’ve ever paid for when it comes to gaming but this rig is mint

Picked up two more Corsair 8gb 3600 vengeance pro RGB ram chips for 32gbs total. Already have a 4k monitor I was using with the PsPro and grabbed a deathadder mouse with Reddragon k552 red backlit keyboard

Nice. Is that a pre-built or did you built it yourself?

It’s a prebuilt. Wanted to build one but lol at getting a 3080 anywhere and I had the extra cash. Basically paid scalper prices for the card or you can look at it as paying for a prebuilt

"It’s a prebuilt. Wanted to build one but lol at getting a 3080 anywhere and I had the extra cash. Basically paid scalper prices for the card or you can look at it as paying for a prebuilt"

No doubt. I've been scouring for a 3080 since it was released without any luck. Probably going to have to wait until next year. Like you, I wanted to play Cyberpunk 2077 with all the bells and whistles. Oh well. My rig has a 2080 super so I'll just forgo the RT. I want to play the game a hell of a lot more than I want to wait for a 3080 to play the game. lol

lol no doubt it’ll still look amazing on a 2070

I wonder if he is actually talking about the "base" Xbox One, or does he mean the Xbox One X. No where in the article is there a true distinction of which Xbox One. Most likely the One X but it caught me off guard for a moment and thought it was the original 2013 model since I've not heard anyone mention that one in ages.

You do realize that the vast majority of Xbox One owners don't own an X, right? Why would they explicitly comment on the performance of the X over the more standard Xbox One models?

Isn't the OG base Xbox One being phased out? Which is why I asked, but just in case it was the One X that was being spoken of it would be odd to have it and the base PS4 refered to as "surprisingly good".

@Abnormal all XB1s are being phased out .

I wondered the same thing. I'm not sure why you are downvoted, but that usually makes no sense anyway!! I have to think that if it runs on a base PS4 fine that an One X should have no problem with it, but a good question none the less.

I blame MS with their console naming decision, which creates uncertainty.

If I remember correctly the OG Xbox One and the Xbox One X will be discontinued, and only the Xbox One S will remain along with the Xbox Series X and Xbox Series S. Not certain about when thats suppose to happen because I don't follow Xbox news closely.

"You do realize that the vast majority of Xbox One owners don't own an X, right?" Wrong, how would I know that, MS stopped reporting sold numbers back at seventeen million if I'm not mistaken. The XOX (tired of writing out the names) came out somewhere in what, 2017, I would think by now there would be more 1X than OG X1. I'd think so because how the 1X was billed at the time as the most powerful system some original buyers would want to upgrade, not just the ones on N4G and other forums.

I am one of the gamers who believes that when a new generation starts, games should be developed for the new platforms, leaving the previous gen behind. I realize that this is not economically possible...devs and publishers would be leaving a whole lot of money on the table with the enormous install bases of the previous gen.....but selfishly I just want to see game design pushed forward more quickly, and having to develop a game with weak for 2013 jaguar processors and substandard gpu's is not doing the developers any favors either....so many compromises have to be made to get the game running on those underwhelming systems. Shame. It will be interesting to see how limited Cyberpunk is....Cd Projekt is incredible, but even they will run into walls/limits, it will be fascinating to see exactly what those are for the game.

I generally agree but Cyberpunk was announced so long ago for current gen and was supposed to release over a year ago so the results of leaving PS4/XBO behind would be especially disastrous from a PR perspective. They showed off the teaser trailer for cyberpunk in 2013 when the next gen consoles were just a glimmer in Sony and Microsoft’s eye. this game was never going to be fully next gen considering it was developed for like 7+ years targeting current hardware, the technical limitations are unavoidable at that point.

Damn Xbox One 2013 will be severally underpowered! The weakest console out of so many consoles current and next gen! Even weaker than Xbox One S that is 1% percent better than the vanilla Xbox One!

And leave out millions of up front sales? Someone dosen't know business.

A developer says their own game runs great...just like when Bethesda said Fallout 76 "just works". Just hope the game has an uncapped framerate mode so i get a ps5 boost.

Alright. My launch xbone is ready! 😵

I think the reason it was delayed due to PS5 releasing. They need to upgrade for render graphics for PS5.

I’m waiting because I have a lot of games to play already and long loading times are hard to go back to now . Call me what you want but that’s what I’m going to do .

If I had been used to no loading times for at least the past year, then I would probably feel the same way as you. But console gaming, for me, has been loading times for more years than I can remember, so I really don't know what I am missing until I get a PS5.

Anyway, that comment was directed at the "5%" of gamers that have moved to the next generation and are calling for Sony not to support the "95%" of gamers still on the PS4. This is the definition of being an !"#%.

If it runs sooo great on base hardware, why haven't they shown any?? I would LOVE to see the xbone try to fight it's way through it, in all its 720p 25fps glory

I honestly believe more can be squeezed out of these systems still. Even after 8 years.