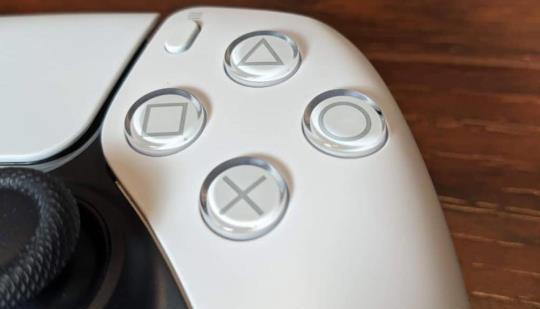 DualSense PS5 Controller Feels Like The Future Of VR Haptics

We've got our very first early impressions of the new DualSense PS5 controller! We haven't tried it with PSVR yet, but the haptic tech is already exciting.

One of Sony’s most impressive innovations for the PlayStation 5 will likely be one of its least talked about features at first: the way the DualSense PS5 Controller feels in your hands. But I think this could be our first real look at what the future of haptics in VR could hold.

this, coupled with the new headphones will take VR to a whole 'nother level.

I’ve heard nothing but huge praise after people getting their hands on with the DualSense. It must be amazing. Can’t wait to try it myself.

Let me put it this way: there are two next-gen consoles releasing next month, but only one next gen controller. The #DualSense is that good. #PlayStation5

Judging by the early feedback it seems Jim Ryan wasn't overstating it when he talked about the next-gen experience of the DualSense on PS5. Hopefully, many developers see what can be achieved in Astro's Playroom and implement support into their own games.

Yeah the headphones are getting good feedback too from a comfort perspective, which is what I needed to hear. As much as I love the sound quality of my Platinums, over extended play sessions they feel like they grip my head a little too much and the band on top gets uncomfortable. From what I've heard, both factors are improved upon with these new ones.

I'd wager they've been developed with PSVR2 in mind, as well, if they have a prototype knocking about in R&D lol

I have only used the headset that came with the PSVR but I have been interested in getting some quality headphones to use with it. The new ones are what I have my eye on lately.

My headphones arriving Friday. I'm still very nervous about how the actual cups actually attach to the headband

Yeah, the band on the Platinums used to hurt my head after about 30 mins of use, but recently I noticed it is no longer an issue. So either the rubber or my skull adjusted somehow...

Persevere and it may improve.

It did in my case, but prior to that they were the most uncomfortable headphones I have ever owned, and I have owned more than 10 pairs.

I'll pick up my extra PS5 controller on pre-order from Gamestop this Friday.

Will there be a VR2 that is the question. New Move controllers with haptic would be interesting.

The only Next-Gen controller

When people are saying things like, "it's like spring appears under the trigger and then when you do something different, it magically disappears" and "I could close my eyes and still tell what surface I was walking on", it's hard to disagree!

Can't wait to try my hands on it. Watching all the unboxing videos and articles and I am over excited right now for my bae PS5.

My instincts are to question the hype always but damn I can’t help but feel the hype. Super hyped, can’t wait to experience this myself

This is the only next gen controller out there, xbox controller is a refinement and there's no such thing as pc controller as they just use the console ones unless you count steam controller 🎮

The adaptive triggers and haptic feedback rumble will literally game change especially in certain types of games Combined with built in audio voice chat and touch pad. Ps5 gamers are in for a treat and tbh only £359 to run something like spiderman miles at 4k is amazing. You can buy a cpu only on pc for £359 that's how much value the Ps5 holds...

i'm more excited about this controller and the potential than I am for the actual console itself.

It seems to be THE talking point right now with all the unboxings. Not saying much about the system... it is what it is but all the praise is about the controller. So you arent alone in that regard.

in a perfect world, we could pair this controller up with the power of the Series X for the ultimate home console experience. but we know thats not gonna happen (although it does work with xcloud).

Lol it's because people aren't allowed to reveal that much about the console itself at this point, nothing more. Should not be that hard to understand that there are embargos in place which dictate when people are able to talk about certain things regarding ps5. At first a few people had to come to sony to see and show the console, then youtubers/ gaming media received it vut could only show the box, now they can show the console and next they will probably be able to share footage of gameplay and the console powered on.

Imaging the hype for the console itself when its controllers already getting THAT much attention.

I still have like 70 PSVR games but i sold my PSVR. The oculus is just SO much better at tracking and both the headset and the controllers are so much better. I even sold my gen 1 PSVR for the gen 2 so i could get HDR support and less cable weight but i had to sell the gen 2 as well. The PSVR just is just really showing its age these days and feels shockingly worse than any other VR headset - most of which can be found for about the same price as a PSVR. Even my old HP Mixed Reality headset with the trackers being in the headset felt 10 times better (and had less screen door effect and drift) than the PSVR.

I really hope Sony releases a PS5 VR headset with better tracking and maybe even using Wifi 6 to make it wireless. I have all these games (I really wanna try Dreams VR!!!) but the headset is just kinda crap once you've seen the other side lol

Comparing a PSVR to a Vive in terms of pure power and tech is like comparing a PS4 to PC.

I think the biggest thing they need to address is the controller/tracking component. I could honestly keep going with the current headset for another year running ps5 games IF they put out better controllers.

But then yeah, wireless would be nice after that.

Nah, i dont have a vive,

The HP Mixed Reality headset i bought years ago for $250 on clearance at Staples has a higher resolution, better fov, and better tracking than the PSVR and it didnt even need external trackers (like the oculus Go). Sony should think about that.
I've since upgraded to an Oculus which i got on Facebook Marketplace for $300 and it is SO much better.

I dunno why im getting so many disagrees lol i've owned all these headsets and spec-wise (literal facts) and experience-wise the PSVR is just... showing its age is all. The thing is over 4 years old lol we've had significate advancements in VR tech that a PSVR2 could include

giveyerheadawobble457d ago (Edited 457d ago )

You don't measure VR HMD's with power, so your argument goes out the window. Only recently have we headsets with standalone processors in them to power games, and as far as my knowledge goes, there's only one on the market. As far as the actual PSVR hardware itself goes, only now have we recently gotten headsets that make it look a bit long in the tooth, but only in certain areas. The main one being resolution, but even then that's not to say PSVR looks awful or unplayable, because it doesn't. The limiting factor is the base PS4 hardware and the light based tracking that's limited to a narrow FOV on the tracking camera. It doesn't matter, though. It all still works and it's still just as immersive. People need to relax when it comes to the PSVR vs PC. The PSVR has done its job. It's gotten VR out the gate and has sold relatively well when there were naysayers all over the place predicting it would crash and burn, and VR itself would follow suit. That hasn't happened, and it continues to sell. We'll eventually get a new headset with new controllers with all the modern perks the more expensive headsets have and then some. And, yes, it will be wireless.

@giveyerheadawobble not necessarily out the window. i should of clarified and my use of the word power miscommunicated the point i was trying to make.

PSVR has an always has been an entry level device vs. Vive which is a high end device in the same way PS4 is entry level vs high end PC's. I agree with all your points that PSVR is great. I'm just making the distinction in reply to another claim that it's inferor in how it performs, which it does in areas but there's a reason for that.

I have been reading nothing but praise for the DS5. I pre-order it.

This controller by itself won't be. Sony will have VR specific controllers with the same kind of haptic tech built into them. Maybe even one large trigger grip your hand wraps around on the handle, giving actual hardness haptic feedback for when you squeeze things.

yep, borrow some things like the Index controllers. Don't get me wrong, I love this new controller and I feel it will do a lot. But for VR a controller just doesn't feel as good as stand alone things for each hand.

my only gripe with this comment is gaming in VR with a controller is not the future for me. Give me stand alone controllers for each hand any day of the week.

Now assuming Sony implements this haptic stuff in the triggers on the newer controllers down the road, then you've got a winner.

Fortunately I have all the disposable income I need because not only do I want a PS5 but so does my son and my daughter.

I'm going all out this christmas. Usually we have to wait for us all to game together but thanks to better choices I have made in the last 2 years and I am at a better place in life and this christmas me and the kids are gaming our butts off. I cant freaking wait.

Didn't think about this, it would be awesome!

Check Out the PS5's New Console Covers and DualSense Colors