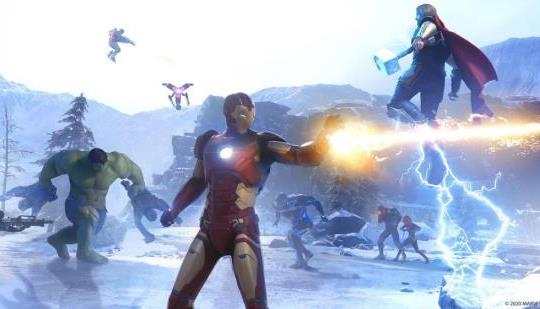 Crystal Dynamics shares the vast improvements of Marvel's Avengers it has achieved with the power of the PlayStation 5 hardware.

Still not sure how i feel about this game and if it will be good or not but if i do get it ill just wait till i have a ps5 and get that version.

To be honest the latest demo showed some promise. It seems it has good elements and some thought went into the gameplay design with particular focus on co-op. Let's see how it'll turn out, for now, I remain cautiously optimistic.

Wow, after i saw this, I almost bought it

That looks so much better than what we were seeing before.

It looks like cinematic fueled basic action combat. You have a heavy attack, a light attack, a few combos, and a timed super attack. It's basic as heck combat, people, being sold with graphics rather than actual worthwhile combat. Instead of a fully fleshed out combat system, you perform the same combos that look different with different characters. It's a mobile game made for console gamers. It's pretty but shallow. And your end goal is to repeat combat over and over for a chance to unlock higher tier gear to do more damage or to unlock skins.

I do not get why people are so easily sold on this game.

No, you should wait until after the game is out.

Yes it is, but it still has basic and repetitive combat mechanics.

No one is rushing out to pre-order this. It's obvious that it's designed to extract as much money as possible from buyers. All I said is that the latest demo was a marked improvement over their last showing which was abysmally bad.

the action looks fun, but I'm guess generic robot story with giant head villain won't be that great. I really wish scarlet whitch was the main character, that would be awesome, love her power more than stretchy arms. I'm still getting it though.

You can upgrade to the PS5 version for free if you buy the PS4 version.

The ps5 not out yet what you mean good use.

I know really wish they would have picked a better character, above I mentioned scarlet witch just to name one. but any other would have been a step up, I'm just not a fan of the Gumby arms.

Maybe Marvel is pushing Ms. Marvel through the game in a way to increase awareness of the character before introducing her into the MCU?

Agreed, seeing her in action she kinda looks to have similar smashing abilities to Hulk, only stretchier if that makes sense.

I agree. She woulda been perfect during the old days where systems needed mascots and such; maybe have a solo game, but to be pushed to the forefront when you have a team of better characters, kinda sucks.
Scarlet Witch would have been awesome. Are there even X-Men in this game?

It basically looks like Destiny/Warframe/Name a grinder but with Avengers, I'm not a massive fan of those types of games but this is definitely a type I'd probably enjoy given the expansive universe to draw from.

Precisely the kind of game I want right now. I hope that my friends will follow me...

Burnt out on Destiny and Warframe?

I liked destiny but quit cause I didn't like the economic model. Warframe never appealed to me. And I'm in a Marvel phase :)

Got Huge doubt about this....

“The PS5’s custom-SSD allowed the game to run really fast even before optimizing it for the next-gen console. After optimization, Crystal Dynamics is happy to announce that the loading scenes are nearly instant, which makes mission hopping seamless. Even hi-res texture loading is too fast.”

This sounds so good. I can’t wait for next gen.

I'll be using the Power of PC gaming. Thanks. LOL

Roguelite platformer Vagante is out today on Xbox, PlayStation and Switch

Sonic & All Stars Racing Transformed - Still Perfect After All These Years