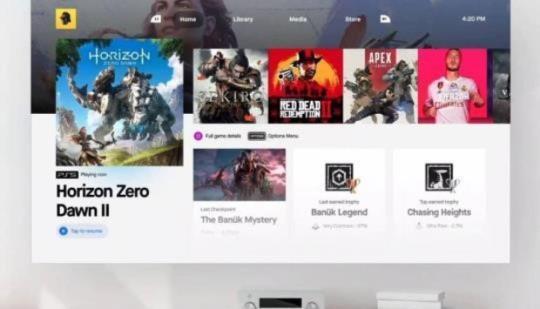 Joshua writes: "I guess we're all excited about the PlayStation 5 launching later this year! I took a stab at what the dashboard could look like based on my personal preference. For this prototype, I was looking at fast rich transitions that are not in the way of the user."

Got to be honest, I don’t really like this concept. Can’t wait to see the official PS5 UI.

Yeah I wouldn't be happy with this for sure

I'm going to need those folders, that's one of the best things Sony has added to the UI, makes it easier to organize my games.

I actually like the simplicity of the PS4 UI.

Same, the PS4 UI is my fav out of the 3. It’s really simple and gets to the point. Plus it looks nice.

It's easy to use but it could do with a bit more personality and much more customization.

I sort of miss the music and the little videos that would play when you hovered over a game on the PS3. If Spider-Man was on the PS3, the main theme would swell every time you hover over the game alongside a video of Spider-Man swinging through New York and beating up gangsters. It gets you hyped to play. On PS4, you just get a thumbnail of a web that looks like something off the app store. 90% of the time the thumbnails look worse than the cover art on the PS Store.

I really hope that we will be able to properly organise our digital libraries on PS5, along with the ability to pin games and folders. A lot of my games that I want to play are buried among games that I have no interest in - PS Plus is both a blessing and a curse.

Vita had a great UI. If they could find a way to get that easily usable on a non touchscreen based system, it'd be awesome. Would need to be refined some of course.

I always wondered why Sony didn't implement the touch pad into the function of the UI itself. Seems they have some basics already programmed in, as PSMove can go through it with similar type motions.

We need to see real stuff, not fake stuff right before the reveal.

Only care about the real deal

XMB was good except that some of the settings options were a little convoluted, but that's true for PS4 as well. As far as organization of games and videos, it was nice.

I haven't liked a interface as much as I liked PSP and PS3 to this day. I still like the videos and music that play when you hover over a game, makes it feel more premium.

Someone made good effort in this concept and took the time to share this with their twitter followers. A lot of the people on this site need to mature and praise more often than portraying negativity. You’ll fall asleep feeling a lot better about yourselves.

If something looks like shit I don't care how much effort was put into it I'm not faking my opinion.

That’s the professional point I’m trying to make, no one asked for an opinion. Sony did not post this video asking what the general consensus was on it so they can determine if this is the direction they should go for the PS5. If people commenting want to showcase displeasure with it, oddly believing that Sony is reading these comments, I can assure you there’s better ways to go about making your thoughts known.

Did away with themes then?

It reminds me of the Windows Game Store. I don't think they would use this trash. But I guess it's a pipedream to keep/use my ps4 purchased themes.

These never, ever end up anywhere near the actual product. What's the point? It's fan art.

Looks ok but needs way more subtle movement on tiles. Will look cool for first 5 minutes and then this heavy pop will become jarring, especially on white background. I've been there as UX designer.

It reminds me a lot like the xbox dashoard to me when the tiles/tabs were horizontal. (now they are vertical)

Not Bad, not good either.

Agree 0Disagree 0
▼✖-+
SPAMInappropriate
Show all comments (30)
The story is too old to be commented.
30°

Dolmen is a sci-fi soulslike worth skipping