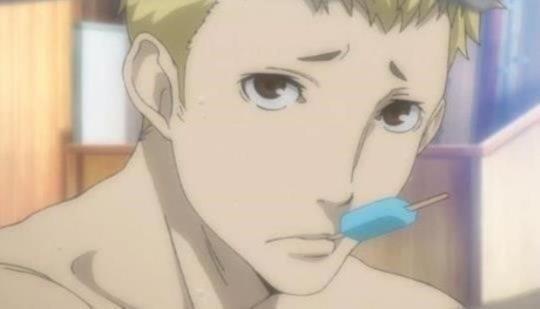 Persona 5: The Royal Will Change Homophobic Scenes For Western Release

Atlus confirmed to IGN that the beach scene, among others, will be updated in Royal after fan backlash.

I guess western gamers are too sensitive.

Good thing too cuz It could cause anxiety on this side of the world, and make people run to their safe spaces.

State of pandering in the world, they'll find something new to to get anxious about soon enough. Meanwhile I'm off running to my angry space forced to do the happy dance. I seriously hope that is all they are "culturally localising" because honestly the implied rape and the aftermath bit would be up for the chopping block and that scene really shocked me initially and is an integral part to one of one of the main character's development.

The boys on ResetEra say 'hi'.

I'm a western gamer. This pandering drives me insane.

It drives all of us insane, why do companies keep folding to these crazy vocal minoirites.

They do it because these whiners are very vocal and create an illusion of being the majority voice. There's the additional problem that anytime anyone argues against the whining minority they are then met with the counter of being ignorant, racist, close-minded, arrogant, homophobic, transphobic, etc... The majority group that isn't causing a problem is forced into submission to stay quiet in order for the minority group to be heard and cause problems.

Could someone describe the homophobic scenes?

The scene involves Ryuji (a minor) being harassed and dragged away by two stereotypical older gay men so they can touch him. The scene is more akin to zany Japanese humor than western situational humor.

The accusation of homophobia comes up because it makes the only openly gay men in the game seem like they are pushing homosexuality aggressively.

Personally I just don't find the scene funny but rather annoying. Atlus USA made the call on the deleted scene.

What Juustery says is pretty right.

I wouldn't call the scene homophobic. More that it portrays a negative stereotype about gay men. If it were straight men doing this scene it wouldn't be considered offensive, at least not to the point of people getting upset, because that kind of lecherous stuff really isn't that uncommon with this style of anime presentation. While I think it's proabably not good to represent things in such a way, it's more archetypal than stereotypical....as in it's an archetype of someone who's lecherous. The Japanese culture has a different view on such things than western culture. Game itself really isn't affected by it, although censorship sucks in general.

Scene is realistic actually, sorry gay men but that's how straight men feel about it. I give off a gay vibe and regularly get drunk men try it on with me and absolutely hate it.

When I read some of the things I read about censorship I do wonder why some people go so far to fight against it. If something as a paedophilic theme I'm fine with that being scratched but I feel some people would be outraged. Too many nonces out here. I'm not for censorship for stupid reasons but certain areas deserve to be cut.

Was that scene in the original P5 or just the Royal as I don't remember the scene?

To those who feel pissed about the changes; get the import .

They weren't homophobic, it was just humor. Tired of the perpetually offended ruining things for the rest of us.

Yeah. I guess I am then because I don't like pedophilia glorified. I understand the depiction of it but there's a fine line and my comment earlier wasn't about this game's censorship which I didn't agree with as I've asked if the same scene was in the original p5 which I had no issues with at all.

Ok so I don't buy the game. I don't really like things like censorship and altering things just because some people complain. Royal has sold horribly in Japan so it's a flop anyway, this isn't helping.

Lol I don't like it either, but It's an irrelevant detail. If you really believe that, never buy something from Capcom or Sony, they censored a five-second scene in DMC 5. Sony also have been doing this kind of thing for some time now.

I mean I still have the OG release and a nice steelbook so this just makes me not in any type of rush to buy royal if at all.

Is this scene in the original or just in royal

The game definitely wasn’t a flop in Japan. It debuted with over two hundred thousand sold and is now over half a million. That’s hardly a flop for sales in Japan alone.

Wow, the nerve! I mean, why is homophobia bad? /s

Everyone here is soooooo edgy

The people here weren't going to buy it to begin with. Let's be honest. It's like me saying I'm going to boycott the next Forza game because there's no Herbie The Love Bug in it.

If western audiences actually boycotted games that censored during localization, then they'd probably never buy any of these games. I don't think there is a single localization where something that would probably never be looked at twice in Japanese culture, is some big thing that will upset the western audience, and has to be changed. All the companies that release Japanese otaku games in the west change or remove something because they don't think it will go over well.

Right? Kinda ironic how people scream about being too sensitive, whilst barely able to contain their own irritation over this change.

Like...so what? Oh no, they changed a homophobic scene...so? Is that so awful? People need to pick their battles better. They wind up sounding more sensitive than those they complain about.

Yes, The biggest “snowflakes” are people who complain about snowflakes.

People just don’t like censorship. Doesn’t matter what it is.

/s = sarcasm I didn't knew that. Sorry millenial, it's really hard for me!

Censorship is bad too you know. Come to think of it so is murder yet no one screeches about that in games.

Do you understand what localisation is? It's not simply translating the game word-for-word, it's about adapting the context for the region the game is being sold in. What may be appropriate over in Japan may not suite the culture over here - hence the subtle changes and adjustments.

I am curious if this is a Sony call or an Atlus call...

Sounds fine by me. Ain't going to stop me from buying

Then you’re part of the problem.

mehhh don't lie, you didn't have a pre

I guess all the flamboyant shows filled with gay men trying give straight guys the queer eye need to be cancelled immediately because of phobias.

You're comment reminded me of south park for some reason

As a none gay man I agree.

I know right. The scene in question was not only very brief but really wasn't that bad.

This is also a reason why I feared persona getting so popular. The easily offended and sjws that for some reason will pick the game up. Ugh, its always these guys that get heard and everyone else that just enjoys the game gets affected because of like .000001% of the people who've played it. Its a japanese game made by jp devs with different views and cultures from us western folk I mean come on. Redicilous time we now live in...

Even the unpopular games have been getting censored for years. Happened even before all this outrage culture got called as such. Same thing went on back in the Working Design days with the Genesis games they released. It's extremely rare to see any localized game, or even anime, that hasn't had something changed or removed completely.

It really does suck that snowflakes have to ruin everything. Persona 5 deals with mature themes and does it well. Can't handle it? Don't buy it. What's worse is that these devs are pandering to these snowflakes.

It's too late. Whats the point of removing it now? Nitwits

It's a scene that's been edited that some people found offensive. I don't even remember that scene so I won't be missing anything. I'll be buying this when discounted,I can't see myself paying $60 to play again with just some new dlc & some minor added adjustments in the game. The game should have a price tag of $30 or no more than $40.

It's only homopohic to non fans

weird. what a time we are living in. it's like we're going backwards now

This is the thing. Folk get representation in these games so they have nothing to moan about right? Wrong! The representation is never right so some folk MUST be outraged no matter what!

They want equal representation until they’re equally bad looking. Then it’s bad and needs to go.

Hate to break it to you folks. This is what equality is. You get treated the same as everyone else. Stereotypes and all.

Not to spoil anything, but the character who gets involved with that gay NPC isn't homophobic at all. I mean, in the vanilla version, he wasn't "scared" of the gay NPC, he just didn't like the thought of being taken advantage of by such a person. I get it though--these days, when you disagree with someone or dislike something, you will be called names and be categorized as having phobia to those things you dislike or disagree with.

Journalists nowadays are stupid and don't know the proper terminology to use. Its a scene which could be said to perpetuate a negative stereotype, but even then, I feel that's stretching it, and I really don't know who was calling for it to be changed. Atlus and NISA have been pretty fervent in trying to avoid controversy that comes from culture clash though, which is why so many games are getting changes.

Complaining about censorship and you want to make homophobic content your hill to stand upon?

Guess they should have ignored those fans and listened to you folks here who only care to mock that people want better by inferring they're weak?

I'm not trying to stand up for censorship in general, it doesn't make sense a lot of the times, but homophobic content in a game aimed at teens seems to be something we can let go when even the fans ask for it.

No! I want the writers ORIGINAL vision, uncensored in all its glory.

Homophobia exists in the world, what this is doing is washing it and pretending it doesn’t exists just so some people don’t get their stupid feelings hurt.

What’s next, get rid of war games because war is ugly and can offend people?

This is what’s wrong in the world today, we’re changing history and science just make a small percentage of the world feel better. This isn’t helping anyone.

Not the best arguments. Child rape exists as well, but we don't put that on screen.

No one is changing history or science by censoring the re-release of a game that already has those parts in them.

I think you're taking your feelings about one thing and applying them with a broad brush to everything here.

You see child rape in tv shows all the time.

Law in order SVU has been doing this for over 20 years.

Well that's just not true. You hear about child rape, but you don't see it.

That’s because explicitly showing that is more severe than making a gay joke.

Plus American tv rating system is a joke, you can show someone getting their head chopped off, but showing a nipple sends everyone over the top rope, same applies to game ratings.