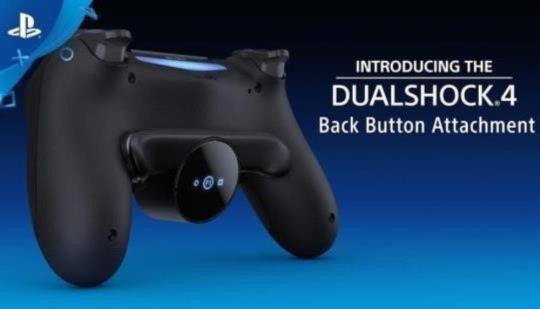 PSA: DualShock 4 Back Button Attachment is in The Wild Ahead of Official Release

Get ready because the DualShock 4 Back Button Attachment is hitting retailers ahead of its official release date of January 23rd.

Adhttps://www.youtube.com/watch?v=EjfojxXOobE&t=463s
- Comments (41)+ Comments (41)
TopNewestOldest
Expand all
The story is too old to be commented.

Picked one up at my local Walmart for $25. Pretty nice but takes some getting use to. I end up pressing the buttons accidentally from gripping the controller.

Which games have you tried it with?

Apex Legends right now. Mainly using it for things like the item wheel so I can heal and charge shields more quickly. Still playing around with different options. Takes some getting use to as I still try to use the basic controller buttons quite often.

If you play destiny map one to revive, you can revive turn and shoot at same time.

Can't wait to get this really!!!
Many times in days gone I struggle to press L3 to sprint and left D-pad to get a health pack..

Pressing the buttons accidentally sounds like a complete design disaster.

It forces you to actually relax your hands instead of stressing yourself with a death grip. Back button controllers have extended my old wrist gaming sessions on PC and I am hopeful this will for my PS games. Not a disaster, just muscle memory that needs retrained a bit.

I've tried it out, and find that the way I hold the controller, I tend to have my fingers where the buttons now are....especially when I'm really gripping the controller. I think they work well though. Hoping work will let me bring one home so I don't have to buy one, but I like it so far. So far, it seems like I can't order them from Amazon.

Ditto. Just picked one up this afternoon at Walmart as well.

It takes a while, as you need to learn to hold the controller in a new way, but once learned it feels natural, if you game Alot it takes about a week.

Map your two most used buttons on the game your playing and pretend the face buttons don't exist, you will get used to them faster and train your hands how to hold it, then you start to think of your own customisations. back buttons rock when you get used to them.

Sakai, I tried it and the response is natural. Having more options and quick keys is a welcome. I think this brings a new variable to controller design. Sony managed to test the product effectively. The idea opens more possibility for game pad design.

I wish MS would offer something like this for Xbox One controller rather than having to buy an Elite. Wonder if some third parties may come up with something.

RazzerRedux
Check amazon for Xbox One Collective Minds Strike Eliminator Mod Pack. They have 2 different versions from $28 to $34... they're cool to use. But one thing that strikes me as odd is the way ponies are so getty over an add-on where the battery liife is so taxing on DS4... What you gonna do stay wired (you can't compete with the Elite)😢

For the price of about 3 new full priced games, I certainly hope the Elite is a better controller.

It's amusing that you believe that it's about "competing" with Xbox in controller design; if Sony wanted to create their own elite controller(s), they'd have done so already. The paddles are likely a means of extending DS4's use on PS5, where the DS5 is likely to have them built in as standard. And furthermore, if you're serious about competitive gameplay, (y'know, that thing that is realistically the only reason to even drop that kind of cash on a controller?), wired is definitely better than wireless, though PS4's wired connection is still using wireless signals when wired, so irrelevant.

But you know what surprises me? Why are some Xbots so excited to fork over so much money in controllers every time a new one comes out? Literally, if you bought both Elite controllers day one, you've forked over at least $330 in one generation on 2 controllers. That is console money. Of course, people are welcome to spend money however they want, but that's remarkably cavalier with finances unless you're a professional gamer.

The back button attachment is not meant to compete with the Elite controller—it's an affordable addon that provides bonus function to the DS4, period. It's getting very positive reception, live with it. Stop trying to make fire where there is none.

$30 for extra features leagues better than spending $180 for a controller. There’s no denying that. Especially when the $180 option has quality issues.

It's not like we should settle for one or the other. I would like to have PS4 Elite controller for sure. But I can see that for big masses this cheap add-on is a better solution. Personally this doesn't solve my needs as two back buttons don't do it for me. Currently using Scuf Impact for Ps4 (4 extra triggers).

Early reports are saying that the users are pressing the buttons by accident, total disaster for the PS5. Almost as bad as removing rumble from Dual Shock 3 to put motion controls in.

I already hold the controller in a relaxed state how do you get more relaxed?

I dunno. But your comment wasnt a first hand account, so how do you know that the way you hold the controller would be a problem?

Not that I believe you have a ps4 considering your comment history.

The back buttons are fine where they are if you hold the controller in a relaxed state and dont grip them fully, but just have it cradled in the palm of your hand like I usually use mine except maybe in tense gaming sessions.

So in tense gaming sessions the pad is useless, thanks for clearing that up. I guarantee you i have more platinums than you. PM me for my PSN ID. I was there in the beginning with ps1, and defended ps3 against the 360 boys which you probably were part of, before everyone jumped on PS4.

Useless if you don't want extra buttons I guess.

I don't really care if you have more platinums, your attitudes in the forums are trolling, and if you can't have anything good to say about anything Sony, then your opinion on this is irrelevant, only compounded by the fact you're going by first hand reports which no one else has seen, and counter all the reviews of the product.

I loved them years before everyone else did. I hate how everyone loves them now, it used to be 360 fanboys downvoting ps3 players here, and i was in the thick of it. Now it’s all Ps4 Fortnite fanboys who jumped ship downvoting everyone else.
The reviews well IGN uk say you can’t hold it in intense moments of Bloodborne but fair enough. As long as i don’t accidentally perma-kill a vendor all is well.

Sounds like a user error then anything, plus I’m pretty sure it’s gonna be optional. Imagine not liking more options.

Early reports? Link these reports then.

Well user is a moron

I'd wager good money that all of these people pressing buttons accidentally have never used controllers with rear triggers before. It takes a while to get used to until muscle memory kicks in. Have you tried one yourself?

Whitbyfox was spotted trolling PS5 threads. This is his fourth one.

"Early reports are saying that the users are pressing the buttons by accident, total disaster for the PS5. Almost as bad as removing rumble from Dual Shock 3 to put motion controls in."

Guys, don't insult him or talk to him whatsoever. He's trolling on purpose. Report and move on.

PS4 controllers already heavy enough and unnecessarily taxing on battery life. I hope anyone who has use for additional mapping enjoys it, because my casual ass thinks this is the goofiest thing to happen to console peripherals in recent history.

It’s hardly noticeable on weight and battery. The screen in the back is OLED so it uses the absolute minimal amount of energy to stay on.

Playing with the DualShock 4 Back Button Attachment - STACK