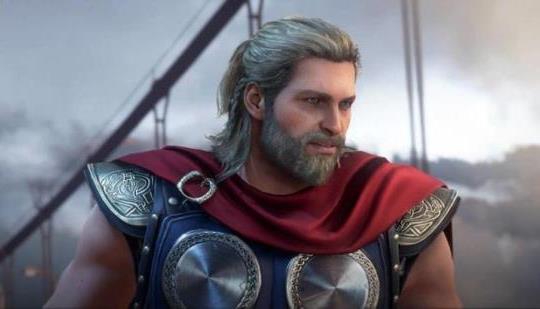 Marvel's Avengers game developer Crystal Dynamics says it expected criticism from the passionate fans of the Marvel's 80 years of history.

wow
you mean the thing that ever developer gets?
how did they know

Maybe they didn’t expect so much of that backlash, maybe they thought since they were working with a big franchise that it was going to be a hit no matter what and then they half assed it and people got mad. I know I got a pretty decent franchise in my crouch region, if I half ass my game, I get some serious backlash from the wife. But by that time the “game” has already been released and I’m not going to patch anything in, because, at that point, it’s time to take a nap

What did they do that was "half asses"?

Seems to be doubly true for anything comic or Star Wars related. They'll still buy it or spend money on it though, which is why no one making decisions listens to them.

I was listening to SIFTD’s podcast “GameFace” a while ago and co-host Matt Kiel said he ran into some of the devs at a bar the week of E3 2019 who were absolutely baffled at the poor reception to the game, completely not expecting it whatsoever... I believe that story more than this one.

Wow, if they've seen public reaction and were surprised then its not going to end well for them. Hopefully, this delay is them realising that the game lacks and needs more polish.

That said, the character models felt weird, like they intentionally made them look almost like the MCU counterparts. That "almost" came off really bad to me. They should have gone for a more comic accurate look or an entirely new design. Other than that I felt that the gameplay was a bit confined and heavy directed with severely underpowered characters.

The negative reception seems to be it looks like a cheap Chinese knock off.

I dont know why, its not like anyone was going to buy it.

What? It seems strange to think nobody was going to buy this game.

Especially when it's guaranteed success based on brand alone. Not to mention Crystal Dynamics know how to make a good product.

Oh you mean that Tomb Raider trilogy that fizzled out after the first game? With the new game being focused on GaaS and their history of poor decisions I don't really believe that.

MCU fanboys will eat that shit up like there's no tommorow.

Exactly. Not to mention kids, and mothers/fathers/grandparents who have no idea what they're buying.

This game is going to sell no matter what happens. HOWEVER! A delay is always a good thing. It gives developers a chance to fix things to release a better project. So, since we have seen practically nothing about this game yet, I'm going to take the wait and see approach instead of pretending to know everything about it yet.

I mean it happens when you give someone something totally different than what they expect.

Maybe should have made the actual Avangers the main protagonists of the game instead of Kamala Khan who is only known by a very small % of people?

SJWs in the gaming ruined Battlefield with this shit. Most TV shows are impossible to watch because of this. This game will belly flop in the sales department.

I mean, they clearly picked her because she is a dark skinned woman, is that not by definition racist/sexist?

People were talking crap about this game before they had that little nugget to reveal. It's like all the hate for EGS became retroactively valid because Epic gave people some reasonable thing to dislike, or saying that people upset over the captain marvel movie before any of the negativity of SJW comments made by those involved, were now not valid because people had a new problem with the SJW stuff that cropped up after the initial criticisms.

Sometimes, people just latch onto something to dislike, and they did since the first showing of the Avengers.

Captain Marvel SJW shit was started by Larson herself and her male-hating remarks, among other things, mostly bullshit. You know shitting on your primary targeted demographic (male comics fans). It didn't help that the movie turned out to be pretty mediocre in the end too.

As for the game in question - Avengers, did you like their reveal trailer?

Yeah, but people were not too happy with the movie to begin with. Not because of the SJW stuff, although some expressed that concern, but because it seemed like a bad movie. Apparently criticizing media that is too "woke"(love that we have an easy word to describe it now), is considered sexist and only misogynistic neckbeard children use it. Must be nice that these SJW types have a easy way to avoid any kind of criticism.

I liked the start of it, but the deeper dive at the same time wasn't that impressive. I felt it went on too long, and seemed like it just got worse over the course of the trailer.

When they started talking about the GaaS aspect of the game, I just lost interest, so I haven't really spent much time thinking about the game itself. When they introduced the main character, I didn't even care about the game anymore, and just shook my head at both the inclusion of the character because of the likely reasons for it, and the character design itself which was pretty lame. I don't have anything against the character herself, because honestly, I know nothing about her. She just seems like a lame Mr. Fantastic rip off.

The sad thing is that I'm sure not many care.

The devs don’t even care lol. “It’s shitty, we know and expect backlash”.

That's exactly what I took from this too.

Forgot all about this one. Much more appealing games coming out this Spring.

Videos from a few months back showed it could use some polishing. Glad they are taking this time to do that.

And they still went with the decision?

Usually, I’d think you’d want to steer clear of any kind of backlash, especially if you’re anticipating it.

And here I am just waiting for more Deus Ex as it sits in limbo as you make licensed games you seemingly don't even have faith in. *shrug*

This is a 100% no-go for me. So many more appealing games coming out this year.

Bunch of dudes in costumes. Immersive..

I can't wait for this game to fail

Literally the only criticisms I've seen for this game are cosmetic. People are pathetic in their desire to hate things in the gaming community. It's sad really.

All GaaS, no engine.

Eh. I saw the gameplay they released however long ago. Dollar store remakes of the actors that made these characters popular on the big screen. Gameplay itself looked fairly generic. Then they apparently tack on a little known character that didn't exactly make waves with those who were excited for it.

Don't get me wrong, I wasn't the market for this game. I've watched some of the Marvel movies, but you aren't going to see me buying the game, even on sale. It just doesn't have my interest. All the same, the issues I brought up does indicate a game that may turn people off. It doesn't sound like blind, unwarranted hate to me.

Maybe actually listen to the backlash which is probably majority the actual REAL fans?

I thought backlash happened when the game was revealed, then everyone stopped caring because it looks like boring GaaS trash. I do remember people criticized Black Widows face and they changed it the next trailer. So I don't know what they mean.

Meh, its obvious they didn't want to pay enhanced licensing fees for using the faces of people from the movies.

As for backlash, who cares. They are in the ballpark.

Another game delayed under SE.

Why is the game getting so much hate?

Weak character design. Uninspired game play. It's basically trying to be like Borderlands with co-op, but it's questionable if the SP is like that, or just lame. A main protagonist who was chosen due to SJW politics, and is not just a b-class avenger, but rather a c-class one. The main avengers story seems to be centered around them being all mopey and depressed, while they lament about how ineffectual they are.

List goes on, and while I don't necessarily agree with all of the above, I haven't been overly impressed with what's been shown so far. I guess Spider-Man and the less recent Arkham games set the bar high for comic based games, and Avengers just fell flat since it started being shown.

It was a no-go for me once I saw it's supposed to be a GaaS. Sounds like yet another forgettable slog of a campaign with barebones content on launch, a classic hallmark of your typical modern GaaS title. Not to mention artificial "depth" in the game by means of excessive grind and most likely restricting access all the coolest customizable stuff behind MTs/Season Pass instead of making them earnable in-game similar to Spider-Man

I strongly have faith in that story than this one https://www.liteblue.one/

Innersloth shares Among Us 2022 update roadmap