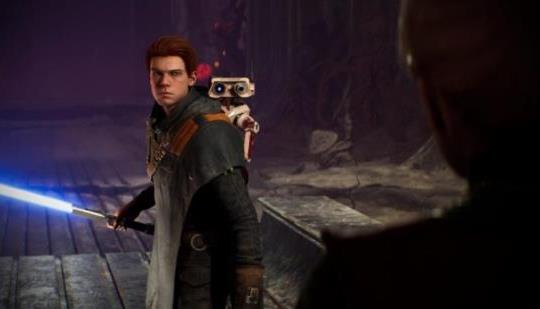 For everyone else, Fallen Order is a Star Wars game that builds on the pedigree of game director Stig Asmussen’s God of War portfolio. While that body of work doesn’t include the recent amazing entry, the core elements that have been part of God of War since day dot are the bones of Fallen Order; satisfying combat, epic storytelling, and a cinematic sense of scale.

Force Unleashed isn't good at all. Don't compare it to that crap.

@gaming the force unleashed was only okay. don't get me wrong it's a fun game but it was very short and really needed some refinements and extra length for it to be a great game.

I thought TFU was great. They f*cked up some of the boss fights but overall the gameplay was great with easily the best implementation of force powers in any game, and the story was excellent.

I still would've preferred a proper sequel to Jedi Academy with actual dismemberment.

To begin with the force unleashed doesn't have grand storytelling. It was mostly just displays of force power over and over. However what made the force unleashed cool was the ai and physics at the time which were pretty fun to mess around in. This game isn't a sequel to that in any way. The author is just describing a star wars game that did well earlier to coattail on that success.

He even goes off on a tangent to compare it to god of war instead in case you didn't play force unleashed which the two aren't in any way similar to each other. Either it's a force unleashed sequel we deserve or something similar to god of war. The game-play and things important in the two games are very different you don't get to just say this new game is both.

Finally from the article and descriptions of actual game-play I've seen this is more of a dark souls lite clone with a star wars skin. Which I'm not even sure if it will be good tbh. I'm going to wait and see gameplay videos and user reviews. Then pick it up at no more than half off because it's damn EA making this game. Not to mention everything in it seems generic as hell which people ripped days gone apart for while now they seem to love this star wars game like it's their baby.

Let's not get it twisted. This game got TONS of hate after that first gameplay reveal. People were complaining a out the slow looking Combat, showing looked like an Uncharted clone, and how it looked boring with uninspired levels and enemies that died in one shot. That seemed to be the general consensus on this site.

It wasn't until very recently when we started hearing about all these good interviews and first impressions of the game that people started really jumping on board.

Which mostly just tells me that a lot of that hate wasn't actually being thrown at the game itself, but because it's being overseen by EA. And you know what? I can't even hate on people for that. EA has earned, and deserves that level of doubt.

But my biggest fear for this game is that EA actually tried to push a good, single player game with no real, meaningful MT's/monetization, and we just ignore the game "because EA". This game could be one of those golden opportunities where we can show EA that this is the kind of game gamers want. Not yearly released MT riddler multiplayer schlock that takes no skill to progress in with no narrative.

Yep you're totally right my memory has officially slipped. But it did have euphoria which was so good for physics and throwing objects around