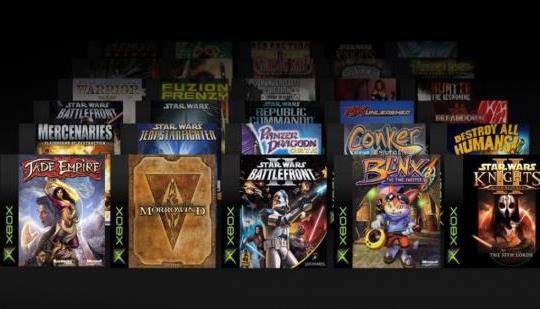 Relive the classics! There's a big backwards compatibility sale for the Xbox One featuring Xbox 360 and Xbox titles! Here's the full list of games.

I saw morrowind in the picture and was ready to buy it again, it’s not on sale though. Mind you, I might be tempted to get it anyway because it’s the best in the series.

bought it.. and was really disappointed. It hasnt aged well. Even in 4K. Its painful, and I hold it dear to my heart. I think nostalgia really changes the way we think of our beloved games.

Seems like something youd wanna play on PC if you could, maybe theres a way that on PC it runs a little better and is more modernized over and above what the magic of the One X was able to provide to the game to try and make it a little smoother at least.

It can run better on pc, and can even be modded quite a bit. But there’s something about the original look that just clicks with me.

Most older games do not do well with hd or uhd tvs, you need to use a crtv for them.

I bought an Xbox One X and Morrowind was the game I ended up playing more than any other game. It's aged fine. It's as clunky and ugly as it always was on Xbox but now it runs like a dream at a high resolution instead of 10 fps. I have played it on PC with the amazing complete overhaul mods but I still have ended up trading all that for a proper Xbox controller control scheme. Something about just lying back on the couch with a controller playing this is just so relaxing.

You can't always go by the picture. It's just a generic thumbnail for the article.

Thinking about getting caught up on the Crisis series with this sale. Wonder is any of these are enhanced for X...

I doubt they are but who knows. XD

Crysis 3 isn’t bad, the first is by far the best but keep in mind it’s designed for payers to be quite close to the screen.

No Ninja Gaiden games on sale. This BC sale is a disappointment

With all the new rumors of a new modern warfare this year and replaying the cod 4 remaster through the igc on ps+ I’ve been feeling the itch to go back to mw 2 these days.

Why no ninja gaiden black?

If you havent tried them...you gotta get Ilomilo and especially The Misadventures of PB Winterbottom

This is a BBC sale
Big, BIGGGG...backwards compatibility sale

“Story of seasons: A Wonderful Life” is coming to PC and consoles on June 27th, 2023