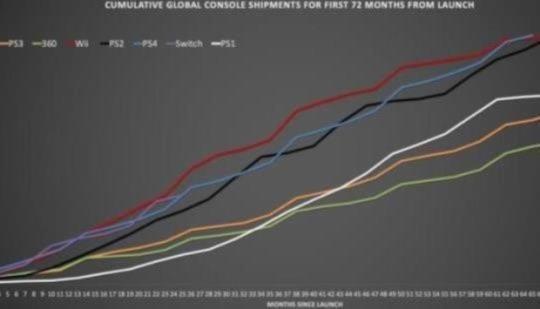 With many notable exclusives and an indie-friendly vibe, Sony's PlayStation 4 console is on track to sell 100 million units faster than the record-setting Wii. It’s also worth noting that it is outselling the PlayStation 2 at the same point in its life cycle.

It’s weird because it feels smaller than ps2 and wii, maybe because retail software is shrinking as people buy more and more digital.

What do you mean smaller? Consoles aren't digital yet. 100 million PS4 and 100 million Wiis are the same quantity.

When you go to stores you see so many less games than before, many stores that used to carry games no longer do and stores like GameStop are losing money. 50% digital now and growing, it’s going to snowball even more.

Ps4 is the best console available until ps5 is here which will be the best console again for its generation like every other playstation console that were the best for it's time. I liked the gamecube and the Wii a lot as a child which were proper appropriate systems for my age but looking back as a gamer I missed out a lot on thousands of games that were for ps2 and ps3 that were way better than games on gamecube and Wii. I cant believe the thousands of games and experiences I missed out on because I was young and naive especially games I could have played on the ps3. It's nice to go back and play some of the older playstation games on ps2 and ps3 but the experience is different than I would have had for the generation they were released in. I see some silly people making arguments about not knowing which one system they'd get next generation but a logical thinking person would know the ps5 is the best decision.

@meep
maybe the stores you visited didn't have the entire library of games. This is actually the most likely scenario because the stand alone game stores are a dying breed because of places like Amazon, and yeah digital. But the actual library of games is way larger on the PS4. There is no way you can fit all of them in a single game store.

I know what you mean meep. I was saying the other day how one of my favorite stores (frys electronics) had cut the amount of shelf space for games (and movies/music) way back and more items from other departments had moved in.

It just shows that stores cant allocate the same amount of space to current games because sales of digital is on the rise while retail is slumping. Thats just the way things go.

But what’s heavier a tonne of feathers or rocks. 🤦🏻‍♂️😜

That's because PS2 retail games were triple of this gen, Sony also made more then triple the games for PS2, PS4 as much less Sony games then ever before, and if you take out the indie games the console as less games then any of the previous generations of PlayStation.

Probably because of the time and budget it takes to make AAA games these days.

Have to keep in mind during that generation Almost all 3rd party companies where pretty much only making games for Sony, capcom, konami, square enix for example.

Smaller? The exclusive library? If so, yes. PS2 had more exclusives.

Smaller as in retail space, it’s way less because of digital games and amazon.

@meep316 I am still not understanding the structure of your comment.

It’s not really that complicated, do you know what retail is and how/why it has an affect on perception of how popular a product is? Half games sold on ps4 are digital, and it’s having a huge negative affect on retail. Pretty soon you won’t even see anything other than recent aaa games in stores, kind of like how DVDs are now.

Maybe you just don’t remember the ps2 days, those games were everywhere... you could even rent them.

Obviously there will be more physical games sold when they're actually available. I'm not sure how this makes it feel "smaller" though.

To people that do not Buy on the PS Store, there are 3 times less games in retail for PS4 then there were for PS2, since all PS2 games were retail only.

@Imortus_san I think maybe most posters here are too young to remember? Or maybe none of them shop?

Of the 2000 PS4 games, about half or more are Digital only, cause they are very low budget games and Indie games, so it's normal to see less games on PS4 then on PS2.

Great achievement, though it was expected. Don Mattrick almost ruined Microsoft's gaming department (luckily Phil Spencer and his team rectified the issues), and Nintendo doesn't have the same third party support that Microsoft and Sony benefited from. Sony profited from Microsoft's stumbles and Nintendo's lack of technological interest (hardware not to the scale of Msft and Sne).

Next generation will be the battle of exclusives. Microsoft we know will be prepared because of those studio acquisitions. Sony also to a certain extent, though both Msft and Sne heavily rely on 3rd parties for sales (buying exclusive advertising deals and such). Nintendo will benefit the most because they often, at times, supports their own hardware masterfully.

I believe a lot of people are overlooking Google Stadia. If done right, a lot of casuals will flock over to their business platform. Also, Google has money and can buy exclusives outright to compete with anyone.

So I'll end by saying, congrats to Sony for winning this generation of console hardware sales (even though it was handed to you).

You do know it wasn't a dictatorship under Mattrick? The decisions weren't his alone. Everyone - EVERYONE - is accountable at xbox for the ones failure.

People that didn't have decision making power aren't responsible for what happened mainly their draconian policies and the decision to make kinect a mandatory purchase. These 2 things alone guaranteed that they would be lagging behind the PS4 for the whole generation by a wide margin but for MS, the Xbox 1 is far from being a failure. Profit wise is much more successful than the 360 and the original Xbox but if you ask gamers I have a feeling that most would say that it's their worst console.

Of course Jane the secretary had no say, but to say it was Don acting alone is ridiculous. He was a scape goat, I reckon Major Nelson is guilty of spouting some outlandish rubbish - toeing the company line no doubt.

Profits that are attributed to the amount of paid services I would think.

Yes services and software is where the money is in this industry and that goes for all the platform holders and as for MS mistakes they have to be attributed to the man that was responsible for the division and MS CEO. Yes, some of the comments that were made by Penello, Major Nelson and that "deal with it" dude didn't help but the X1 was already a sinking ship due to the dumbass decisions made by those that had decision making power.

Like I said - it's not a dictatorship, one man does not make the decision alone. It would be voted and discussed upon, he was just the spokesman - much like a President or Prime Minister.

"Microsoft we know will be prepared because of those studio acqusitions. Sony also to a certain extent..."

So some newly acquired studios which haven't proven themselves yet under MS tutelage are a sure bet for the "battle of exclusives". Yet Sony who have proven game of the year winners and contenders for the pass few years won't be prepared or at least to a "certain extent" for the "battle of the exclusives" next gen? Riiiight, okay then.

PS4 success has very little to do with MS mistake. If it was then the Wii-U would have also sold better.

What did Phil and his team rectify? There has not been a single must have game from xbox since phil took over.

Really? Not even Forza Horizon 4 which was 2018 racing of the year?

"So I'll end by saying, congrats to Sony for winning this generation of console hardware sales (even though it was handed to you)."

Nope. Sony won with simplicity. Nothing more than a great console at a great price with some great games. You can be butthurt about this gen all you want but to say it was handed to Sony is delusional fanboy nonsense.

And those 2 consoles didn't have mobile gaming exploding around them, PS4 won't outsell PS2 but its another fantastic console by Sony. I reckon they'll do between 110 - 120 lifetime sales.

Numbers some companies can oyndream of.

I never thought this would be possible. Remember how fast the Wii was selling when it launched?

Wii sales started dramatically slowing down later in its lifecycle

It's interesting to see the PS1's sales figure. Month-over month sales only inclined moving forward. Only to hit a hard stop at the 5 year mark (this would be 1999/2000 when the PS2 was getting ready to launch)

I’m just curious about Generation 9 now, generation 8 ended long time ago when Wii U and Xbox one ended

By time Sony jump in with ps5 the switch not like the Wii U the Wii U had maybe a 2 year start and it was less than 10 million, the switch will be 3 years in March next year and will be around 50 million systems

Congrats to Sony for reaching 100 mill this year

People only compare switch to ps4 because Wii U die quickly

You are posting gibberish that's "how I confuse". Usually your posts are more coherent than that.

I thought it had fallen behind PS2. These are like Endgame box office numbers.

so that's around 50 million actual PS4 sales, and then the same number again when they upgraded to the PS4 Pro …
Imagine PS2 or Wii had Pro versions … or X version … or Slimline digital versions ….

The ps2 had 3 or 4 revisions, maybe more, the ps4 had sold more than 50 mill as the pro was getting released, there are not almost 50 million ps4 pros sold.

I wonder if the ps5 talks if the ps4 is going to get a price drop sometimes soon?!

So, this will make the PS4 the new fastest selling console of all time (to the 100 million mark). Hmm, I wonder why they have the 360 up there but not the xbox one. Even the switch is on here.

Because Xbox 360 is among the best selling consoles over 80 million.

Xbox One isn’t one of the fastest or best selling consoles like the others listed.

Switch is included because it’s sales are on par with PS4 in the same timeframe.

Why are PSN numbers so low though?

Why Are People Turning More To Modded Consoles?

Watch Dogs: Legion Will Not Get More Updates From Ubisoft