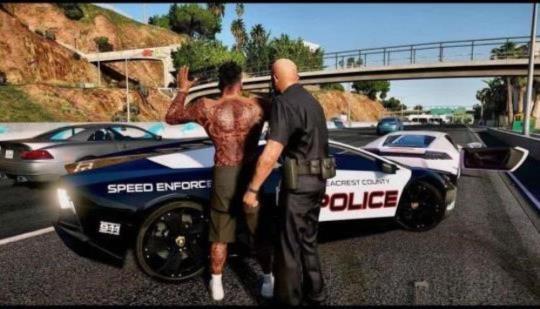 Adhttps://store.steampowered.com/app/1488200/Symphony_of_War_The_Nephilim_Saga/?utm_source=n4g&utm_medium=native&utm_campaign=sow_n4g_native&utm_content=png
- Comments (80)+ Comments (80)
TopNewestOldest
Expand all
The story is too old to be commented.

Lol I was thinking 100 million consoles or 150 million with xbox one by the time it releases.

This article is silly... What if PS5 releases later this year or next ... Rockstar might as well rerelease RDR2 and keep us waiting for GTA6

Which is bad for gamers.

People wont re buy it if its Backwards Compability on PS5

Yet many bought GTA5 on PS3, then again on PS4. Many bought the game on XBox360, yet again people rebought it on XBox One. Upgraded graphics, assets, resolution and frames per seconds seems like a good reason to get a repurchase out of people.

abnor mal
With time things change and tends to become expensive too... BC on PS5 will be a big boost imo.

Abnor_mal
Gta5 isn't bc though.

Abnor_Mal "Upgraded graphics, assets, resolution and frames per seconds seems like a good reason to get a repurchase out of people"

Is that a joke? That's like saying, "let's repurchase GTA V on pc every time I upgrade my GPU on PC."

It won't need to be. PS3/360 had vastly different architectures and the game probably wasn't designed with PS4/XB1 in mind. It'll be different with GTA6, and possibly will only need a path to be a PS5 game.

As long as Trump is the president i doubt that... lol!

What does that have to do with anything??

Letsa_go
It was a statement made by Dan Houser of Rockstar.
That he's glad they aren't releasing GTA6 while Trump is in office. Something to do with the sensitivity of those in office currently and their inability to handle satire

Ya disagree with me as much as you want Dan Houser actually said it what Monkey602 mentioned..

Here is the link

So they can sell it twice like they did with GTA V.

PS5 will be out before GTA6. It will probably be a simultaneous release.

I wouldnt even guess that. At least a year or two out from launch of PS5.

A new GTA will suck up even more resources than the new red dead, and red dead online still requires a lot of work too.

nope. Ps5 will be out, then gta6, but since most people would still have a ps4 you can bet it's getting a same day release.

I feel that way too... I expect RDR2 might be rereleased if anything

It's too soon for a PS5. I still believe it's at least 2 years away.

Next year we get the system.

GTAVI within the next few years? That is funny..

Prolly still be waiting for that RDO2 online update too.....

It's possible, five years between 4 and 5 and it's been five more since 5. I imagine they've been too busy rolling round in mountains of cash to keep to that time frame but 6 might be further along than you think. They keep their cards close to their chest so their radio silence about it means very little.

Won't be a PS5 release until Sony says so.

Of course they'll double dip, they'd be idiots not to. They clearly have the gaming industry eating out of the palm of their hand people will buy this 2,3, even 4 times and feel like it's a great investment. I'm calling 2-3 months before ps5 release

No they most likely are still 3 years away from GTA 6 they just finished up and released Red dead. Sorry

You do realize Rockstar is way more than just one studio right?

You do realize that does mean dick right?

Every Rockstar studio worked together on RDR2. There’s not one GTA team and one RDR team.

So every studio was touching the same thing simultaneously, everyone focuses on the same thing that's a model of efficiency right there /s. Rockstar San Diego does engine work, you really think the whole studio was working on the improvements for RDR2 up until the game shipped? No.

Every studio can touch or work on a game, it doesn't mean that's ALL they're doing. People have specialties, work gets finished in some areas, but the art guy isn't going to hop in and start programming. They go work on something else, whether that's DLC or their next game it doesn't matter, you don't just pay them to sit around.

Ahh who am I kidding, this is the level of tact you get from a Weeaboo anyways.

They don't have one team.

Same double dip philosophy as GTAV. 10 million on one console, 10 million more on the other

In this time and age bully 2 will never be made, too controversial, which is a shame.

Hey there... I don't think that this could happen. By the way everyone has a different perspective. Let's see what will be the resulting release https://prepaidgiftbalance....

I hope the PS5 is two years away or more.
I’m completely happy with my PlayStation 4.

Don't worry. You can still use it after the PS5 launch.

GTA V was released on 2013. Expect GTA VI in 2023 (at least) given the complexity it will have and continuously well-sold GTA V until today.

The writer believe that rockstar follows any semblance of a schedule is purely ludacris they release games when they are done and not before.

Also Dan Houser 6 months prior publicly mentioned that he isn't interested in releasing a GTA title right now and the political climate is just to hot at the moment for gtas take on modern satire.

ugh. how about they stop and create a) a new engine and b) a gaming system that is a little bit more interesting than the umpteenth open world galore with the same missions design again. i know, generic is what most gamers want, but c‘mon already. take the risk and produce something worth the while, i am bored to death by rockstar since gta5.

So two games? GTAV and RDR2 and now their brand of storytelling is just done eh? As for the engine talk, why would they spend the money building a new engine when the current one has been built on and improved with every iteration, are you really going to tell me you can't see the massive improvements from game to game? Get your eyes checked.

They could certainly improve the controls and shooting mechanics. Their games are such a lazy pop and shoot affair and everyone knows it, though they can't admit it.

I don't care what platform this hits first, as I'll have them all. I also found GTA V to be quite the bore campaign-wise. The only reason I buy the GTA games. I think I have Rockstar fatigue in general though, as I can't even be bothered to finish the epilogue with Marston.

Oh man, you're missing out on Press X to hammer.

Haha. I endured that nonsense, unfortunately. I left the ranch and built my own, but did nothing after that.

I think GTA has run it's course with me it pretty much the same thing all the time if it does come out it will launch on PS4 and Xbox One nd have enhanced graphics on PS5 and the new Xbox.

Red Dead Redemption 2 just came out and had every Rockstar studio working on it. No way GTA VI is coming out within the next 3 years.

I don't think so, gta vi is gonna be a full next gen title. RDR2 was the last game rockstar published on ps4 & X1

Nah it won't. May get a ps5 and ps4 release but they will release together.

Nah, it'll be a simultaneous cross gen release, it isn't coming out before the PS5 launches.

No. Rockstar is NOT Ubisoft. They actually put time and effort into their games. There's no way it comes out before 2021.

i thought the ps5 was gonna be at least announced this year? there’s no way r* has gt6 ready even in the next 2 years.

Whilst I don't have anymore solid info than anyone else, my best guess is that we won't see GTA6 until 2021-2023. I also reckon the PS5 will come out mid to late 2020. I therefore doubt GTA6 will be on PS4 first since the new console gen will have already been going anywhere from one to three years.

I know Rockstar would probably love to get people to buy the same game three times over but unless they manage to get GTA6 out BEFORE PS5 is released I don't see it happening.

If they release it on PS4 then I think they'll make a simultaneous release.

Needs to go back to Liberty City, I wanna play a mob guy...

Please don’t. Just rerelease a rerelease Max Payne 3 or remaster the old max Payne’s and make GTA 6 as great as possible with next gen hardware

No way in hell

PS5 I’ll be announce this PSX since they won’t be doing an E3 andbut will still have a PSX planned. Then released in Nov 2020

Because then later they can release the remastered version in 8k on PS5 and make more $merrrrny!$ We've been down this rabbit hole before.

If it arrives in this generation then it will provide an updated version on a new generation.

They have been working on GTA VI for quite a few years remember this.

I don't think so, with Red Dead they already seem to be headed far beyond with current hardware will let them do. take RDR2 add massive amounts of NPC density in comparison and vehicles that'll force you to stream/load all this at a much faster rate, yeah i don't see it coming out on current systems, or if it does it'll both run terribly and/or feel like a held back disappointment.

Absolutely no chance and that's without even bothering to read the article.

I've just checked my Nostradamus, no mention of Grand Theft Auto 6. Looks like Nostradamus either didn't care or found it too much of a stretch

With GTA Online going strong and RDR2 still ramping up, I don't see GTA 6 coming until way later and well into the next gen releases.

They just dropped Red Dead there is no way GTA 6 is coming any time soon. If anything Bully 2 will be out first

So they can sell it for you on PS4 and then stop supporting it and force you to buy it on PS5. Won't fall for that again. Nice try tho. Fooled me once.