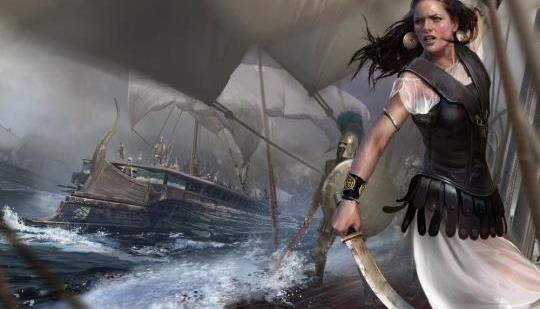 Female Generals In Total War: Rome 2 Cause Outrage And Drama

PC Invasion: There's some hilariously bad drama in Total War: Rome 2 due to female generals, review-bombing, terrible responses, and general outrage culture on the internet. Jason Rodriguez examines what went on in the past few days -- what caused all the outrage and how players reacted, as well as if this whole fiasco was even warranted.

pcinvasion.com
- Comments (30)+ Comments (30)
TopNewestOldest
Expand all
The story is too old to be commented.

Sounds like they've added the SJW cancer to the game after people had bought it. A weasel move but not surprising considering the type of "people" they are.

Its a game. Stop the outrage: it is silly. These aren't even real women, or men. They are pixels.

Did you even read the article?

Pretty sure we had this article yesterday.

Yeah a day or 2 ago. I mostly agree with people who are pissed since this games 5 years old and the devs basically told people deal with it. An option to turn this off/on in a patch wouldn't of bothered most of the people who are mad.

"An option to turn this off/on in a patch wouldn't of bothered most of the people who are mad."

Nah no need. Modders will have that shit sorted in no time. It is a big fuss over nothing because Modders are what made this game what it is 5 years later with things like Divide Et Impera and 40 stacks armies. If there's a problem modders will fix it, especially with something as simple as an appearance %.

Theres hundreds of easily accessible mods. If people wanted women generals mods would of been made already.(they may have been) to make them forced into the vanilla game sort of makes no sense this late in.

Lol and divide et impera was great. Somehow pikemen still managmanaged to be unbreakable bastards though set up properly

Always need to have some good cavalry to take care of that. Love using skirmisher cavalry when playing as Epirus and making a mess of the enemies formations while they're locked in melee XD

I agree it's not ideal, but like I said the modders kept this game alive especially after the initial controversy at launch.

Ya bait & switch. We want to put our money where reality is, not waste it on developers who can't understand reality.

For those who won't read the article.

You're responding to MONTHS old crap, you've been spurred on by people who are pushing an agenda the same kind that some of you feel Creative Assembly is pushing. It's been stated MULTIPLE times, that the percentages for the factions that can have female generals is very low with the lone exception being Kush at 50%. Romans, Greeks, Carthage are all 0%, as are the Eastern factions. Everyone getting riled up about this now? You're being manipulated, and it's been a fun few days watching people who don't or haven't played Rome 2 in ages getting upset about this.

This! Media in unison reporting on old shit and not even reporting the reason why it happened correctly. The outrage is over they way this person responded to the whole situation.

That's over a month. Seems to suggest that the outrage wasn't sparked by the comments themselves, but by people being told to be outraged..

'You're being manipulated,'
Unfortunately it's very common and most people don't get it.

I have a "friend" who likes to tell people they're conditioned by the media. Yet will gladly spread memes that paint other groups poorly, that have been debunked months or years ago.

It's truly insane watching all of this over the past few years unfold, SJW and Alt Right people seem like two groups standing on the roof screaming they'll jump. The problem is they've been doing it for so long they basically have to keep it up or, at least in their minds it means the "enemy" was right about everything and they were wrong.

This is only going to get worse too, so buckle up.

@WeebLord
We are all conditioned by the media. This is the era of the fourth estate I have to force myself to question everything I read and cross research information. I know it's not easy. The easy way that most people go for is to assume any article you read, video you watch etc is giving you correct information because why not.

I must admit at first glace I thought that said female genitals... I'm not exactly proud of that.

You should be. Female genitals are fun.

You are not alone, although I have not been awake long (that's my excuse anyway :) )

Jesus Christ, this stupid shit again?! It is a damn video game!

Honestly this won't really change a thing whether they make all the soldiers female or not it won't stop the game from being a mediocre entry into a stellar franchise.

I believe that people who seek to play games with themes based on the history of humanity want precision and authenticity, if not for that, they would seek to play other things with themes based on the present, future or something about fantasy. This negative reaction is only natural to me, it seems that the developers who care for these types of games do not know their audience anymore.

is this the new standard nowadays? Outrage and drama over male/female/ethnicity/SJW stuff???

Wait till Hollywood gets the Sword and Sandal bug again....Spartans and Romans will be Black and Asian women!!! Bet on it folks!

You mean, nobody really cared for months until SJW media created fake outrage so they can push their agenda.

Few people give a flying monkeys, but anything to disparage men, eh? You'll be sorry for this forced division one day.

Erm you really missed the point, and I don't see SJWs getting riled up about this. It was the other side that had a fit over this, if you paid attention and had basic reading comprehension skills you would have known that.

SJW MEDIA seem to be the ones pushing the story. I wouldn't be surprised if a large amount of the Steam reviews were written by like-minded agenda seekers to fuel the clickbait either.

I'm an avid reader, thanks. I don't need to have someone try to tell me that I lack intelligence, just to try and defend their bias.

Do you think the story is justified that after so many months of the female generals being programmed in, that people just suddenly are making a fuss now? I think not. It's more likely that journos just don't have enough clicks at the minute.

We had this already. Pretty sure the articles are making it out to be a bigger deal than it actually is.

ROFL when female biology gets morphed into sudo-male via human mainpulation (because these losers who can't get a man & can't handle reality), then you can make games which feature them doing male roles. Until then, accept that biological evolution has developed a mutually symbotic & genetically more stable pair bonding sex split: male & female. All mammals succeed above asexual for this very reason. Male & female have different biology on purpose to better ensure human survival & specialize on specific tasks suited to their biology given to us by evolution. This retarded notion of equal outcomes for all (despite gender, despite IQ, despite child abuse) is in direct conflic with reality. The more you ignore reality the more violence & destruciton happens. The lack of science of the collectivist cancern is disgusting- it's reflection in media: games, movies, tv is hillarious & pathetic virtue singaling cause these people can't procreate with the opposite sex that isn't a 5 or lower- because guess what?! they have won the genetic fugly or low-IQ- lottery. That's reality- get over it.

The only factions that have playable females have between a 5-15% chance. Romans, Greeks, Carthage, Eastern Factions are zero. Nothing they have done somehow challenges or destroys gender conventions.

Go outside, maybe talk to another human .

The Most Influential Strategy Games of the 2010s

Total War: Rome 2 is being review-bombed on Steam