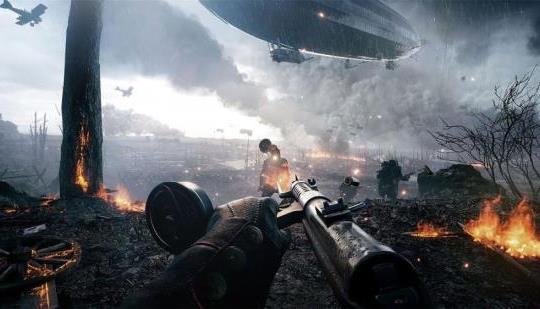 Out of all the video game genres, the first person shooter or FPS may be the most ubiquitous one. Shooting at random mooks with instruments of destruction that seem as if extensions of your own person tends to be hella immersive.

Some of my favorite FPS campaigns by generation are:

The one that had the biggest impact on me was definitely Halo CE. CAN'T BELIEVE THE WRITER LEFT IT OFF THIS LIST. A travesty! :D

I think the author started playing games in the late 2000s.

Yep! HALO: CE was AMAZING! I would say DOOM and Wolfenstein: TNO for me

Seems like the author didn't put the games in context. Some 90's campaings are objectively worse than a lot of average modern shooters. But, they were shocking when lauched.

Doom, Deus Ex, Duke Nuken 3D, System Shock 2, Quake and others were amazing for the time and must be represent on any list.

Oh, and where is Condemned!? That was an amazing FPS Campaign!

Don't you mainly use melee weapons in that game?

The title should be changed to “Best FPS games since 2007”. You can’t say ALL TIME and not have any of the great FPS campaigns that started the genre.

You are correct. The article headline has been changed to "Top 20 Single-Player FPS Campaigns Of The Last Decade"

They are all great games and I'm not disagreeing or maybe its my nostalgia but all these games are after the millennium....

Exhumed on Sega Saturn,Quake 2 on PC, Goldeneye on N64 must be mentioned imo.

Good list but you don't say all time and then simply skip half of it.

This is a terrible list halo 1 bests halo 3 story wise any day of the week.
Far cry 4 was possibly the weakest entry in the entire franchise and was called out constantly for being a copy and paste with a weak story and characters

As a FC fan, I would agree! FC Primal was better than 4 lol

I can't believe Half Life 2 is not here.

We screwed up on the headline, it should have been "Of The Last Decade" not "Of All Time." We've fixed the headline on the story.

Not saying all time...
But
Black
Where does portal fall into the genre? First person perspective, excellent campaign.
Half life belongs on the list.
I preferred halo 2 over all other campaigns but the original trilogy belongs in any argument.
Killzone 2 and 3
Cod:mw 2 and world at war
Resistance fall of man. For me, probably 2 was the best out of the series.
But like I stated, not calling them out for “a list” but in my mind these top my memory of FPS games.

I wanted to mention BLACK.. that is amazing game..it would deserve a remake

BLACK was awesome! I had it on OG Xbox. The Story was Meh, but the game play and destruction were top notch!

Black was great at the time and EA is just throwing away money by not doing anything with it.

COD WAW was probably the best campaign they (activision) ever did IMO.

I was glad to see Titanfall 2 make the list. Fun game!

If that list had been inversely numbered it would be almost close to being worth something. Killzone 2 shouldn't have been number 2 after Shadow Warrior but number one of course, but there would've been something to debate at least. , As it stands, with Killzone 2's campaign ranking at the 18th position, way behind Halo or Call of Duty, Doom 2016 or Fallout New Vegas and stuff (even "Bulletstorm...?!), and with the notable absence of Killzone 3 and Resistance Fall of Man and Resistance 2, that article is a joke.

I completely agree! I would have also had Half-Life and Halo: CE on the list.

Am I the only one who prefers Borderlands 1 over 2?

Killzone 2 I would buy as a remaster if it ever gets a re-release for current gen.

Man, I wish we got a new Red Faction true to the original, or even a remake from scratch. Still one of my favourite fps campaigns of all time. They ruined the sequel by putting style over substance, and I just couldn't get in to Geurrilla at all.

This list is laughable. So many dont even belong on the list, Call of Duty 4 is way too high, MW2 is missing, Half Life and Half Life 2 are missing, etc etc

Medal of Honour : Allied Assault used to be considered a top-tier FPS. Return to Castle Wolfenstein is still awesome. Where's Duke Nukem 3D? One of the Dos Doom games should have been on this list at least.

Bioshock number 1? I much rather Half-Life 1 or 2 than it. That's me though.

Condemned was great on the 360. That game was.one of the scariest fps shooters I had played. I shot every mannequin in that store level cause I thought they moved. Talk about a game messing with you. Killzone 2, Bad company 2, farcry 3, Timespliiters, Fallot, Metro 2033,Black.Duke Nukem, Halflife and Doom. I even loved the blood carnage of Soldier of Fortune. Arms, heads and legs flying everywhere.

No One Lives Forever,Medal of Honor Frontline,Call of Duty 4 Modern Warfare,Halo CE, Half Life 2,Time Splitters 2,Bioshock Infinite,FEAR,Breakdown,Chroni cles of Riddick,Rainbow Six 3 and Star Wars:Republic Commando to name a few

I would love a Killzone 2 re-master. I always felt like it was extremly "warlike".

Halo CE is greater than halo 3.
Call of duty 1 was also revolutionary for its time.

Turning Back Time: 25 Years Of Fallout And Looking To The Future