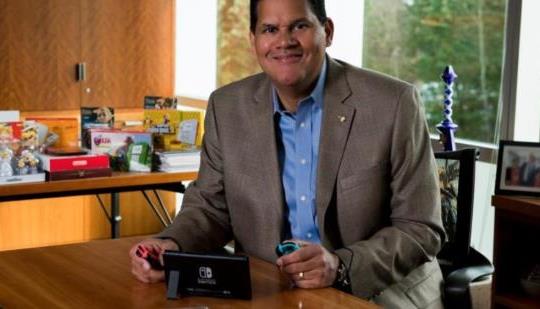 GI talked to Nintendo of America's president and chief operating officer about Switch in 2018, the possiblity of a Nintendo 64 Classic, and more.

Adhttps://www.youtube.com/watch?v=_iUAHlmkvuE&feature=youtu.be
- Comments (4)+ Comments (4)
TopNewestOldest
The story is too old to be commented.

As much as everyone riddicules Reggie he's doing a much better job than Phil.

Not really no did he make most powerfull hardware? Did he get bc on switch? Did he buy 5 new studios? Man cant even add vc a good online service switch is a port machine

If you care about powerful hardware, you get a PC.

BC is nice, but not essential. Wii was BC with all Cube games, but people bought it to play Wii games. Wii U was compatible with all Wii gamea, and people didn't buy it. Lol.

As for port machine... well... Xbox is also a bit redundant if you own a PC or a PS4. Again, Switch has exclusives.

Also, Reggie isn't exactly the equivalent to Phil. Reggie has to answer to Nintendo of Japan, amd so far it was Tatsumi Kimishima who had the reigns, which are now handled to Shuntaro Furukawa, who just replaced him.

As much as everyone ridicules the Cincinnati Bengals they are doing a much better job than the Cleveland Browns.