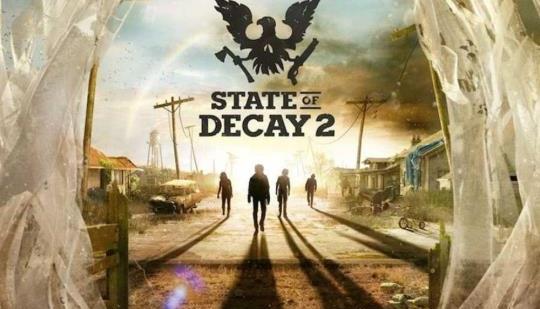 Johnny Hurricane of Gamers Heroes writes: Five years after the original State of Decay, State of Decay 2 launches on the Xbox One with co-op. Has this been enough time to make a better zombie survival game, or does this feel like an expansion? Check out our review and find out.

No. From now on they are giving away all MS published games on Game Pass.

Does that mean all MS published games will be early access?

What? You think the next Forza game will be early access ?

"What? You think the next Forza game will be early access ?"

The next Forza will just be a copy and paste from the last iteration. At least this is Horizons year though, we get a new map to drive around in!

And thus with the exclusion of the usual Forza/Gears/Halo retread, you’ll continue to see Early Access & GaaS as it’s a perfect match for a subscription service like Game Pass.

Lol 'copy and paste and new map'...what on earth does that make all the other awfully reviewed racers I wonder 🤣

Which will be the perfect excuse for them to release underwhelming titles.

"Hey the game may suck and be riddled with bugs, but at least you get to play it for "free" on Gamepass."

Actually to put you rite, there are two versions to buy one at 25 and one at 39.

And no it's not a DLC there is tons to do in the game over the current 3 maps that can be travelled too, and they mite add more.

Plus the 39 pack has a horde mode with it as well as other content and supplies.

Why do people care so much over a review score

But judging from the reviews of this game, the first game was janky but understandable at that time. I though the dev supposed to fix that in the sequel, but apparently it isn’t and is no excuse. State of Decay 2 is a mix bag game.

Because as gamers we've always been like that from the beginning. Anyway I knew when I saw this and SoT at E3 a few years ago they weren't for me. They just looked crappy to me, and neither one instilled a oh man I gotta buy an X1 again to play these two games.

I really hope MS can surprise me at E3, but I'm not really getting my hope's up.

In this case they more or less confirm how I felt about this game.

Because it reflects the games quality, at least it's suppose to anyway.

It’s more about value production. That’s why consumers need to know if this game is good or not. Apparently, State Of Decay 2 is mixed bag.

Because it gives an indication of whether people should spend their money or not.

Well it's a shame. I'm judging the Metacritic will not get above 75

Another mediocre Microsoft exclusive /shocked. Microsoft is batting 0-2 for this year.

It's a real shame. Both this and Sea of Thieves had huge potential. Sea of Thieves lacked content but was incredibly well polished. State of Decay 2, despite featuring multiple content loops, has some great content and concept ideas but was so rushed and buggy, it was hardly worthwhile.

Really hoping Xbox fans get something to sink their teeth into that does the console justice.

Highly unlikely we get a Single player game with a similar standard to the Nintendo or Sony first party games especially with Game Pass. Single Player games won't note fit the GaaS model with Microsoft, i.e. recurring revenue. Multiplayer type games with mircotransactions and DLC will likely push more profits and as you can imagine for single player, people can just subscribe for the month and then unsubscribe when it is completed it. so in this respect, Game Pass is not good for single player games as most people would rather pay one month of Game Pass as opposed to the full $60. This just shows how committed to Microsoft is to the genre.

Sea of thieves is not well polished.
Maybe not as bad as state of decay.. but it is not polished either.

It's just crazy to see yet another dud on their side.

Seriously, what the heck is going on at Microsoft?!

Another terrible year for microsoft and then xbox one.

Whe was the first Phil walked out with SOD2 Tshirt at E3? That's how long the hype for this game has been going on. How many times have we heard SOT, SOD2 and that abomination called CRACKDOWN 3 mentioned in the last few years?

Sorry MS supporters it ain't looking to bright in the future. Let's wait for spin at E3 to appease the masses for another year.

"State of Decay" is the perfect description for Xbox exclusives.

Damn not looking so hot

MS is this gens kicking boy....nothing they do is right or good enough, last gen it was SONY...the Wii U was kicked around as a Wii knockoff with a tablet controller but yet every Wii U game is ported to the Switch who is a darling and can do no wrong....if 3rd parties did for the Wii U like theyre doing for the switch , there would be a different conversation. All about flavor of the month....too many sheep in the world, nobody wants to think freely anymore and make their own decisions....just look at the comments section here....people giving disagrees to stated facts because everyone else does....

It's tough to blame the people here. You can't shoot the messenger :D

I won't pretend to know the ins and outs of a publisher/developer agreement but I fail to believe a passionate team, which Undead Labs clearly are, would release a product in this current state.

If State of Decay 2, with just its current features, worked and had zero serious issues, bugs and crashes, it would be a great game. Developers creative went in the right direction, pricing was great, it was rushed out. Developers fault? Publishers fault? I really don't know but it is tough to criticize people for voicing their opinions :D

No, Microsoft just isn't doing a good job with the Xbox One. All we get is one mediocre game after the other (Sea of Thieves, State of Decay 2 and Crackdown 3 will be next). The competitors are delivering one great title after the other. People are rightfully criticizing MS.

To say Sony was a kicking boy is putting lightly, at one point it seemed the media and some industry heavyweights were nailing the coffin. Relishing the fact Sony was having a hard time.

And didn't the xbox community let Sony fans know about it. You do remember those days?

Sony held strong, kept games as the focus of the PS3 and continued that momentum with PS4.

MS had a good thing with 360 despite RROD tarnishing the earlier yrs. But they became gluttonous and arrogant, and they haven't recovered - they've still got a few rotten eggs that should be culled.

😂😂😂 “kicking boy” 😂😂😂
From who? The consumers in the comment sections who has been Microsoft’s kicking boys for the last 6/7 years? Ok.
Get off the hate train excuse..
Microsoft’s media partners that tainted last gen?
Kinect capability lies that people bought due to said false pr?
Cloud lies?
Microsoft has made more consoles in the last 6 years than they have made new AAA games..
ummm they should be getting kicked hard from gamers.. lord knows the gaming media has been trying to help them for far too long.

the only truthful review

Because its negative it must be truthful?

I thought this would be the game to save Xbox :(

From what I’ve been playing, I’m enjoying it a lot. I can see why the reviews are lower, but it also is a $30 game that is not AAA. Not sure what people were expecting.

Well to be fair Phil himself mentioned it as one of their big AAA games at last year's E3: "I thought State of Decay showed up really well. Some people played State of Decay 1, but a lot of people missed it. Now we're giving that game time to really hit what we want State of Decay to do, because that will be an important franchise for us." https://www.eurogamer.net/a...

I think they delivered on that though for State of Decay fans. It feels like the game is just niche by nature

Not judging the quality of the game play, but the reviews I've read seem to indicate that it's pretty buggy. Fun, but the bugs and performance detract from the experience.

Generally, even with a cheaper game, people expect it to be finished enough to not show any major bugs. You're still paying money on it.

Agree 0Disagree 0
▼✖-+
SPAMInappropriate
Show all comments (55)
The story is too old to be commented.
50°

Best Zombie Games for Xbox One