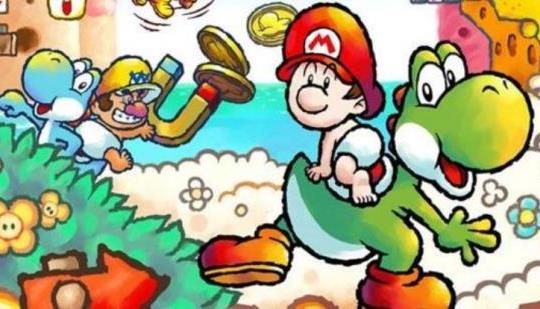 The Yoshi Series is Having Trouble Finding its Footing

Yoshi has been a part of the Mario series since 1990, but wasn’t the main headline of his own title until a few years later. The lovable dinosaur has been a partner to Mario, played sports, solved puzzles and even helped Mario shoot down enemies in a safari, but where he shined most was his platforming appearance in Super Mario World 2: Yoshi’s Island. Today this game is still praised as one of the best from the SNES era and as Yoshi’s best title by far, so why does it seem that Nintendo is straying further from what made it work in favor of Yoshi titles that aren’t as good?

Agreed, Yoshi's Island was the shit. One issue might be their attempt at keeping the graphics current-gen. They're so focused on realism they turned him into a ball of Yarn and now are having him traverse cardboard scenery. Yeah, the art styles look nearly perfected and in many ways near real, and if they tried to do a realistic jungle it might look imperfect all around, but the fact of the matter is they're too focused on gimmicks.

Forget the superrealistic art style influencing the entire game for a second, bring back the mechanics and design of the old ones. Even if the style is imperfected, they can do BETTER.

Some of it, like oversizing elements so they can show all the detail, or completely redesigning levels is hampering everything about the old games that made them special.

So what if they can't do a superrealistic jungle? Bring a cartoony one but keep all the core elements the same.

To be fair I liked Yoshi's Story as well. But these new ones are focusing too much on graphics to the point graphics are changing gameplay mechanics.

At least Yoshi has a new upcoming game

Where’s the next Wario Land title?

This. I'm fully expecting to hear about another wario ware though.

Critically maybe, but even there the games come out okay. From a sales perspective the games do perfectly fine, hence why Nintendo continues to make them the way that they are.

Relax, the new Yoshi game hasn’t come out yet. Let reserve our judgement until it hit the store shall we?

I think people are worried because of Kirby. They have always catered to similar audiences and it is not too far fetched to think that the new Yoshi will be shallow and too easy like Star Allies was.

However you are right, we won't truly know until it releases.

We’ve had how many entries In the Yoshi franchise now and how many have been as good as the original yoshi’s Island? I think people have a right to be concerned.

Yoshi's Island is one of my favourite games so it's sad that I agree with this for the most part. Yoshi's story was okay, the DS game was dumb if I remember correctly, it just got it wrong. New Yoshi's Island was it? was alot closer but was okay at most. I think the Yoshi Wolly world was a great game and actually had alot of the same feel as the original yoshi's island but in yarn form. I think they should copy the template of that and throw the original artstyle back and they'll be fine. Well and make music that's atleast addicting. Even Nintendo is starting to get weak on the music front. I think personally that SE games and Sega games are about the only game companies where I don't gotta worry about music. They always have music I love in the games I play from them

yea how hard is it to make a legit current gen sequel to freaking super mario world 2 yoshi's island?

Soapbox: 25 Years On, I Still Can't Get Into Yoshi's Island