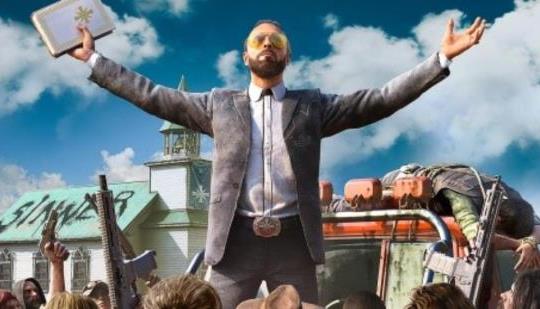 With the March release almost upon us, Ubisoft has released another story trailer for the game. And it’s actually pretty great?

I'll just get the complete edition in March for full price to support these developers. Game looks great.

"Finally" ? All Far Cry 5 trailers so far have had the "right tone". Forbes is so in need of a reality check it ain't even funny tbh...

Looking great can't wait . Taking out all these Religious Nut's will be even more fun than killing Nazi's in war games.

I never got the controversy behind this game. Both sides had some pretty dumb arguments. Like you would see the religious folk take offense at the bastardization of their supposed religion. You had trump folks thinking it was a hit piece on them. You had the left acting like rednecks “can’t wait to kill me some trump fascists!”.

I would read this stuff with a permanent face palm, I think it looks great. If anything you are liberating “trump people” from a left coast hipster cult lol. Both sides were stupid and got it wrong. Made up controversy for clicks. Forbes was guilty of this also I believe.

I’m playing FC4 now so I will be comparing FC5 to that, not assassins creed. FC4 is pretty awful so far so it won’t be hard lol.

I like Far Cry but I have yet to complete 4. Too much grinding and repetitiveness, though the game is fun in short play sessions. I missed out on 3 sadly, so I will be getting the PS4 version when it comes out. Not interested in the redneck bible belt setting at all but shooting does sound tempting.

I've enjoyed all the Far Cry games (except #2). Spent a lot of time on FC4 building my own maps. Hope they bring that back and improve it some. As far the "controversy" I don't really care. They're extremist. I'm Christian and I voted for Trump and I can't wait to play this game. This enemy is basically Westboro Baptist church nut jobs. It'll be fun.