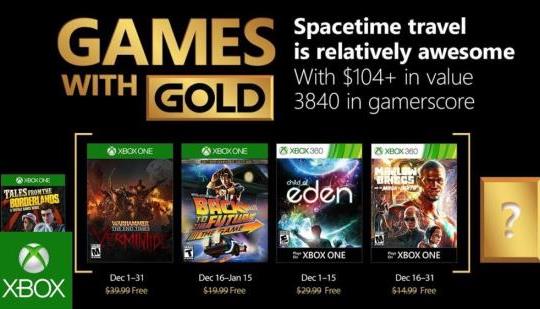 Are the free Xbox Games With Gold titles for December 2017 any good?

Neil writes: "It seems rather strange to be saying this but 2017 is fast coming to a close. Before we start to party the night away and usher in 2018 though, the Xbox Games With Gold scheme has got one last surprise up its sleeve - four free games being gifted to all Xbox One and Xbox 360 players.

But hot on the heels of November’s offerings that delivered so much (or at least three of the four did), can the free titles being given away during the month of December match up to the quality, or are we being sent a few duds that refuse to let us go out with a bang? We take a look at the good, the tempters and the, well, ugly."

thexboxhub.com
- Comments (9)+ Comments (9)
TopNewestOldest
Expand all
The story is too old to be commented.

I purchased BTTF on PS3 at the tail end of the system's life. I enjoyed Episode 1 but life went on and I never finished. I'm actually pretty psyched about getting that one.

You should definitely play Back to The Future. No matter what reviewers say, I really enjoyed this game. The story is awesome and the twist is just heartbreaking.

Child of eden + weed is a good time, trust me

Especially when one is Xbox One X enhanced, yes those are good.

Are video games art? Looking back at... Child of Eden

Why You Should Play Warhammer: Vermintide From Your Backlog