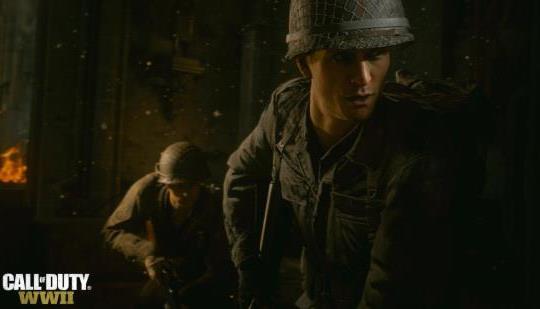 Activision announced in a press release that Call of Duty: WWII set a new record for sales in the franchise, with $500 million in just three days.

The game surpassed the openings of Wonder Woman and Thor: Ragnarok combined.

Adhttps://store.steampowered.com/app/1488200/Symphony_of_War_The_Nephilim_Saga/?utm_source=n4g&utm_medium=native&utm_campaign=sow_n4g_native&utm_content=png
- Comments (107)+ Comments (107)
TopNewestOldest
Expand all
The story is too old to be commented.

The MP lootboxes feel inconsequential in WWII. Zombies, on the other hand...

No moldy they apparantly dont matter to people who buy CoD, the same damn game year after year. Thats the damn problem to begin with.

Why should the lootboxes matter here? They offer cosmetic-only rewards just like in Overwatch.

@ultranova
In general... You probably shouldn't comment if you don't know what you're talking about.

Moldy should be complaining about REQ packs in HALO 5. Of course that is a Microsoft Product so he isn't going to complain. H5 REQ packs are an implementation that is specifically designed to grant Multiplayer advantages through a pay system. Its why HALO 5 moves faster. One you die you lose the REQ pack you had just activated. Rapid deaths mean people purchase REQ packs for the advantage it grants in Multiplayer and it isn't cosmetic. Also, you do not know exactly what you will get. "One Legendary and One Rare item" is an example. Loot boxes in SP is one matter. Loot boxes that grant cosmetic changes is one matter. Multiplayer where it grants a specific advantage that is more than cosmetic is a whole other issue.

And yeah I like COD when it stays in COD. When I cannot stand it is when other games feel the need to change their format to imitate COD.

As far as I know, while there’s is a loot box system, there’s no microtransactions. Plus, the game hands out loot boxes like their freakin candy.

moldybread dont mind this dummy ultranova as i'll say over and over again every single shooter is the same thing every release. battlefield is the same crap every OTHER year, like what really has changed from bf3 to bf4 to bf hardline (LoL) to bf1? absolutlely nothing but just cause hating call of duty is the cool thing to do people are gonna used the same weakass argument about it being the same when thats in fact every shooter is... look at destiny and even battlefront. its okay to be mad that call of duty is beating up your favorite shooter every year keep the hate coming haters like UltaNova is the reason CoD is getting their act straight and making a comeback starting this year...even tho it never left...how does novas salty tears taste?

oh and people saying cod never changed when they have boots on the ground to jetpacking and advanced movement back to boots on the ground?? thats sounds like change to me where battlefield is the same thing every OTHER year...stop being a blinded hater.

"Activision just announced that Call of Duty WWII has surpassed more than $500 million in sell-through worldwide in its first three days of release, topping the popular theatrical box office openings of Marvel’s Thor: Ragnarok and DC’s Wonder Woman combined, according to company estimates shared via press release."
Yes impressive but false, as Thor did like 440mil first 3 days worldwide not including Winder Women. They say worldwide for COD but only domestic for Thor and Wonder Women!

I'm having a blast with the campaign and multiplayer. Glad to see boots on the ground again, and not that jetpack, wall running, and jumping around like jack rabbits crap.

That's good news, looking to play the game myself later today on the Xbox One X.

The detail is excellent. Haven't played the story but the MP looks great!

I agree the jetpack etc was ok for a one off game like advanced warfare but two more games after that still using the same was a horrible idea.

The Advanced Warfare campaign was amazing, and the multiplayer was pretty good, but yeah definitely did not want 2 more years of it.

You must be young if you think this games good.

People wanted WW2 setting. We got it, Actvision got rewarded.

Now, if they listened to us more, they would make even morey money.

Listeing to your customers get's you rewarded, big time.

Glad Sony partnered with Activision and pissed off the xbox fanboys. Poor xbox fanboys' wish of COD's demise will remain just that, a wish and no amount of 'rioting' will change that. 😂😂

May this partnership continue to grow and prosper. Keep it up Sony.

Clearly morons exist on every platform.

honestly cut the fanboy crap out of your comments, you are getting really annoying

I have to agree his comments are very bad

You sir, are brilliant!
/S

I don't see and pissed off xbox fanboys in here...you take your meds this morning?

I still think not re-signing to help market CoD was one of the best things Microsoft has done this generation.

I did the first chapter of the campaign last night on my new Scopio Limited Edition XBox in 4K. I found it good but not great. The whole QTE thumbstick then button push mechanic is stupid near the end of the first chapter.

I will play multi-player for sure, but don't see this as a great game. It is "just another CoD".

I find it funny though that it is marketed with Sony, but the Xbox One X edition has the best visual experience for consoles.

@WaqarYounis18...
I laugh so much at your funny comments.

PS4 install base 65 million. XBOne install base 30 million... If it doesn't sell more on PS4 there is something seriously wrong.

The same thing can be said about DLC being 30 days early. No matter how hard sony fanboys try to convince themselves, differences aren't massive.

Prepare to get flagged

Wow the petty fanboyism going on in that comment

Well the game actually looks great and ww2 has been absent for almost an entire generation. I would of been surprised if it didn't do extremely well.

Plebs buying it in droves. "Boots on ground" was the tagline that was needed

Plebs. Good word. You sound like a maga kind of guy.

The rest of us who bought it are having fun. Enjoy your salt

How is that even relevant? What are you going on about?

But but the tha power of the x. In comes the Switch and smacks it down by outselling it this holiday season. LOL

Last year was too bad, this is back to normal

wait till people find out how stripped back the game is

Everyone hated infinite warfare before it even came out. A lot of people who hated the franchise were actually interested in this one. So I'm not surprised.

That along with the obvious: it’s actually good.

I haven’t been this excited for CoD since MW2. I count down the minutes at work in anticipation of playing it. I’ve hated the series since black ops. Good return to form

I heard the campaign is 5 hours long. Not wasting my money on that.

@guyman
"I heard chickens eat their own feces. Not wasting my money on that."

Sounds ridiculous, right? It's about as ridiculous as your unintelligent comment. If you've bought call of duty in years past for the campaign alone then you're just a fool.

I'm actually enjoying this COD. It's back to its roots finally. The loot boxes have no effect on gameplay and the epic guns you earn from lootboxes have the same stats as their normal counterparts. The only people that would complain about the loot boxes in WW2 is people who haven't even played the game.

Couldn't they have added the guns as rewards for playing and leveling up? I mean, they've made $500,000,000 in a few days. The loot boxes are just pure greed.

Again please explain to me how the loot boxes are about greed when 1. As far as I know you can't buy them with real money (yet) and 2. They are purely cosmetic. Please explain your argument.

Hmm, I guess this did surpass both Thor and Wonder Woman's openings. "The Fate of the Furious" made more opening weekend.

Why put two movies "Wonder Woman" and "Thor: Ragnarok" that did not release simultaneously world-wide and compare it to one of the best selling yearly video game franchises? Gotta make those stock holders happy

I hate when they compair money’s to a game and a movie it’s not really applicable. A games is 60 or more a movie ticket is much less That being said I have not enjoyed a COD game this much since MW3

Good sales for a game fans wanted. Going back to ww2 was the right move for the series. Wondering where they go next year.

400 Million $ in the first week for halo was called a disappointment by many on here
https://www.gamespot.com/ar...

Guess that numbers aint that bad for one platform with around 20 million consoles back than. If COD can only reach 500 million $ on 3 platforms in 3 days, heck, Halo hasnt slowed down. 343 even announced 16.5 million players on forge (the editor mode) mid 2016 and yet I still hear people call it a flop.

Yes, but your IQ is too low to understand this - Halo's 400 million include hardware, accessories,..., unlike Cod

i havent played cod since blops 1. I plan on giving this one a try, feel like ill get destroyed online though lol

Definitely picking this up black friday. I want to get it now but I'll be good and hold off for a better price.

All because they switched back to the WWII theater - which after BF1, was probably the right move. That said, COD: WWII is no BF1...not even close. I've had the game for 4 days and already listed it for sale on Craigslist.

Sucks for you then.

And without the modern warfare gimmick. Good job. I’m enjoying it so far, it’s the best cod I’ve played in years. Some minor annoying bugs but it’s all good.

Don’t care as long as the games are fun. I rolled my eyes at the “sledgehammer has low tolerance for toxic behavior”. It’s annoying how fruitcake developers have become, sure. They’re adopting the lexicon of batshit lunatic retards but hey, I can compromise and overlook the BS when games are fun. In the end that’s all I really care about.

How a MP game with a poor hit detection can break records is beyond me.

That's what happens when you listen to fans

To me, in my opinion, not forced on anyone else, not comparing my opinion to yours, not asking for your opinion, not trying to win anybody over but I am having a blast with this game. Let's see all the disagrees.

Good news, and it’s actually well deserved. Despite all the bandwagon haters online, the game is actually pretty damn good. It’s what core CoD fans have been hoping for for some time now.