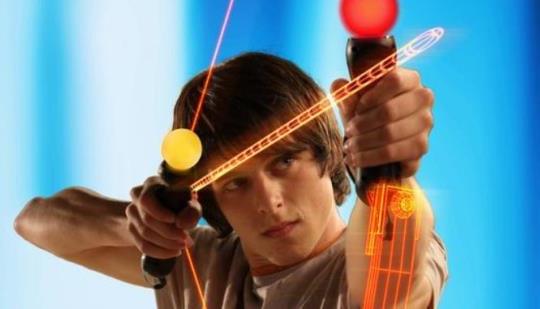 Is It Time to Move on From the PlayStation Move?

vrfocus.com
- Comments (7)+ Comments (7)
TopNewestOldest
The story is too old to be commented.

I wish they would have made the move with a stick controller at least. I highly doubt we get a replacement for the move before PS5/ PSVR 2.0.

YES! Absolutely. PSVR needs upgraded controllers baaaaaaaaaaaaadly. Move will not cut it for where the future of VR is heading even in this coming year. The Farpoint gun controller was a great addition as it at least supplied a D Pad onto it, but yeah....I expected SONY to announce new PSVR controllers at the last E3 and they didn't. :(

It's the worst thing about PSVR. So I really hope they come with something better. For many PSVR will be their first real VR experience. And it's such a shame the Movie controllers will be how they interact in VR as the alternatives are so incredible much better.

It was time when it launched

It's a tough call and position to be in. When motion controls were a thing last gen, Sony's was the best tracking controller out of the PS Move, Wiimote and Kinect.

Now that VR is a thing, Sony's motion tracking is the least effective tracking solution but understandable why Sony went with it. It is tracked in 3D space and inexpensive since it uses LED lights. The headset has no problem being tracked. But the controllers do have some issues. Especially for 360 degrees. PC is coming up with more solutions which is great but will hit players wallets in buying the next controller every time Valve or Oculus come up with new solutions. That increases prices. I think Sony was trying to avoid being so expensive for an inexpensive console.

But the controllers, although fun to use (and not heavy or sweaty like the article says), could use serious improvement with other solutions from other manufacturers now being better and having more options on the controller. It will get left behind without replacement or something to improve it like that Sony patent recently to track light in 360 degrees.
https://www.engadget.com/20...

As much as I love PSVR for renewing my interest in games and having fun, I agree something has to be done. There's an easy solution for the controller that I won't mention here, but going forward Sony needs to do something. Maybe that's why they're so quiet. Who knows. But they also need to stream line the cabling. I like the length. But the weight is distracting as it hangs on you. They may need to look into an inside out solution too. Why own all those sensor patents and be one of the leaders in it, but not use that tech here?

What may that be?

The trouble with Oculus Rift is it uses so many USB 3.0 ports and is harder to setup than the HTC Vive. The Lighthouse technology is the best but also the most expensive. Sony was obviously a lot more concerned with pricing since the PS4 is the most mainstream product of the three. That is one of the problems I have with consoles, not very future proof. Hopefully Sony can use the headset in the future and update its controllers and add extra sensor cameras.

Second camera is only part of a possible, cheaper solution under $100 to solving 360 degree movement. But doesn't solve input and controller accuracy in matching Vive or Rift permanently. And still won't have room scale because of the cables. But the tracking area would increase.

Technically,Sony can keep the LEDs. Even for PS5 by just adding something else. Crazy thing is that Sony already has the tech and the move controllers are capable of accepting it.

For now, I'm just going to keep having fun and see what the do initially. As their current product isn't a deal breaker.