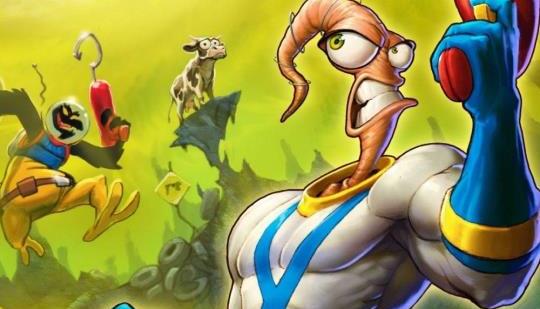 You may recognize Doug TenNapel. He is perhaps most notable for being the Earthworm Jim creator. You may also remember him from The Neverhood, a solid game followed by a poor sequel. ... TenNapel decided to try and drum up controversy by misgendering a Kotaku writer.

I'm not going to defend what the guy said but you say "to stay relevant" yet that's exactly what Kotaku did with that shitty article.

It was a mess and it just seemed it was done so people got their daily dose of "Kotaku does it again".

I mean, I don't think the Kotaku article was all that great, but I don't know that writing an article about Earthworm Jim would do too much to help Kotaku stay relevant.

It's not about Earth Worm Jim...it's finding something old and doing an article on it while picking it apart for silly reasons

The negative backlash of people disagreeing along with what's happened here puts Kotaku in the spot light. More people will then go and read the shitty article to see what's so bad about it giving Kotaku more views.

I'd honestly disagree that the reasons were particularly silly. In particular, I always found Earthworm Jim to be somewhat of a discordant game, something a person could easily just not get into.

With that said, an arguable bad opinion is pretty low on the "Kotaku does it again" scale, and I would argue doesn't compare to personally attacking the author.

The guy was only telling the truth. Not his fault if people today cry over every little thing.

The guy got offended by people criticizing a game he made. If we're going to talk about offense, maybe we should talk about his ability to handle criticism. :P

what truth are you talking, he is an old religious nut who can't accept criticism about his washed up game

Sounds like someone didn't like his work so he attacked them personally. Earthworm Jim is a classic to some and some don't like it. It most certainly isn't worth the attention it is receiving now. We don't live in a PC world where everyone has to like everything. And that's fine. I just think it is weak to attack others who dissent against you.

Really want an Earthworm Jim return. Have and love both games on my Genesis

Earthworm Jim was one of those games that hooked me on gaming when I was young. Absolutely loved it.

Fun games on my genesis!

Yeah. For as much as I disagree with how he behaved, I'd be lying if I said he didn't make quality work. Earthworm Jim was, if not a great game, a cool game.

"Heather, you’re a good man and entitled to your opinion. If you ever want to go into why we created the way we did in the 90s let’s chat."
Lmao!

"Trying to stay relevant" and "trying to drum up controversy". What a joke. He responded to an article talking about his game. A kotaku article of all things, garbage. I never would have known what he said but for this article. If he's not relevant why are you trashing his developer credentials? If he's trying to drum up controversy and you know this, why do you spread his word like a bunch of morons? Because he's not, you clowns are trying to create a controversy over "misgendering". We don't care. You care, congrats.

so instead of stating what is wrong with the article, he just attacked the writer. what a snowflake, he can't even accept criticism

Sounds like a 90s joke to me. When people weren't so "attacked". Friendly shit talk like we do here or with our buddies. The author trashed his game so he basically took a cheap shot and laughed at the modern kotaku criticism of a game made in 90s. Retro Bro.

"Hey pal, if you want a history lesson in our 90s game design decisions lets chat"

but she isn't his"buddy", if every game developer attacks the reviewer of his/her game at any point, then you would have a shitshow of childish name-calling like toddlers, he should have been an adult and criticize what's wrong about the article and not attack the reviewer

Every game developer doesn't do that though.. Take away "man" and the comment is perfectly fine. You act like some horrible obscenity took place. It's laughable. He didn't "attack" anyone.. He did say what's wrong with the article. The.game.was.made.in.the.90s. He even offered an interview to discuss the decisions he made in the design.

I will always take the game developers side btw, the media these days are useless middle men. I don't need the commentary alright, just give me game news. Most people played earthworm Jim 20 years ago. The criticism doesn't mean much now. I honestly think he was taking the piss. Childish maybe but harmless in nature. That's why I say good for him. I'd tell kotaku to get lost too lol.

He didn't attack the writer, he was pretty polite I thought

"I don't care, also here's a paragraph emphasizing how little I care." Get a grip man lol. I'd sooner not demand that people care, but it's really obvious when people do. Doug didn't respond to the article, he responded to the author of the article. If the article was shit, and it may very well be, it doesn't change the fact that his point was not to call this out but to demonstrate his sensitivity over the matter. As I noted with painstaking effort, even if you don't care about misgendering, a developer insulting a journalist because he didn't like what she had to say is never good for this industry.

I care to a certain point sure, I'm amused at how bad that article is. The contradictions, the projection, the unknowing promotion of someone they claim to be irrelevant and needed this publicity to stay afloat. What utter nonsense and I do care enough to point it out lmao.

He did respond to the article by saying the author was full of crap. Modern hipster arguments on a 90s game. If the article was shit (and let's be honest it's kotaku) they deserve no sensitivity. Was calling the tranny a dude insensitive? Sure but Kotaku has trashed people all day everyday so they get no sympathy from me. I'm surprised they still exist.

I say good for earthworm Jim guy, with his earth shattering one liner that could topple an industry...You painstakingly displayed that modern game journalism is dead. This is what we get now, the earthworm Jim guy needs sensitivity training lol. Plus, the fake media isn't a part of the "industry". Unless they pay you to promote their products obviously. You are then just a marketer, a propagandist.

*shrugs* I'd have to disagree with projection, though I can certainly see why you'd take it that way. I'm no Doug in terms of accomplishments, but it's a little embarrassing that he found himself so affected by a mildly critical article about a game he made decades ago.

As far as "unknowingly promoting his statement," don't worry, I'm well aware that spreading this information gets more people to talk about it and invariably creates a real possibility that he benefits from it. It's just the nature of the situation. and inevitably a risk that reporting on a dumb thing a person will carry.

And by the way, "Earthworm Jim is mean-spirited and not that good" shouldn't be the stepping stone to "modern game journalism is dead." It's also a big leap towards even bringing up "fake media." And ultimately, the fact that Kotaku has and continues to do dodgy articles and themselves trashed people does not have any relevance to this specific writer. Heather to my knowledge did not trash Doug, so Doug merely justifies any trashing he may get by doing it himself. He's a grown man, he should know better, learn to take criticism, and make a good sequel to The Neverhood.

I think everyone should learn to take a little criticism sometimes. Including the misgendered. It was clearly shit talk and could be considered childish but I don't think a campaign against him is necessary. I see it as a joke personally but I'm an early model millennial 😉

I'm a late-model millennial; apparently I've been taking things personally before it was cool. :v

You were the first version of the thinning skin model. The slim.

That said, this is certainly not intended as a hate campaign, more just as a cautionary comment about stuff like that. I mean if it was, you'd have seen me calling for EWJ to be boycotted.

I see no difference. Is it not a call to arms in a fight you deem just?

He has as much right to call dude out as the dude has to change his name to Heather and pretend he's a woman. This idea that we all have to accept peoples life choices is a total farce brought about by the weirdo loving celebrity apologists. "Heather" should realize if he's gonna throw shade he's gonna get shade thrown right back.

"Stirs the pot"
Translation: He doesn't toe the progressive line.

Fixed it for you.

God everyone is so sensitive nowadays. I actually laughed my ass off when I heard this. People definitely have the right to call themselves whatever the hell they want, but they do not have the right to dictate what I can and cannot say. So many other problems in the world and this is news lol.