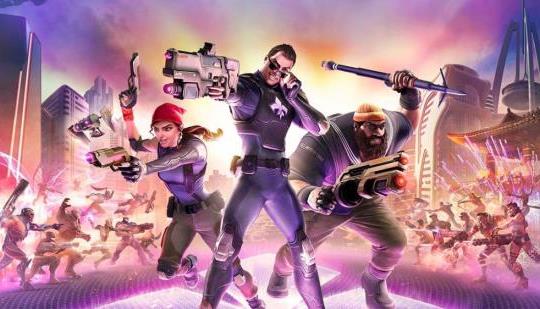 Agents of Mayhem Is The Real Crackdown Successor | CGM

Agents of Mayhem was on full display at E3 2017, and we got our hands on the upcoming Deep Silver Volition open world shooter.

I'll wait for Crackdown 3 thank you very much. 4 player co-op, multiplayer online, plus them orbs are crack.

I don't have that much time in my life. Just now finally getting to Horizon Zero Dawn haha

I get so tired of a clickbait, Crackdown has nothing to do with this game they should have just talked about the game itself.

Seems like a lot of people are trying their hardest to downplay Crackdown 3.

I'm getting both. I can see what they're saying but I don't agree. That's a long article on something they only know about through hearsay. I'm not calling them wrong I'm just wouldn't trust anything the media says these days. A better crackdown 1 is a winner in my book, I enjoyed the original so I will see for myself. There wasn't a deep story or deep characters in the first. The agency director dude was the real voice and comedy, it didn't matter what character skin you chose. It wasn't a satiric jab at our modern culture rot, you just beefed up to the point you can jump buildings and throw cars. I don't think I ever upgraded my driving completely lol.

It doesn't need the fancy cinematic story or the humourous characters in a traditional sense, it needs more systems. Utter destruction was a system that was going in the right direction. Things like the nemesis system fits crackdown perfectly. Randomly generated characters and hierarchies are the best way to flesh out these games storytelling wise. There are only a few devs even attempting this dynamic style but it will be nice when it's a standard.

Nah, crackdown is something special

Nah neither compares to Saints Row 3 or Mercenaries : Playground of Destruction

I was hoping Volition would reboot saints row. I might be one of the few people that liked saints better than gta. Here's hoping this game surprises me.

This game looks more unique no doubt and will have a better open world..crackdowns world looks barren and boring

Show all comments (27)
The story is too old to be commented.
40°Fresh