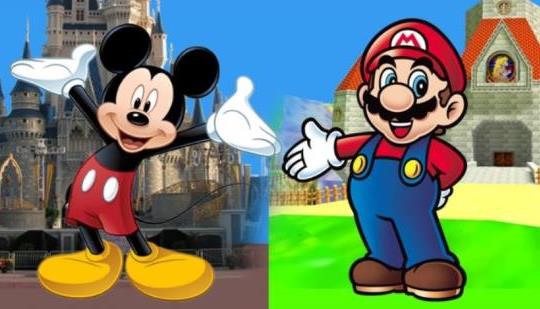 Why Disney Should Buy Nintendo

I mean they bought star wars and marvel. They are a HUGE company so it could potentially buy it but Nintendo would probably cost what marvel and star wars cost combined and a little more so I doubt it.

When I think of gaming I have indeed always thought of Nintendo being the Disney of gaming.

They are one of the only publishers who make timeless IPs and ones that reach the biggest audience from young to old.

I don't think they are going to take on that risk as of right now Nintendo is worth about 34 billion and I don't want them anywhere near Nintendo.

Why would you think they would ruin it? Last time I checked Marvel and Star wars have gotten better after Disney bought them. Disney knows how to handle valuable IP in my opinion hence why they have stuff like Micky Mouse and pixar movies and more.

Disney is also big in Japan, 3rd largest economy, buying Nintendo would cement their presence there even more.

It would cost a substantial amount though. They spent 8 billion in total for marvel and Star Warsl, they have around $90 billion dollars in resources to spend though so they could potentially buy Nintendo but it would be risky

Well lets just say you cant say Disney runs things into the ground like most companies would of done who could of bought Star wars or Marvel
Im just saying if someone where to buy Nintendo you couldn't find anything better than Disney to buy it.

I honestly think Sony or Microsoft would actually be worse

Star Wars Force Awaken generated over 5 billion dollars alone, around the same Nintendo generates in a good year. The risk wouldn't be that big and it would cement them as a global powerhouse.

"Why would you think they would ruin it?"

It would hardly be any better than a Vivendi takeover. The only brightside would be that Nintendo could use Disney properties, but even that wouldn't matter much anyways since I'd give it about ten to fifteen years before it killed Nintendo (Pixar is a shining example of what it would do to Nintendo).

SW has not gotten better only the cgi cartoon has and Marvel only the movies has gotten better not the comics they seriously had a blm comic it got cancelled after the second book lol. It doesn't matter if Disney is the 3rd largest economy that would not help Nintendo what so ever and even Mario is more recognizable than Mickey at this point.

Rogue One was the shit!

The last 2 star wars movies were far better than the prequel trilogy.

Unless you're talking o my about Japab, no, Mario is not more recognizable than Micky.

Unless they're willing to buy it for 100billion dollars, then not a chance.

I think Nintendo would cost a good bit more than those so if imagine it would be difficult to do so. It would be interesting though. Imagine a new games based on Disney characters and worlds with nintendo polish?? That would be cool

Marvel and Lucas Arts were for sale. To my knowledge, Nintendo isn't. Even though Nintendo is publicly traded, the controlling group would have to want to give up their shares for this to actually happen.

1.) Disney doesn't even care about videogames enough to try and keep Disney Interactive Studios afloat. That publisher's closure cemented that Disney isn't really that invested in this industry.

2.) Besides that Nintendo turned down Microsoft's offer of a $25 billion buyout in 1999, so it sure as hell wouldn't accept any offer from Disney. And Disney sure as hell isnt going to offer more than $25 billion.

3.) Even if Disney bought them, that would present a lot of other complications. Would anything with Disney content like Kingdom Hearts be made exclusive to Nintendo platforms cause Disney wouldn't want to compete with itself by allowing its own inhouse properties on rival platforms?

The only benefit I can see in a potential buyout would mean that we'd be one step closer to an actual Mushroom Kingdom Hearts.

You keep this site alive.

I'd kill for Mickey in Mario Kart.

Mickey in Super Smash Bros would be a lot better

For Smash, I would do King Mickey for the moveset.

I was a huuuuuge Mickey Mouse fan as a kid . . . Mickey Mouse bed sheets, Mickey Mouse curtains, etc . . . I still find the old cartoons pretty dang entertaining. However modern Mickey Mouse has pretty much been burned to the ground. I'd still LOVE to see him in Smash Bros or Mario Kart though.

"The only benefit I can see in a potential buyout would mean that we'd be one step closer to an actual Mushroom Kingdom Hearts" I'm totally up for that . Throw the Smurfs in their too, the more the merrier! Jk.
Overall tho, well said comment, my friend. I agree!

Would like to add to this that in addition to the Disney interactive stuff, they also shuttered all of the video game related stuff they purchased with star wars almost immediately upon buying it. I don't get the sense that Disney is a company that knows much or cares much about games. It prefers to license its stuff out and just pile money while other people deal with it.

No thanks. Id rather not see that happen.

If they did, im pretty sure there wouldnt be shortages of productions on their consoles...

Nintendo knows they would lose identity.

Nintendo lost its identity with the wii and put themselves 6 feet under in a graveyard with the wiiu. The switch should have been the 2nd comming to christ instead of a wiiu.5. Only nintendo can dress a handheld up like a homeconsole call it a hybrid and only be marginally more powerful then tech from 2012 (wiiu).

Nintendo is doing what they've always be doing for years. I don't see how they lost their identity.

Ever notice how these elitists want us to support all our entertainment coming from the same mega-corporations? Just keep buying up all the small ones until all thats left is 2 or 3 corporations spewing out the same stuff.

Why stop there? Why not just have Disney buy the world? I mean, the ideal situation is to have one company decide the entire entertainment industry isn't it?

Disney, please buy every form of entertainment, because you guys do no wrong.

Good for Nintendo tons of new Characters for Switch , bad for those that don't have a switch.

Actually it's a great idea .

WTF. Responding to yourself?

At this point, it would take many generations for the old fossils at nintendo to die off and pry their old outdated ways from their cold dead fingers lol. I was ready for change with the wiiu... And ready for change again with the switch... Guess ill wait another 5 years. All the while, ms and sony continue to push the envelope with services, games, graphics, 3rd partys, online... Its sad but nintendo just wont get out of their own god damn way. 10-15 years ago nintendo used to be the shit... Hell even then i was a nintendo fanboy... I can admit it but i was never a blind nintendo fanboy.

I agree, adding exclusive Star Wars, Indiana Jones and Marvel games to the Nintendo 1st party lineup would actually make Nintendo a must buy for a lot of gamers.

Really? It screams out of place to me. I love Star Wars but I don't want it in games like Smash or Mario Kart.

Well they couldn't do the X-Men or Spiderman because Disney doesn't own the rights to them.

All of these billions and people in the US are barley living. Would be better if they donated billions instead.

Where do you get your info from? North Korea videos?

You live under a rock or something?

Around 13% of people in the US have been defined as living 'below the poverty line'. That means their daily income does not afford them basic necessities. That's 40 million people living in the worlds biggest economy who are living at 3rd world country standards.

I'm not some lefty socialist, but that is pretty disgraceful considering the US has several companies bigger than countries in this world.

US doesn't have billions of people. I live below the poverty line since I was born. Now it's because I am disabled. Again there is not BILLIONS of people in the US let alone BILLIONS barely living in the US.

I'd argue its even more then that.

The USA favors companies over its own people.

Its been this way for a long, long time.

Who said anything about billions living in the US?

He might be talking about all the money flowing in the US, yet its people are poor and suffering.

He even states " Would be better if they donated billions instead"

So...I mean based on your logic of not really understanding what he means, you might as well assume he is talking about donating billions of people since we are just making things up lol

Sooooo does that sound like he thinks 1 billion people live in the USA?

You seriously need to read people's comments, I've noticed many times you'll post, yet your post doesn't really sound like its fully read or even slightly understands what people are saying.

Not even joking when I say this, seriously read.

Clickbait. Nintendo has a ton of money. They don't need anyone to buy them.

Yea, after the way Disney [email protected] the hell up of Star Wars, can't even imagine what they would do to mario. Probably make him a black, politically correct, transgender raccoon. Disney needs to go away already. Mickey Mouse club turning queers.

If Disney gets Nintendo than Link could be in Kingdom Hearts, holy cow.

Apple could buy Nintendo. Hell, they could buy Disney along with them too.
Oh the irony, Disney's largest shareholder is Steve Job's Trust. So the money is not really moving hands that much...

If it means more games to be made for the platform sure, I would love to play Disney games on the Switch.

I think Nintendo might buy up DeNA. As for Disney buying Nintendo, nah it won't happen. Disney would probably buy EA as they already have a working relationship with them and there is very little cultural divide between the 2 companies.

I fear that Disney is slowly becoming a monopoly. It bought both Marvel and Lucasfilms. As far as comic films go, there is not much in competition. If it takes Nintendo it pretty much took the only gaming company that its target audience is kids and families. ....

Will never happen. Nintendo is a part of the Japanese culture and the country will never allow Nintendo to be owned by a foreign company. If it came to that, Japanese companies would step in. In addition, even when things looked bleak for Nintendo, it was sitting on a mountain of cash and never really looked vulnerable so I hardly think Nintendo is available now with the success of the Switch.

PLEASE NO. Disney would destroy Nintendo.

I don't want Disney to ruin Nintendo with their junk political agenda, so no thanks.

What exactly makes the author of that article think that Nintendo is for sale?

Agree 0Disagree 0
▼✖-+
SPAMInappropriate
Show all comments (73)
The story is too old to be commented.
70°