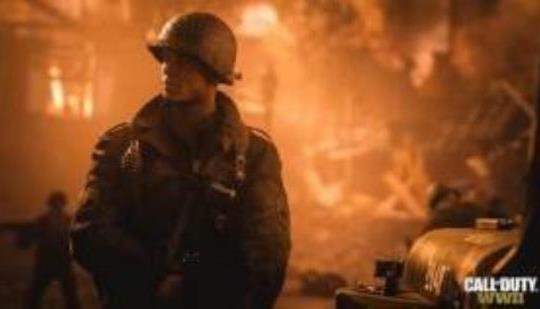 Call of Duty Trailer Impression: Anyone Else Still Burned Out On WWII?

The new Call of Duty is stepping back into World War II and the first trailer leaves us with some impressions worth noting.

Adhttps://www.releases.com/?utm_source=n4g&utm_medium=native&utm_campaign=c1
- Comments (33)+ Comments (33)
TopNewestOldest
Expand all
The story is too old to be commented.

For me, it worth something. Because WW 2 will never get old for me.

Really? I can't even watch documentaries about it anymore.

For CoD I'd actually prefer that they simply create their own wars, why not about current geopolitical conflicts? It would have a much bigger social impact on our world and I would maybe even start buying their games again.

For a long time I'm burned out on fighting againts arab npc's in dessert settings, and using jet packs, drones, thermal views etc but never got bored of WW2, wheather it be realistic or alternate history

As long as we don't see WW2 happen every year. CoD studio's need to stop copying each other and the three studios need to do different era's. I hope we go back to modern era next year and cold war era the year after. Keep every year different and fresh rather that put everything in one basket.

Twoforce, a lot of innocent people died in WW2, it wasn't made just for your pleasure

Seriously complaining about WW2 when it's been about a decade since CoD did it last? No just no, it's a thousand times better than the 3 years of being a poor man's Titanfall and even the later modern games.

They complained about future warfare, now they will complain about past warfare. There is no scenario that wont draw their complaints.

no, I welcome any WW game.

I like to play in a realistic conflict between two equally threathning forces. WW2 is the best one to portray a large scale conflict with huge impact one western civilzation. Those made up conflict doesnt seem to be realistic. A modern war simply put wouldnt be fought like that. And they seem to move away from the one man army the last games have focused on.

I was burned out years ago when literally every shooter on the shelf was WWII.

That was about 10 years ago.

About a decade ago I would have agreed woth this statement. However, today a WWII shooter seams like a breath of fresh air after all the futuristic FPS games we got.

So, I believe it's you and a very small minority who is "burned out" of WWII shooters. But I see that it's a good reason to complain about CoD. Let me guess, if it was another space shooter like previous CoD games you would be "burned out" of those as well.

It seams that conplaining passes as journalism in this day and age. Just get the clicks and the $ will roll in. Disgusting.

considering the last WII game was 10 years ago, everyone is burnt out on the future warfare stuff.

Not even the slightest. There's areas of WW2 that haven't even been touched upon in gaming. However the newest Call of Duty seems to go back to the same old same old without exploring the era at all. Obviously it's early on and I'm sure we'll hear more, but I'm not holding my breath for it to break any new ground. Either way, the setting beats the past decade of Call of Duty games and I hope it fosters more games set during WW2.

I actually have faith in Sledgehammer, and i'm more than happy to be rid of wall running and jump packs.

No. Everyone's burned out on future crap. I'm considering getting this years CoD game if it lives up to the boots on the ground gritty war setting.

World War II is the best real war history ever, why would WWII get old? There is no antagonist more intimidating then the Nazis and Adolf Hitler. These people killed 6 million Jews, and also many scary stuff happened in the concentration camps. I just visited Berlin, and Sachsenhausen this year. I wanna experience WWII again, like i did in Call of Duty: World at War. Such scary experiences these soldiers went through, I hope they make it even better then World At War. Now I finally see a reason to play Call of Duty again after Black Ops 1. All that futuristic stuff wasn't my cup of tea to be honest. Would be cool if they added a mission where you play as a Nazi, or someone who is forced to be one like many soldiers didn't have any options to choose or they would have been killed. I think there is many new creative things they can do with the campaign mode this time around. I hope DICE also makes Battlefield 2, which would be a sequel to Battlefield 1 set in WW2.

Don't care much about it.

I would have preferred them have gone back to another war. Korean? A make shift Cold War. French and Indian War.

Hey, what about a Civil War? Nothing is ever really done with the Civil War..

I swear, Activision just needs to have three different CoD franchise games, one set in the past, the present and the Future. This way everyone can be happy and look forward to their favorite CoD game.

They should have their 3 teams work in different eras, IW could do modern, treyarch and can Vietnam and sledgehammer do ww2

Not me, I like WWll games= gritty warfare, I like present day games= real world threats, scenarios, I like future games= sci fi weapons and wall running adds a different gameplay tactic. So I just enjoy the games for what each of them bring to the table.

How on Earth does somebody get burnt out on a game they've never played before?

I haven't played through a cod game since black ops. Tried playing advanced warfare but couldn't get into it.

I've been a battlefield man these days but this might pull me back in. Ww2 on current gen systems. Can't wait. I hope they upgrade the feel and sound of the environment and weapons though.

really? all the bitching and complaining about CoD jet packs and futuristic games and now you ask if people are burned out by ww2 games?

Nope, anything is better than wall running / Jet pack jumping / super jumping / Exo suit wearing stuff as of late. That's what were sick of.

Like the author, I'm curious to see where treyarch goes with things when their game releases.
Also, Im fine with WW2. If you consider it, theres probably kids playing COD now that have never really had a chance to play a WW2 setting.. Like the author said, its been ignored for a generation.

Bringing Call of Duty to Switch Could Hold the Franchise Back

It’s Depressing How Important Call Of Duty Is To Gaming

Pokemon And Call Of Duty Have Exactly The Same Problem